Crews continue to monitor a fire in downtown Puyallup that forced nearby residents to evacuate due to toxic fumes after it started on Saturday. 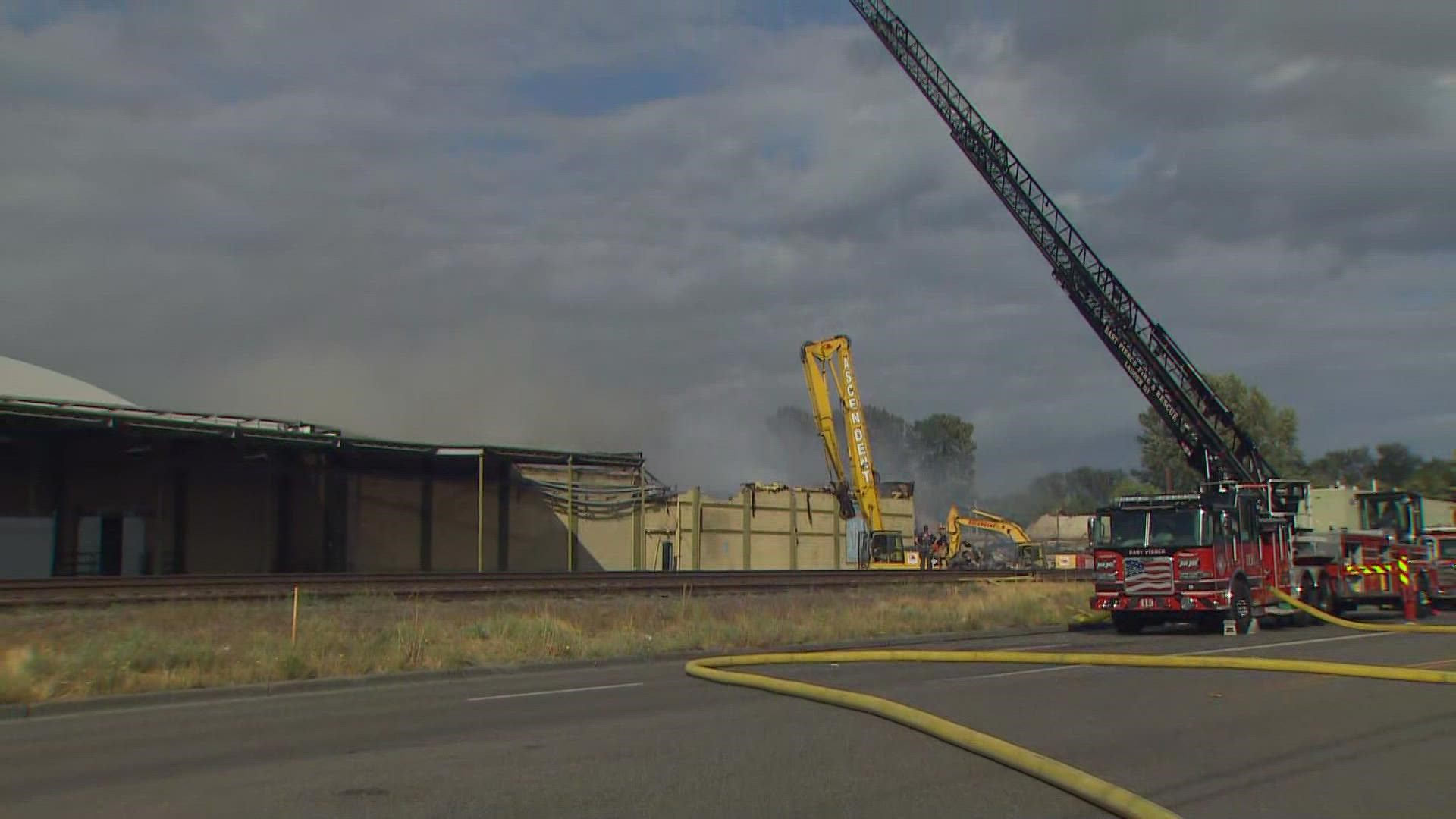 PUYALLUP, Wash. — The large fire that broke out Saturday at a Puyallup cold storage facility was still smoldering more than a day after it started.

The 3-alarm commercial fire started Saturday around 5:20 a.m. and prompted evacuations in the area due to concerns of toxic fumes.

Residents in a one-mile radius of the facility were advised to shelter in place Sunday afternoon. The advisory was lifted around 7 p.m. overnight Saturday, but residents were asked to stay inside with their windows closed and their heating and air conditioning units off.

The Department of Ecology responded to the scene to help monitor air quality in the area.

Fire crews from several departments across Pierce County continued to suppress the fire through the weekend. Some sections of the blaze were left to burn over fears of chemicals stored at the facility.

Firefighters used heavy equipment Sunday to tear down the facility's walls so they could get to hot spots and reduce the smoke.

The building contains 1,000 pounds of a refrigerant called anhydrous ammonia, according to Darrin Shaw with Central Pierce Fire. Anhydrous ammonia is lighter than air, so crews allowed the chemical to burn and rise into the atmosphere rather than weigh it down with water, which would then “coat the community,” Shaw said.

According to the Centers for Disease Control and Prevention, anhydrous ammonia is a colorless gas or liquid that can cause breathing difficulties, burns, blisters and is fatal if breathed in high concentrations.

There is still no information about what might have caused the fire. Investigators won’t be able to get into the facility until Monday at the earliest.

Some roads in the area reopened Monday morning after closing Saturday while crews responded to the fire. The city of Puyallup is updating an interactive dashboard with up-to-date road closures.

The Puyallup Police Department asked the public Saturday not to come to the scene of the fire "to try to see what is happening. We need all roads leading to the fire open for apparatus like this to help us fight the fire."

The 100,000-square-foot building is a total loss, according to a statement from the company. There were no employees in the building at the time, and so far no injuries have been reported.

Police made reverse 911 calls to about 10,000 citizens, and officers went through neighborhoods telling residents and businesses to evacuate within a 1.1-mile radius of the burn.

Police said the city of Puyallup emergency operations center is “open and active.” Any residents or businesses needing “non-emergency assistance can call 253-864-4170.”