Eight months after a Ride The Ducks vehicle collided with a tour bus on the Aurora Bridge, staff at Canlis Restaurant were among those honored by Seattle Fire and the Rotary Club for helping with the response. 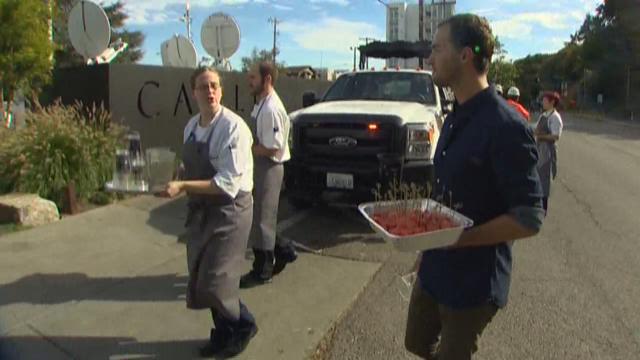 Brian Canlis was fixing a toilet in his family's high-end restaurant when one of the worst experiences of his life took place.

Not far from Canlis restaurant on September 24, 2015, a Ride The Ducks vehicle veered into oncoming traffic on the Aurora Bridge, and collided with a tour bus. Five people were killed. Canlis' staff were the first to respond.

"Off in the distance, I could see the accident," explained Canlis, in his first comments on the tragedy since it happened. "I saw dotted among the accident scene were white coats. Suddenly I was like, there were my people."

While the restaurant notably served food and water to first responders and victims of the fatal crash, Canlis said his team served something more. Affection.

"The beauty, the courage that it takes to just be with someone in a hard moment," said Canlis, "You don't have to fix them, people are coming to help. Just to hold someone's hand, to say something encouraging. That is the most inspiring thing I saw that day."

Canlis recalled a connection his pastry sous chef made with a victim of the crash. Afterwards, she visited the injured person in the hospital, spent Christmas together and months afterwards, ate dinner at the restaurant.

"It was a hard night," recalled Canlis, "But it was just incredible."