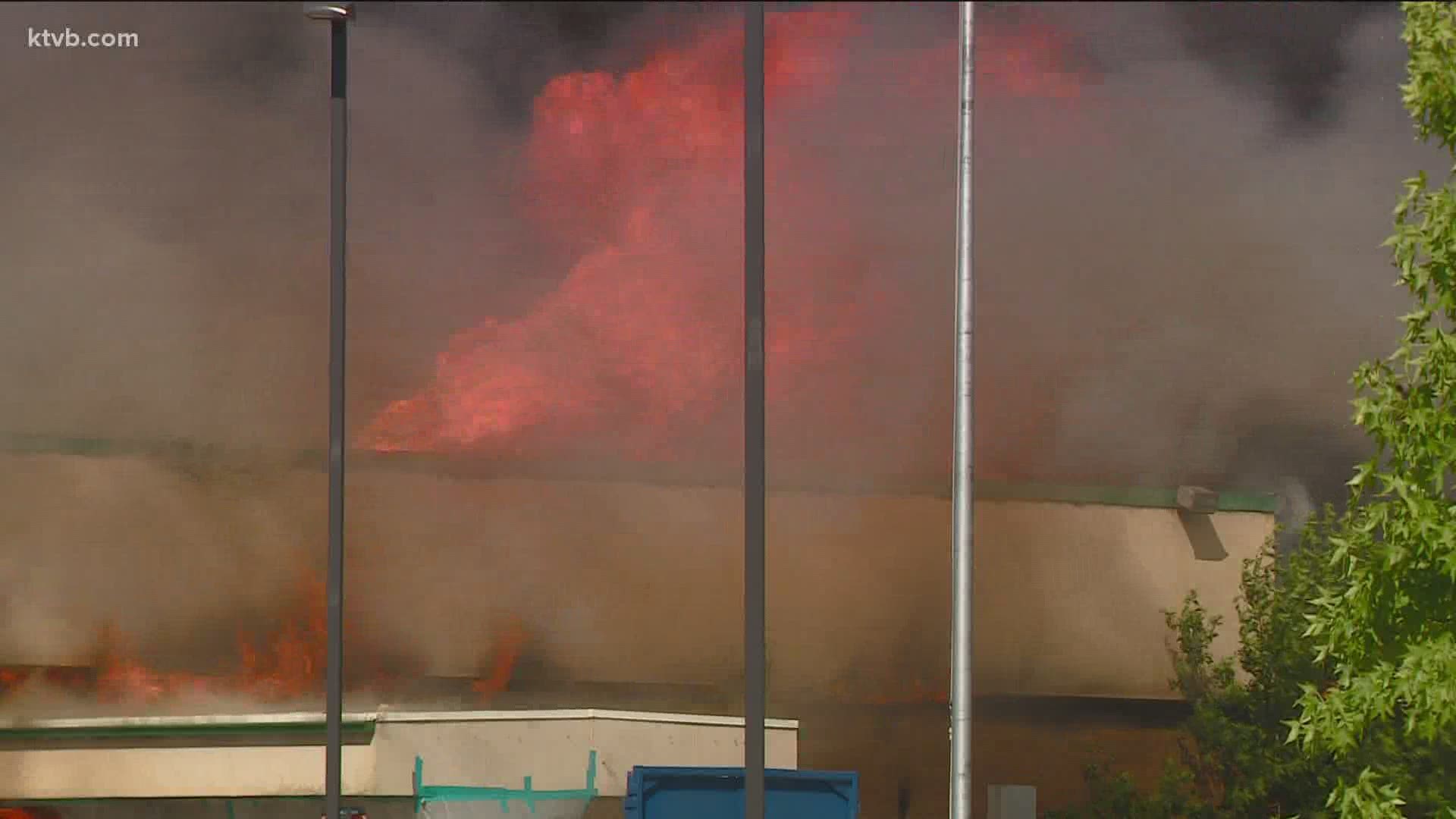 BOISE, Idaho — A Boise elementary school that was being demolished went up in flames Monday morning, destroying most of the old school.

The Boise Fire Department says the fire was reported at 9:39 a.m. at the old Valley View Elementary School on Milwaukee Street in Boise.

It triggered a large and swift response. Ten engines and three ladder trucks responded, with crews working to prevent the flames from spreading to the new school that is being built behind the old one.

The fire destroyed most of the old school. Construction crews were on scene working outside the building when the fire started.

Six firefighters were treated for heat-related injuries. Two of them were taken to the hospital for further treatment, one has since been released.

“Anytime we have a fire of this size, controlling the spread of the fire and firefighter safety are a top concern,” said Division Chief Aaron Hummel. “As part of our planning and preparation for large scale fires our Boise Fire team sets up a rehabilitation unit with assistance from Ada County Paramedics to help identify and treat heat-related injuries and return firefighters back to work as safely as possible.”

You could feel the heat from the fire from across the street.

Some nearby residents were emotional about the loss of a neighborhood institution. The building is now just a pile of bricks, glass, and drywall, leaving a hole in the community.

"There was a lot of years I spent at this school," Julie Taylor said.

And the memories that were shared within the walls of Valley View Elementary are all that remain.

Valley View calls themselves the cheetahs, but Taylor remembers her days as a roadrunner – the original school mascot.

"It's just, all these memories that are coming back," she said.

She came across the fire on her morning bike ride with only one emotion to describe the feeling - devastation.

"Oh my goodness, that's the 4th-grade classroom. then as it spread I thought, oh my goodness that's the library we used to be read to.  And it's right over the main office. And Mr. burns was our principal, and he was the best guy in the whole world," Taylor said.

She took a tour through Valley View just three weeks ago to soak the memories in before it was set to be demolished. Taylor is a speech therapist and hopes to someday work in the school that she grew up in.

"It's not just you go to school and you leave. It's part of forming your life," she said.

The building is down now, but the plan to return is still alive because she knows memories don't live inside buildings, they live inside us.

"I'd still be a roadrunner at heart, but I could do that," Taylor said.

The cause of the fire remains under investigation.

Boise Fire also issued a warning to the public to keep safe by staying away from the smoke, calling it a chemical cocktail and urging everyone to be cautious.

In March of 2017, voters approved a $172 million bond to reinvest in Boise schools. It included building a new Valley View Elementary School in the same location.

The new school was recently built and sits behind the old school.

The fire did not spread to the new school or off the property.

Demolition was underway outside the school, the cause of the fire is still being investigated.
Two minor injuries were reported from construction workers on scene. They are being treated by paramedics.

The soon-to-be demolished old Valley View elementary school has caught fire. Emergency crews are on scene. All personnel are safe and accounted for. More information as we receive it. Please avoid the area if possible.

See the latest news from around the Treasure Valley and the Gem State in our YouTube playlist: