A Blaine woman isn't letting her disability get in the way of competing in the Miss Washington USA pageant. By competing, she hopes to show the world people with disabilities can do anything they set their minds to. 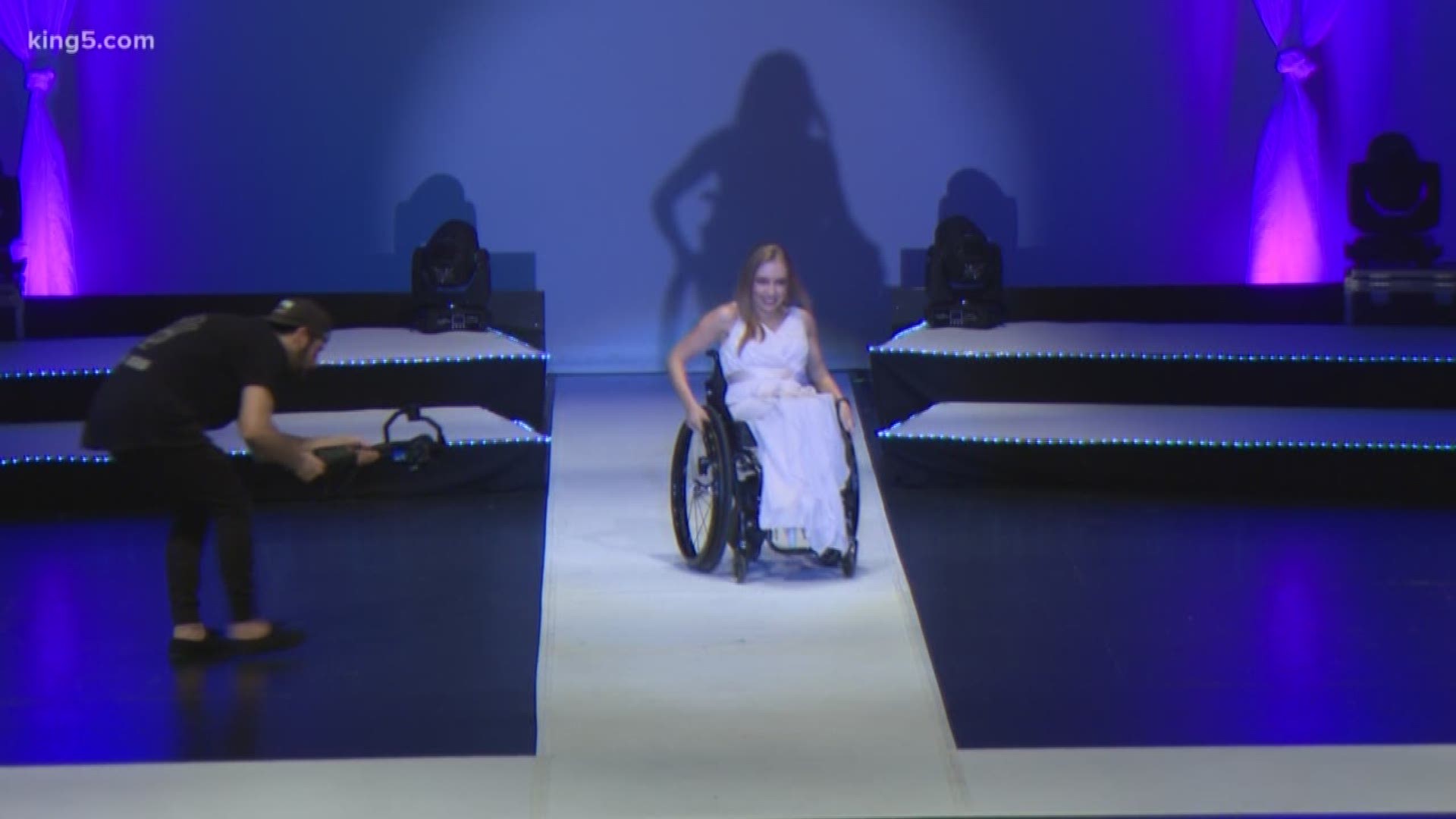 Forty-five minutes before the Miss Washington USA pageant takes the stage, dozens of young women are shoulder-to-shoulder at the mirrors lining the dressing room at the Highline Performing Arts Center in Burien. Holding mascara wands and big-barreled curling irons, they sing along to music, apply powder and lip gloss, and chat about the choreography of their group dance number.

It’s easy to miss the one young woman in the middle of the room, alone at the corner of a table piled high with handbags and sweaters, applying make-up using only the small mirror on her compact.

“I’m actually legally blind so I don’t look in the mirror when I do my make-up,” said Kyann Flint.

The 26-year-old from Blaine applies her foundation and concealer by feeling her face and relies on her mom, Jan, to help with trickier things like eyeliner.

But that’s not Kyann’s greatest challenge competing for the title of Miss Washington USA 2019. She is the first contestant to compete anywhere in the Northwest in a Miss USA pageant in a wheelchair.

“I love to do things that defy the definition of disability,” said Kyann. “I want to show the world that those of us with disabilities can be confidently beautiful as well. Right now, when you see disability and when you hear disability, the typical thought is not beauty. To me, my disability is beautiful, and I want other people to see that too.”

“Kyann is telling people you don’t have to be the norm of what society said is a beauty queen. You can be you and embrace you and love you,” said Francisco. “She’s a role model to so many people.”

The daughter of a football coach and a former teacher, Kyann has been attracted to glitz and glamour from an early age.

“She’s always been a princess from the time she was a little girl,” said mom Jan Flint.

Jan bristles when asked if she’s a pageant mom. She calls herself a tomboy, but said pageants make sense for her daughter, who loves shoes, clothes and make-up.

“She knows what she wants to do, and we just encourage her,” Jan said.

Jan has seen Kyann’s determination from the beginning.

She first noticed something was wrong around her daughter’s first birthday. Kyann’s right foot turned out during the cruising stage, and it was awkward for her to walk. Doctors chalked it up to slow development. By the time Kyann turned four, doctors decided to begin conducting tests.

“I had so many tests, tests upon tests,” Kyann recalled.

At eight years old, she was officially diagnosed with Charcot-Marie Tooth, an inherited neuromuscular disease that affects the nerves. She got her first wheelchair at age 10.

But Kyann continued having symptoms that didn’t match up with her disorder, including muscle spasms. She was living with pain at age 24, and got more testing done. That’s when she learned she had a second genetic condition: hereditary spastic paraplegia.

Kyann doesn’t want people to see her as different.

“I really don’t want my wheelchair to be looked at as taboo,” she said. “It’s a unique accessory to me, and it just helps me get around, and it’s become a part of who I am.”

An accessory she rocked on stage on Sunday, November 4 at the Miss Washington USA Pageant. Kyann represented Greater Bellingham, competing in swimsuit and evening wear against 30 other contestants.

Kyann, the 2017 Miss Wheelchair Washington, did not advance to the semi-final field of 16 women. At the end of the night, Evelyn Clark was crowned 2019 Miss Washington USA.

“I’m disappointed in myself,” Kyann said. “I’m really excited for Evelyn, though.”

Kyann said she learned a lot during this year’s pageant, and she hopes to compete again next year.

“I’m using this as a platform,” she said. “Showing the world and educating the world that those of us with disabilities can do things they set their minds to is a win in and of itself. If I can show that to one person, that would be a victory to me.”