Bill Gates speaks 1-on-1 with KING 5's Mark Wright: On polio, his foundation, and a surprise for Melinda

Bill Gates shared his thoughts on a partnership to end polio, a snapshot of his foundation’s work, and the presidential surprise he arranged for his wife. 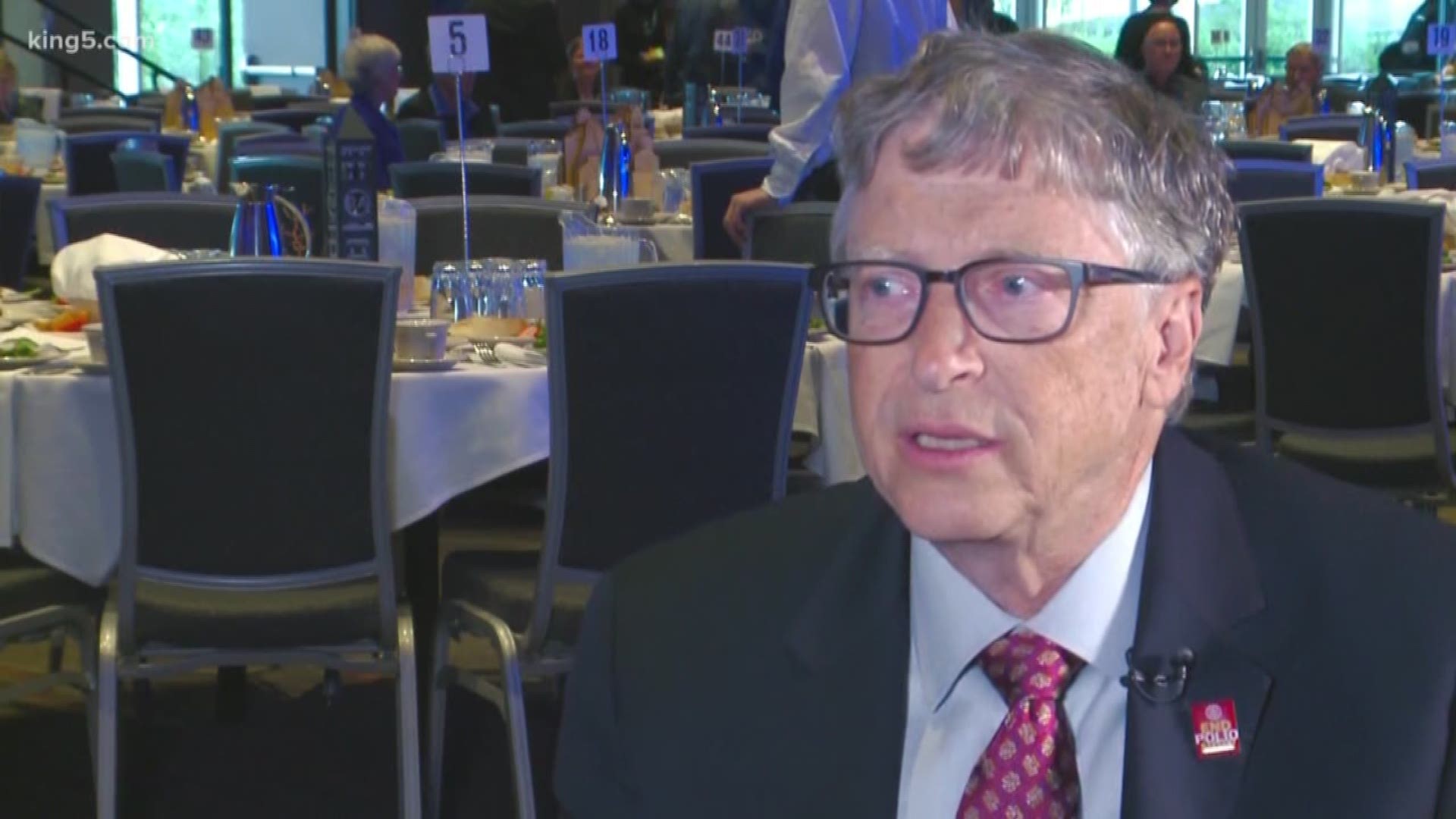 Microsoft founder Bill Gates sat down with KING 5 anchor Mark Wright over the weekend at a joint conference of Rotary clubs from Seattle and Spokane.

Gates’ keynote address Saturday night at the Spokane Convention Center focused on the partnership the Bill and Melinda Gates Foundation has with Rotary International to fight polio.

“Rotary was actually in this before the Foundation was. They were one of the original partners back in 1988.” Gates said. “They play a lot of different roles. They’ve given a lot of money to the cause. They’ve helped keep governments engaged, and they’ve also had this huge volunteer effort which is super impressive.”

Many Rotarians from Seattle have volunteered their time for decades to deliver polio vaccine to children around the world.

In 1988, more than 350,000 people a year were getting polio, a virus that can paralyze and even kill its victims. Last year, only 33 people in the world came down with the disease.

The Foundation currently is matching money raised by Rotary 2-to-1.

Since the Bill and Melinda Gates Foundation began its work in 2000, it’s helped bring about a dramatic drop in the number of children under the age of 5 who die each year from preventable diseases.

“When we got started, over 10 million children died a year. Now it’s down to about 5 million,” Gates said. “And the biggest part of that is these new vaccines for diarrhea and pneumonia, and then bed nets for malaria.”

Gates also talked about his wife Melinda’s new book, The Moment of Lift, and the stories she shares about the balance of power in their marriage.

He spoke about teamwork and brainstorming family activities with Melinda to make sure they were engaging for their children and credited Melinda for her hard work at home.

“Melinda’s always been very creative, making sure we’re looking at the family priorities and doing well on that,” Gates said in the exclusive interview.

In one particular story in her book, Melinda wrote how Bill would take the kids to school every day, which Bill joked was always a pleasure until he had to come back south on I-5 to go to work.

“It wasn’t clear when to schedule the first meeting,” Bill said. “If you leave at 8 o’clock can you make a 9 o’clock meeting?”

Bill has done his part to promote the book, including introducing Melinda on the last night of her book tour in Seattle. During his on-stage introduction, he surprised her with a message from President Barack Obama.

In the video message, Obama brainstorms possible gift ideas for Melinda before saying, “Please tell Melinda I’m committed to The Lift. We’re going to do everything we can to keep pushing until every single girl has the rights and opportunities and the freedom to go as far as they can go.”

While Bill acknowledged the video was mostly for humor, he said it was “wonderful” for Obama to come through.

“The book has been very well received, and I wanted to do my part with that small introduction,” he said.

Gates finished the introduction with an emotional moment, saying his “gift to Melinda is simply to tell her the moment we met was my moment of lift.”