'Not dead yet.' Wrestling coach Dave Hollenbeck came under fire for a post that appeared to make light of George Floyd's death under Minneapolis police custody. 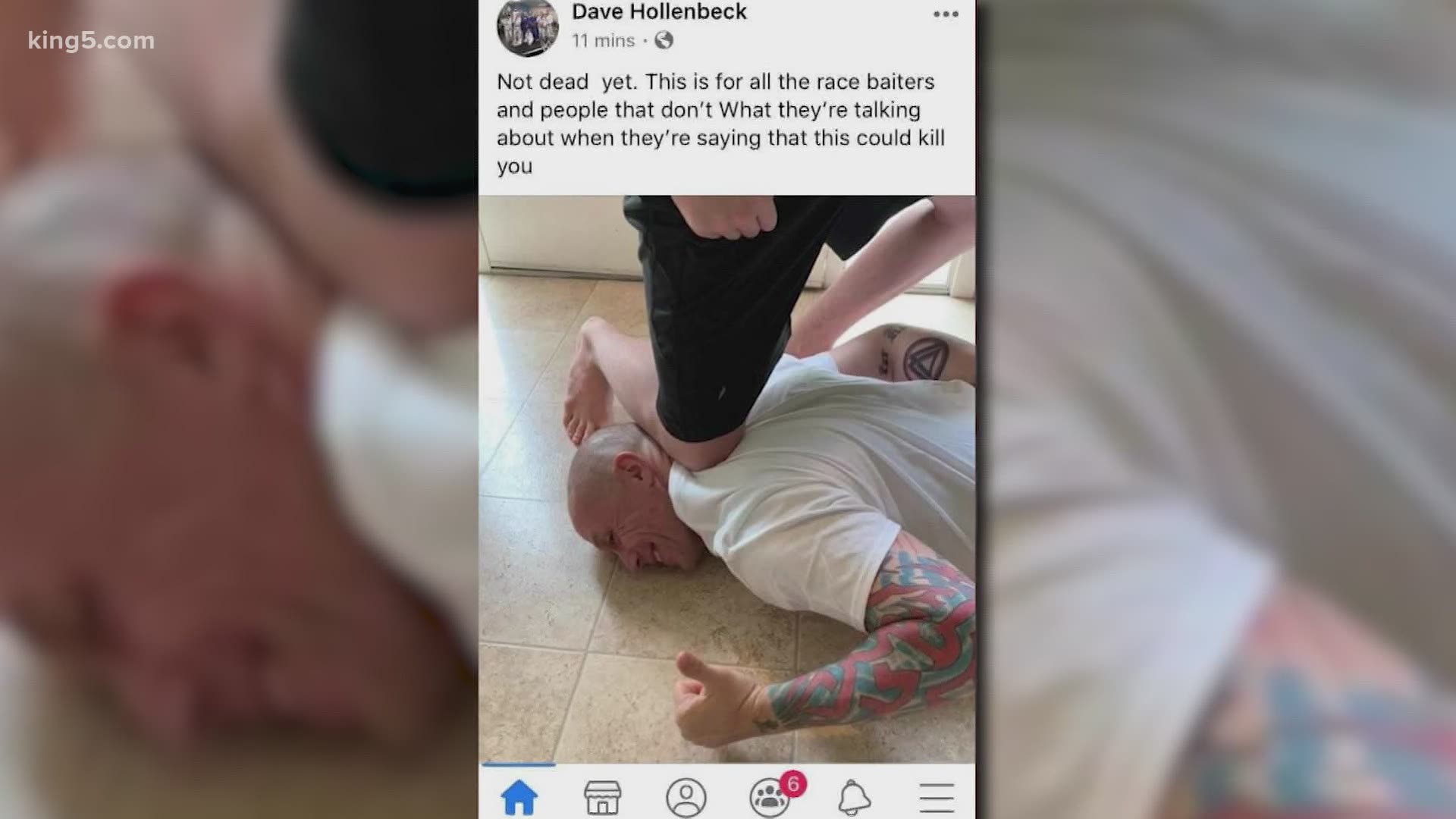 SPANAWAY, Wash. — The Bethel School District was inundated with complaints about a wrestling coach after he posted a photo of himself smiling while someone's knee pressed into his neck. The district announced Thursday that the coach was no longer employed with the school district.

The post appeared to mock the death of George Floyd, a black man who died while in police custody in Minneapolis this week.

In a post that has now been shared at least 14,000 times, Dave Hollenbeck, a first-year wrestling coach at Bethel High School, wrote:

"Not dead yet I'm doing this for Are police officers the media is a race baiting machine and I'm tired of it I'm going to speak out every time if you don't like that I'm sorry but I love All people.. Wake up America."

Another post with a similar photo attributed to Hollenbeck said:

"Not dead yet. This is for all the race baiters and people that don't What they're talking about when they're saying this could kill you."

Hollenbeck spoke with KING 5 on Thursday and defended his posts.

“I’m not an ignorant person. I understand the backlash,” said Dave Hollenbeck, a wrestling coach for Bethel High School. “I don’t believe this has anything to do with race,” he continued.

Hollenbeck said he was using his martial arts background to show that this hold can be done safely and calling himself an advocate of law enforcement.

“I stand by the technique is not what killed, my opinion, is that that technique did not kill that man,” he said.

But many who saw Hollenbeck's post called for his immediate firing, others called him outright racist, and some say it was tone-deaf.

“It causes you to wonder how long will this continue,” said Lyle Quasim of the Tacoma-Pierce County Black Collective and longtime community advocate. “To be tone-deaf and not understand what his actions mean as he influences the young people that he is paid to engage. It’s just unacceptable.”

A bystander's video showed Floyd telling police that he could not breathe when a white officer placed his knee on his neck, pinning his face against the pavement. The officer kept his knee there for several minutes after Floyd stopped moving.

The four officers involved were fired after the video became public.

Minneapolis Mayor Jacob Frey called for charges against one of the officers involved. The FBI and state law enforcement authorities are also investigating Floyd's death, which has sparked two days of protests in Minneapolis.

Hollenbeck's original post appears to have been deleted, but it was screen-grabbed and shared by other people.

In an initial statement sent to KING 5 on Wednesday, Bethel School District's Communication Director Doug Boyles says, "We are investigating the post. Dave Hollenbeck is not a teacher. This was his first year as a wrestling coach at Bethel High School. As wrestling season is over, he is not working for us right now."

Information from the Associated Press was used in this report.