There’s a new type of tunnel boring machine in town to dig the Sound Transit tunnel through downtown Bellevue. 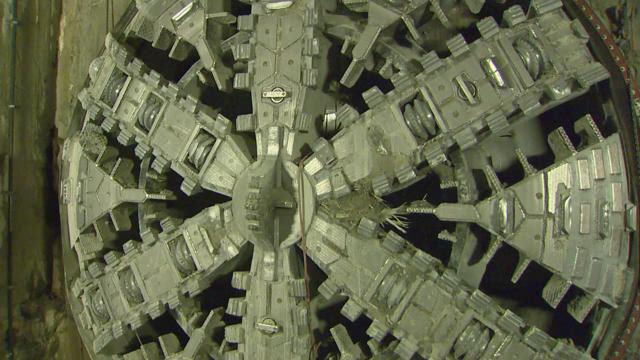 A big bit on the front is designed to chew through rocks and tough material. The whole thing is built onto a Leibherr excavator and sold through Orion Equipment of Seattle.

This machine, along with a second, were delivered to the Bellevue job site Tuesday afternoon. They are said to be the first of their kind in North America, and built in France by Germany's Leibherr, which makes a wide range of construction equipment.

It's quite a bit different than what we've seen with typical tunnel boring machines. Bertha is one of the world's biggest examples of that, now digging the Highway 99 tunnel under downtown Seattle. It digs a 58-foot wide hold. Sound Transit has also used smaller machines to dig 21-foot wide bores for the smaller light rail tunnels. This machine is said can cut a 30-foot diameter bore.

Sound Transit says it's using this technique to minimize impacts to homes and businesses. It uses the Sequential Excavation Method, also called Austrian tunneling. It chews out a section of the tunnel, and then the area around it is injected with a concrete product called Shotcrete. Finally a tunnel lining is installed.