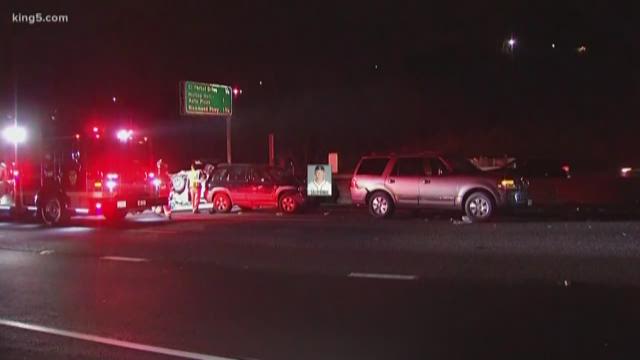 BAINBRIDGE ISLAND – A Thanksgiving weekend wreck on a California highway claimed the lives of four family members, including a Bainbridge man and his son.

Islanders Troy Biddle, 52, and Baden Biddle, 13, were among four killed in a hit-and-run, drunk-driving crash in San Pablo, California, on Saturday. Daryl Horn, 50, and his son Joseph Horn, 14, both of Napa, California, were in the same vehicle as the Biddles and were also killed in the wreck. The two youths were cousins, as Troy's wife, Amanda Horn, was Daryl's sister.

A Sacramento man was arrested later Saturday. His vehicle ran into the vehicle carrying the Biddles and Horns, causing it to flip into a lane of oncoming traffic, Hamer said.

The Sacramento man, identified as Fred Lowe, left the scene of the wreck and hit another vehicle before he was arrested by authorities. Lowe was booked into a local jail on felony driving under the influence and hit-and-run charges, Hamer said.

According to a statement released by the two families, "Troy Biddle and Daryl Horn were beloved fathers, husbands, sons, brothers, friends and coaches. Baden Biddle and Joe Horn were beautiful, caring and innocent boys whose loss will be felt by all those who knew them. The families are focusing on supporting each other and ask for privacy during this time."

The Biddles had been in California to visit family over the holiday weekend. According to the families, the dads and their boys spent Saturday playing in an annual father-son basketball tournament.

"It was an amazing day filled with pride and laughter," the families wrote.

Troy Biddle was a partner at the Seattle-based law firm Carroll, Biddle and Bilanko. Baden was a 7th-grade student at Woodward Middle School on Bainbridge Island.

Bradley Tatum, a guitar instructor on the island, said he had taught the instrument to the boy for the last six years and said he was devastated when he heard the news.

"He was an introvert around people and kinda shy, but around me he was really animated and really goofy," Tatum said. "A kid with character with an awesome sense of humor."

The two started as teacher and student and became friends through the years, Tatum said. Many of their lessons would devolve into laughing fits over the boy's exaggerated sense of humor, he added. Baden enjoyed sports and music, especially rap and hip-hop and constructing his own rhymes, Tatum said.

"He was at the age where he was really going to come into himself," Tatum said. "It felt like he was just opening that up for the rest of the world to see."

Grief counselors were to be available Monday at Woodward, according to an announcement sent out by Principal Mike Florian on Sunday.

"I know you join me in sending Baden’s family our deepest condolences during this difficult time," Florian wrote to parents.