When a disaster strikes, what happens if first responders can't come to the rescue? That was the focus on Bainbridge Island where ordinary citizens are preparing for the worst. 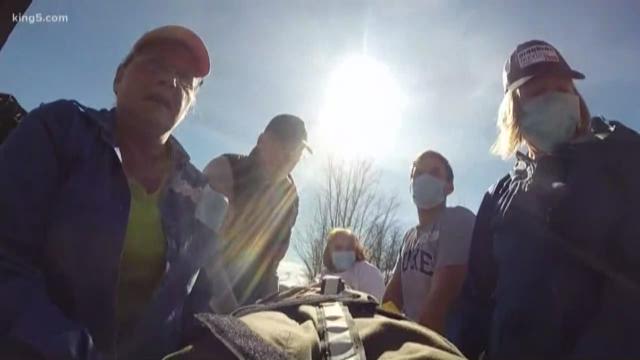 In the event of a major disaster like a Cascadia earthquake, first responders will likely be overwhelmed. In places like Bainbridge Island, there's a very real possibility the entire community could be completely cut off.

On Friday, dozens of people prepared for that day.

"If we get the community on board with understanding how we can all help we'll all be in better shape," said Karla Mather, a volunteer and nurse of 38 years.

It's called Wilderness First Responder training. While Bainbridge Island isn't exactly "wilderness," it is considered "remote" because of its dependence on a bridge and ferries to connect to critical services.

A major disaster could disrupt ferries and/or collapse the Agate Pass Bridge, meaning there could be no access to a hospital. On Friday, volunteers trained in emergency first aid, everything from setting splints to tying tourniquets. In the event of a real disaster, each volunteer would respond to emergency hubs around the island to treat the wounded.

"To me, that's just part of being in the community," said volunteer Ken Goodman. "You work with your neighbors and help them out."

While the focus has been on natural disasters, officials said, these days, it's good training for everyone to have.

"If there is a car wreck, or if you're at a concert and there's a shooting, these skills are priceless," said Bainbridge Island Emergency Management coordinator Amber Richards.