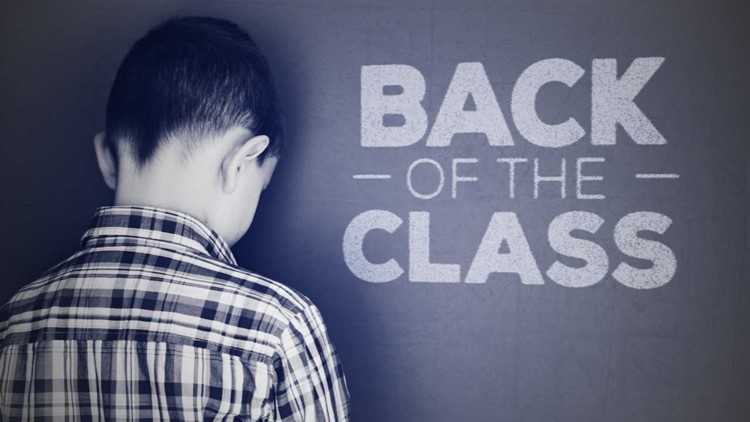 Back of the Class: An investigation into WA's special ed failures

Back Of The Class is a multi-part, on-going investigation into the state of special education in Washington.

The state lags behind most of the country in serving students with disabilities. KING 5's Susannah Frame and Taylor Mirfendereski expose that some districts are violating federal law, and the special needs students they serve are paying the price.

Cap On Funding Leaves Students With Disabilities In Limbo

Noah Lopez-Legg should — and has the right to under state and federal law — be in kindergarten right now with a free education tailored to his special needs. Instead, the 6-year-old boy with autism fell victim to an underfunded and outdated state special education system that has ultimately put his educational future in limbo.

Noah Legg-Lopez, a 6-year-old non-verbal autistic boy, watches a video on his iPad during a car ride to his Kirkland therapy center on April 4, 2018. (Photo: Taylor Mirfendereski | KING 5)

At home, Sam Clayton is an avid reader, a swimmer, a ukulele player and a drummer. But his parents worry he's just "the disabled kid" at school. Thousands of Washington kids like him are segregated and denied their legal right to learn around their peers.

Sam Clayton, a 13-year-old with Down syndrome, poses for a photo on the porch of his Federal Way home on April 5, 2018. (Photo: Taylor Mirfendereski | KING 5)

Washington has one of the worst track records when it comes to excluding kids with special needs from general education classes. But in Oregon, one district is including all students with disabilities in regular classes.

Nate Paskins, a 9-year-old with Down syndrome, looks at the camera as a fellow classmate reads to him in class at Strafford Primary School in West Linn, Oregon.
Provided

Twins Ryan and Jake Vandell couldn’t write their own names at the start of second grade. Jake could read just five words. Ryan could read two.

And thousands of other Washington students with dyslexia are failing in class because their schools won’t provide the proper help.

Ryan (left) and Jake Vandell sit together in the library at Hamlin Robinson School in Seattle on June 1, 2018. The 11-year-old Sammamish twins have dyslexia.
Taylor Mirfendereski | KING 5

A three-month KING 5 investigation uncovered a pattern of wrongdoing in the Mabton School District. Officials there violated state and federal special education laws, including the Individuals with Disabilities Education Act (IDEA) — the law that guarantees all students with disabilities receive the specialized services they need to reach their full potential in school.

This is a follow-up KING 5 investigation into the Mabton School District's special education violations.

The Eastern Washington district did more than fail to educate students with special needs. Administrators tried to cover up their shortcomings.

Yakima School District officials kicked Austin Dillinger out of school for more than 100 days in middle school. They labeled the teen, who has autism and other disabilities, as a troublemaker.

But medical professionals say that Austin didn't choose to break the school rules. He's one of thousands of Washington students with special needs who are repeatedly punished in school for behaviors directly caused by their disabilities.

Years of research show the controversial practice of isolating and restraining students is not only outdated, it doesn't work. In 2009 and 2012, the U.S. Department of Education warned against the behavior modification tactics.

Despite those recommendations and a 2015 state law that sought to limit how often the Washington school officials physically restrain and isolate students, a KING 5 review of statewide data revealed many educators continue to rely on the practices in Washington's public schools.

A former special education teacher in the Auburn School District said school administrators retaliated against her after she spoke up about issues affecting students with disabilities in her classroom.

A KING 5 investigation found this pattern:  As families push to get their children with disabilities the resources they need to succeed in school, some school districts dig in their heels. They refuse to deliver on promised services without a legal fight. It forces parents to fork out thousands of dollars to cover attorneys fees and pay out of pocket for things like private therapies and schools. The battles often leave families exhausted, stressed out and in financial ruin.

A KING 5 investigation found cases in school districts across Washington state where special education students experienced significant psychological and educational setbacks due to being physically restrained and isolated.

House Bill 1910 would eliminate a decades-old cap on the number of special education students Washington state will fund.

Washington’s two most powerful decision-makers who control the state’s multi-billion-dollar budget said Wednesday that boosting funding for special education is a top priority.

The new two-year $52.4 billion state budget, which passed Sunday, includes a $155 million increase to special education funding over the next two years.

Segregated student's life changes after getting access to regular classrooms

This school year, Sam Clayton's freshman year of high school, was the first time in three years that Federal Way school administrators allowed him inside general education classrooms, learning alongside non-disabled peers for nearly 40 percent of the day.

In middle school, Sam spent every day in a segregated classroom with other students with disabilities, including lunch.

Taylor Mirfendereski is a multimedia journalist, who focuses on in-depth reports and investigations for KING 5's digital platforms. Follow her on Twitter @TaylorMirf and like her on Facebook to keep up with her reporting. For story tips or questions, e-mail her at tmirfendereski@king5.com.