The avalanche on Washington's Stampede Pass buried three people, killing one of them. Two other members of the group were also hurt. 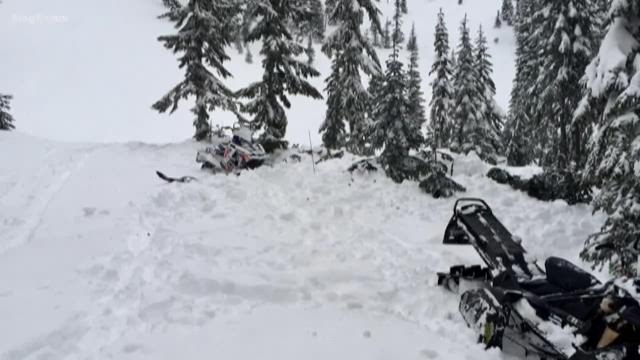 One person was killed in an avalanche on Stampede Pass Sunday. The Kittitas County Sheriff's Office says 5 people were snowmobiling 16 miles west of Cle Elum when the avalanche hit.

The group of friends took a lunch break near Mirror Lake, south of I-90 and Lake Keecheluss. The slope above them broke away and completely buried three members of the group. Two others in the group were partially buried. A 24-year-old man from Snohomish was unconscious when friends found him, but he was revived.

32-year-old Joseph Simenstad from Issaquah suffered extensive trauma in the avalanche and did not survive. His wife was also buried, but survived with minor injuries.

Undersheriff Clay Myers says: "On behalf of the Sheriff's Office, our thoughts and prayers are with the family and friends of Mr. Simenstad as they work through the loss of their loved one. We would like to remind those of you who recreate in the back country to be cautious of the past and current conditions, as they can change rapidly and without warning. Avalanche conditions are often the result of previous weather, sometimes from weeks prior. We encourage you to research and educate yourselves from the many sources available."