DOVE Transplant, an organization that finds donors for veterans, helped discover the two detectives were a perfect match for kidney donation. 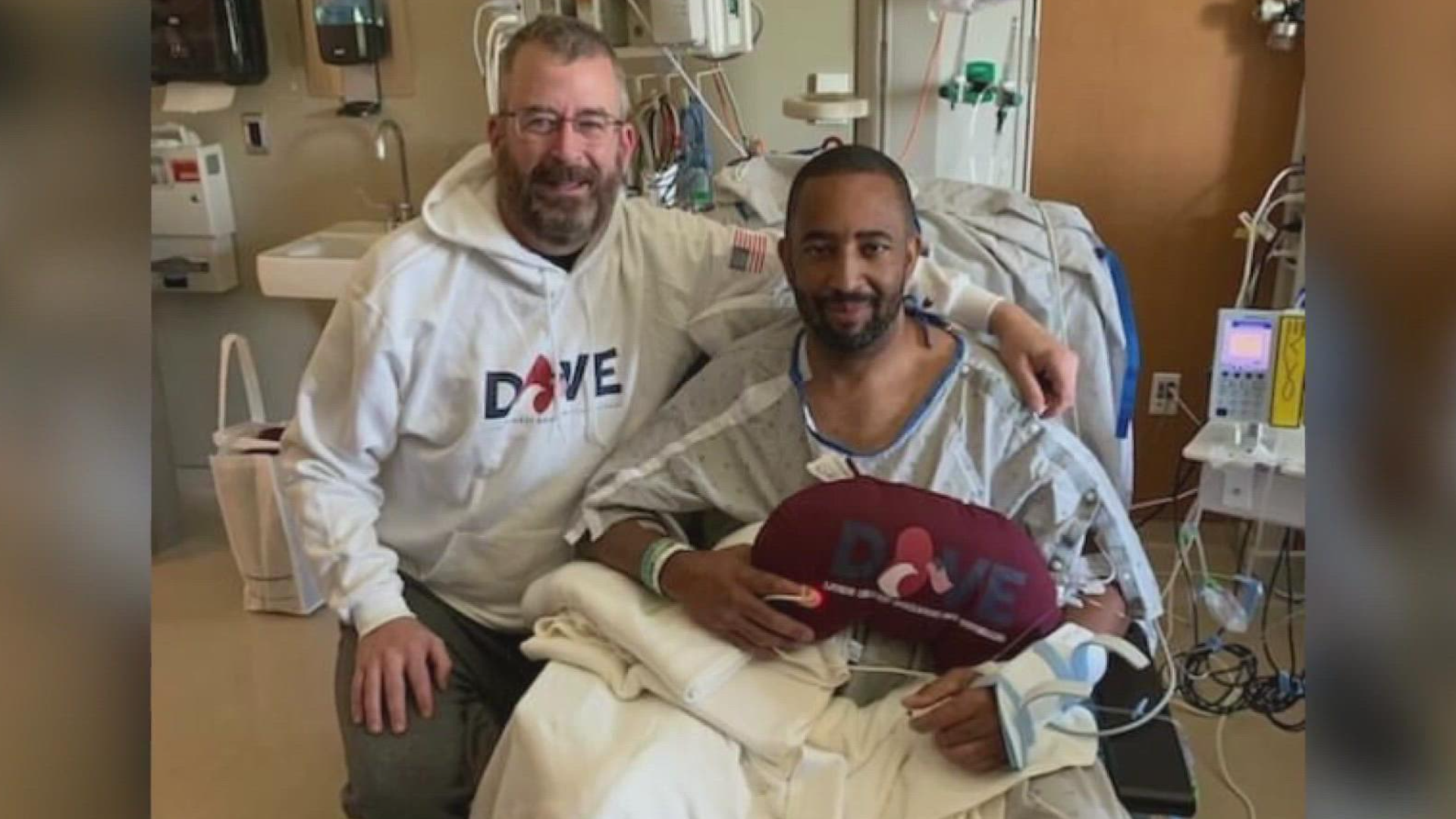 “I wanted to be with other people who wanted to fight for this country,” he explained.

Hewin did two tours in Iraq and thought the military would be his lifelong career. But in 2010, he was given some life-altering news.

“My doctor came in and told me, 'It looks like you have stage 3 kidney failure,’” recalled Hewin.

The diagnosis was shocking for Hewin as a physically fit soldier. However, with some medication and a healthy diet, he continued serving until he was medically discharged in 2014.

Shortly after, he got a job as an officer with the Auburn Police Department.

"I did my work as a brand-new police officer, followed up my regimen that the doctors had me on, knowing one day I'm going to need a kidney transplant,” said Hewin.

"Last year, I actually started dialysis on my birthday,” he said.

Hewin kept it a secret from his military buddies and co-workers in the department.

“The military community and law enforcement, we are some of the first people to jump in and help someone else, but typically, the last to ask for help when we need it,” explained Hewin.

He was told he could spend five to seven years on the organ donation waitlist before a deceased donor kidney was available.

One day he got connected with Sharyn Kreitzer, the founder of DOVE Transplant.

“There are at least 1,600 veterans in the VA or our military center that are waiting for a kidney transplant,” said Kreitzer.

DOVE Transplant is an organization that shares stories of veterans needing a kidney transplant and connects them with potential living donors.

There are currently over 100,000 people in the United States waiting for a lifesaving kidney transplant, according to the Living Kidney Donation Network.

On average, 12 people die a day while waiting for a transplant.

"The goal is one by one to get all of our veterans off the transplant list with a living kidney donor,” said Kreitzer. “By helping anyone get off the list is helping the entire waitlist.”

Kreitzer posted Hewin’s story to the DOVE Transplant Facebook page, and over 50 people, some who knew Hewin and some who didn’t, reached out interested in seeing if they were a match.

One of them being someone very close to Hewin.

"I never told Damon that I knew or read it, and I contacted Sharyn at DOVE Transplant,” said Auburn Police Department Det. Jon Postawa.

After some rounds of testing, Hewin got the word DOVE had found a donor.

“It just so happened to be the person who ended up being perfect match donor was right around the corner from me for the past seven years, and I never knew it,” said Hewin.

His perfect match was Postawa.

“In law enforcement, we train for the day, right? The day that we got to put our life on the line for somebody, whether it's a school shooting, running into a burning building, or whatever," said Postawa. "We don't know when that moment is going to come in. I look at it as I got to choose that day.”

After successful surgery for both, they are now back at work as detectives for Auburn police.

“It almost sucks that DOVE had to step in when he's down the hall and could have sent that email,” Postawa said laughing.

Now, the two have a bond much more special than co-workers.

“My battalion commander would always read from the book of John, ‘There's no greater love than to lay down your life for your friends.’ And that's what Jon did for me. I'll never be able to thank him enough for that,” said Hewin. “Now I get to see my kids grow up. I get to walk my daughter down the aisle. My oldest son just had a kid born the other day. So, I’m a grandpa now. I get to see my granddaughter grow up. And to me, that's it. There's no bigger gift he could have given me.”

This story had a ripple effect. Out of everyone who came forward to help Hewin, another match has been found for a veteran.

"Sharyn with DOVE Transplant is awesome. I encourage people to reach out to her and have that conversation. It doesn't hurt to have a 10-minute conversation and see what it takes,” said Postawa.