Nearly 1,500 Asian giant hornets in “various stages of development” were found in a nest in Whatcom County. The nest was eradicated on Wednesday. 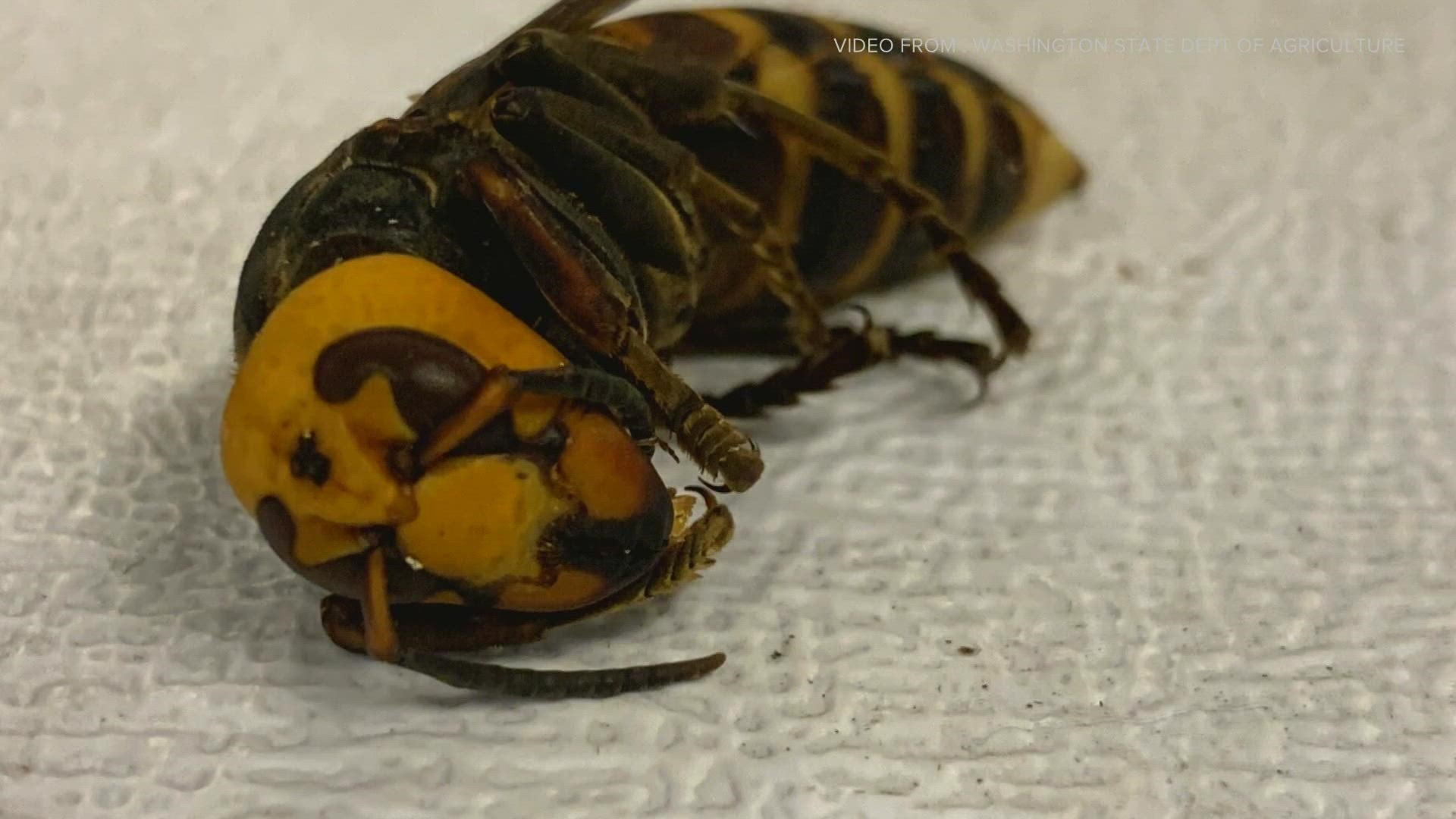 SEATTLE — An Asian giant hornet nest found in Whatcom County last week has been eradicated, according to the Washington State Department of Agriculture (WSDA).

Asian giant hornets are invasive to the U.S. They are known to attack and destroy wasp and honey bee hives. Just a few giant hornets can destroy a hive within a matter of hours.

The nest was found at the base of a dead alder tree east of Blaine. The WSDA said the nest was about one-quarter mile from where a resident reported a sighting of a live Asian giant hornet on Aug. 11, which was the first sighting this year, and about two miles from the nest eradicated last October. 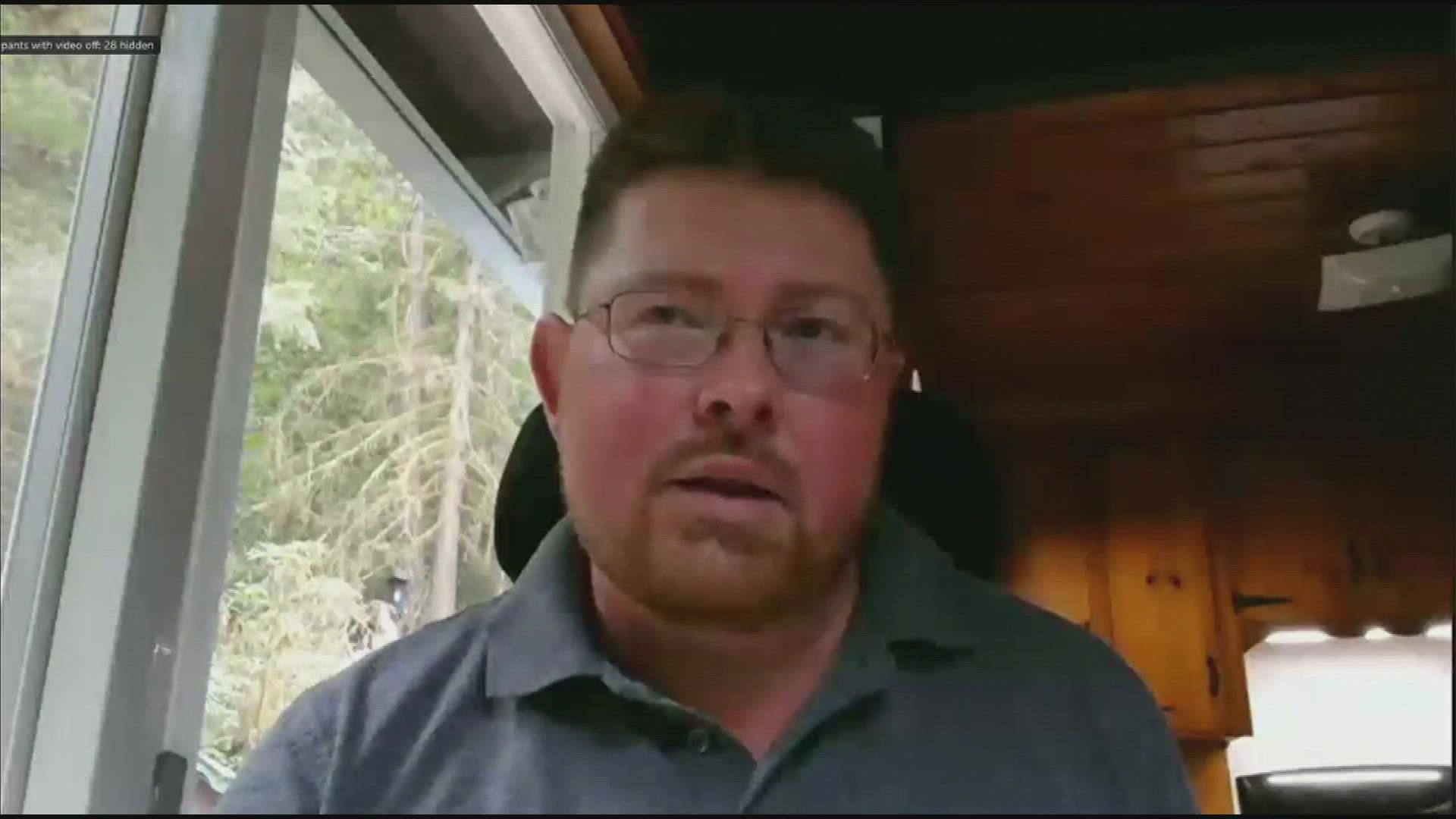 Nearly 1,500 hornets in “various stages of development” were inside the nest, including one queen, 292 eggs, 422 larvae, and 563 cap cells inside the nest. Spichiger described a cap cell as a hornet that is about to be produced. Also, 195 worker hornets were either vacuumed from the nest or captured by a net Wednesday.

For comparison, the Asian giant hornet nest eradicated in October 2020 had about 500 hornets in different life stages inside, Spichiger said. Officials said they had “no idea” why this nest was three times larger than the one found in October but said the success of any nest depends on the hornet’s food supply and that likely played a role.

After the worker hornets were removed, WSDA staff removed the bark and decayed wood from the entrance of the nest near the base of the tree. Spichiger said the hornets excavated the interior of the tree to make room for the nest, which consisted of nine layers of comb.

The WSDA said a portion of the tree was cut and sent to Washington State University Extension in Bellingham for further analysis.

No WSDA staff were injured while eradicating the nest. However, Spichiger said hornets attempted to sting some of the staff, but the team’s safety gear worked well and the insects were not able to sting through the suits.

The insects are believed to have been more aggressive at this nest compared to the last one discovered in 2020 because of the warmer temperatures. Most insects are not as active as normal in temperatures below 50 degrees.

Some of the hornet larvae will be kept alive in a controlled setting so the WSDA can do experimental testing to see if other attractants are more effective. The rest of the hornets in the nest will be destroyed.

Officials said current data did not suggest there were other nests in the area but urged the public to report any Asian giant hornet sightings.

“While we are glad to have found and eradicated this nest so early in the season, this detection proves how important public reporting continues to be,” said Spichiger.

The WSDA said it would continue trapping Asian giant hornets through the end of November. Anyone who would like to set their own traps can find instructions on the WSDA website.

WSDA encourages anyone who spots an Asian giant hornet, whether alive or dead, to report it by clicking here.

“We expect there are more nests out there and, like this one, we hope to find them before they can produce new queens. Your report may be the one that leads us to a nest,” said Spichiger.

Then asked how long it would take to eradicate the hornets, officials said it would be at least three years before full eradication was official due to protocols. Still, with so much land, experts believe it will be years before the hornets are completely gone from the state.

"We stand a good chance still. Only one nest and one report right now. In the next five years or so, we’re hoping not to have more pressers," Spichiger said.

Just the one report so far this year is encouraging, according to WSDA.