Durkan says the deal protects taxpayers and is good for the city. She says it does not block other possible arena projects. 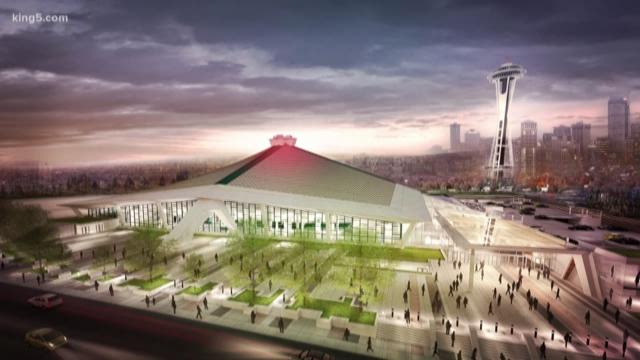 It was with purpose that a ceremonial bill signing happened near an ice rink. Seattle may be skating into new territory.

On Wednesday, Seattle Mayor Jenny Durkan and Oak View Group Founder Tim Leiweke signed a $660 million Memorandum of Understanding, which clears the way for a new, privately financed arena at Seattle Center by 2020.

Durkan ripped open her jacket at one point during the largely celebratory news conference to reveal a Sonics t-shirt underneath. This event had all the indications of a city and a developer trying to make an impression for the NBA and NHL. Leiweke at one point, backed by multiple councilmembers and executive staff, recited the history of Seattle sports, and at one point, appeared to choke up saying, "Ten years ago, you had your heart ripped out. We're gonna get you a team."

Multiple people at Seattle City Hall have told KING 5 they believe the NHL will make some sort of announcement about the project soon. Durkan said Wednesday she has not spoke with NHL Commissioner Gary Bettman, but the league's owners will meet for long planned meetings on Thursday and Friday.

The NHL says officially Seattle is not on the agenda, but longtime and well respected NHL writer Bob McKenzie said on Canadian Broadcaster TSN that Seattle will be discussed. He does not believe a franchise will be awarded to Seattle this week, but that it could designate University of Washington grad David Bonderman and movie producer Jerry Bruckheimer as "owners to be," allow OVG to solicit season ticket requests or open a formal expansion process.

In an interview with KING 5 as part of the Next Best Pod, Leiweke would only say about the NHL: "I think people will be pleased with our progress, and I'll leave it at that."

He added that the new arena will include 2,200 club seats for the NHL and more for the NBA to suit the economics of each sport. He added that his group has been approached by multiple people who are interested in NBA team ownership.

The MOU does call for a transportation plan, and Leiweke says the $40 million that his group has committed will help.

"We have a temporary 12-year gap that we have to fill," he said, eluding the time between the arena opening and when light rail gets to Seattle Center.

He says that money will be used to pay for more traffic sensors on Mercer, which he claims will make it "40 percent quicker in and out."

Leiweke said he realizes that enthusiasm may be diminished for his project after so many years of discussing the subject in Seattle.

Related: How the Seattle Center arena rose from the SODO ashes

The deal also now puts plans for the WNBA's Seattle Storm into hyperspeed. The franchise has called KeyArena home since its inception and will have to vacate for two years during construction.

"I think it's time for a new arena, and we're excited," said Storm President Alisha Valavanis, who stood behind Leiweke at the news conference.

However, it is still looking for a home and is exploring UW's Alaska Airlines Arena at Hec Ed, and the arenas in Everett and Kent.

"We're really excited," Valavanis said. "With that said, our priority is a home for two years."

The signed deal comes after the expiration of another city MOU to build an arena in SODO.

Durkan was very careful in her campaign not to favor Seattle Center or SODO. She said Wednesday the OVG deal does not prevent an arena in another part of the city, and even acknowledged meeting with the Chris Hansen investment group before the Council decision on KeyArena. The Mayor said the options are still open for the city and Hansen. Yet, that project has never been able to deliver an anchor tenant to begin construction.