Seattle gets closer to pro hockey team with NHL board approval 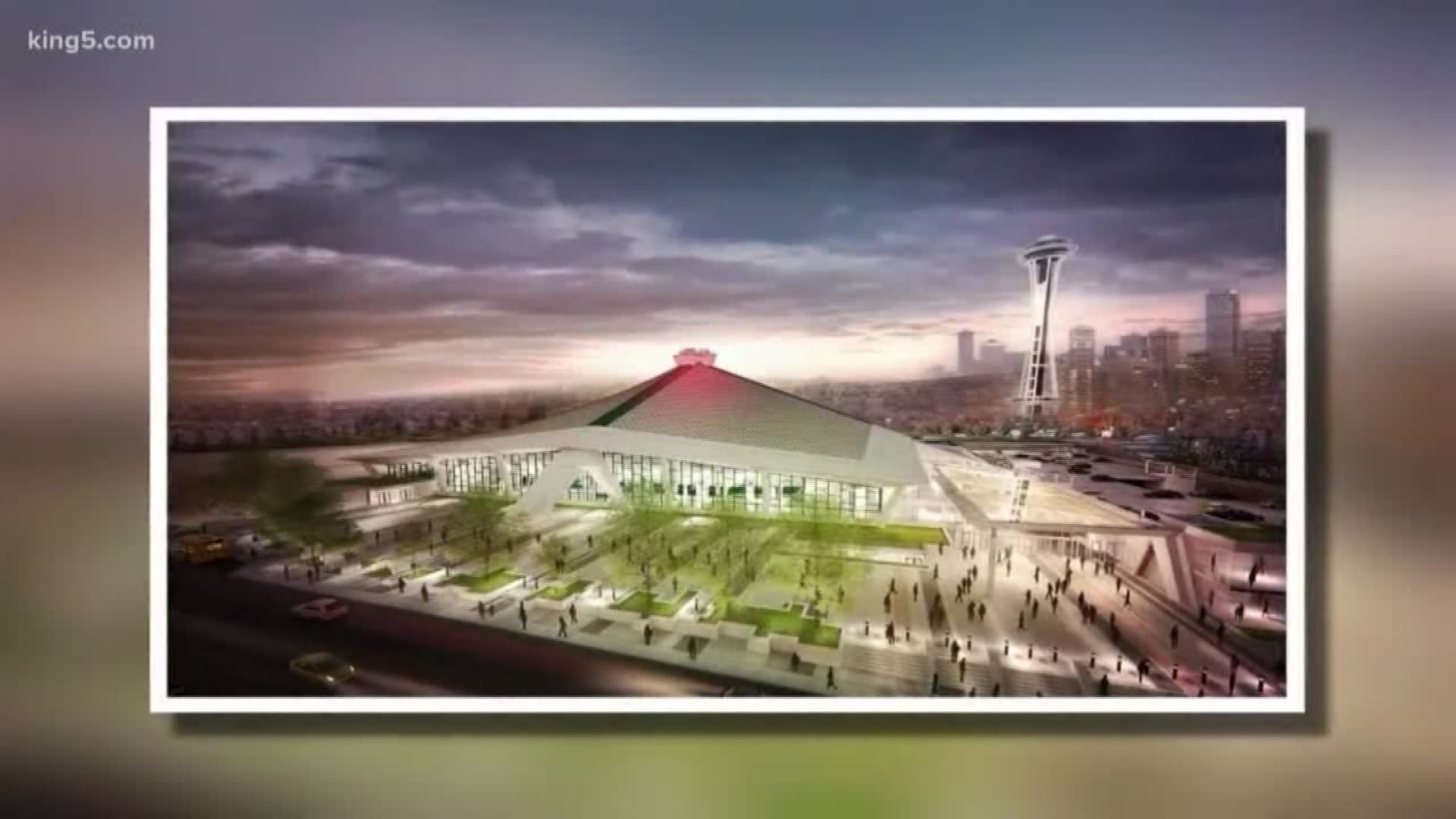 The National Hockey League's Executive Committee is recommending that Seattle's bid for a professional hockey team moves forward. The recommendation was unanimous.

The Executive Committee is made up of ten influential NHL owners. NHL Commissioner Gary Bettman says the committee's recommendation was: "Let's do this."

Though the committee asked a 'fair amount of questions' during the meeting, according to Mayor Durkan, she said, "Seattle sells itself." Durkan said she was confident the plan to build a new Seattle Center arena would move forward. Construction on a new arena is contingent upon the city being awarded an NHL expansion team.

According to people in the room, the presentation lasted about 90 minutes and included the Seattle Hockey Partners' vision for Seattle Center, as well as details on a team headquarters and training facility. They also showed a video highlighting the history and future for an NHL franchise.

Boston Bruins owner Jeremy Jacobs, who heads the Board of Governors, and was in the committee meeting, called the presentation 'wonderful' and noted Seattle was a 'great town.'

There is still work to be done on Seattle's part. But if things go according to plan, there could be a final vote by all the owners to expand the NHL to Seattle by early December, according to NHL Commissioner Bettman.

The commissioner said he presumed it would be approved, and that the league and the Seattle group are both aiming for a 2020 launch. He said Durkan, in particular, did "an excellent job of presenting the case for Seattle as a city, and as a base of enthusiasm for NHL hockey." He ticked off all the reasons to reporters, including the fact it's one of the fastest growing cities in the country, geographic balance for the league, the ownership group, plans for the arena, and 'all of the bases to be touched.'

The result of Tuesday's meeting will chart the course for the KeyArena remodel.

It is a meeting years in the making, depending on who you talk with.

Some say the story started back in 1974 when the NHL first awarded Seattle an expansion franchise to begin play in 1976. The league had to rescind the offer because of ownership financial complications.

Others might say it was in 1990 when Barry Ackerley led a group to buy an NHL team and put it in his new SODO arena. The bid mysteriously fell apart and so did his arena plan, leading all roads back to a renovated Seattle Center Coliseum and the existing KeyArena. 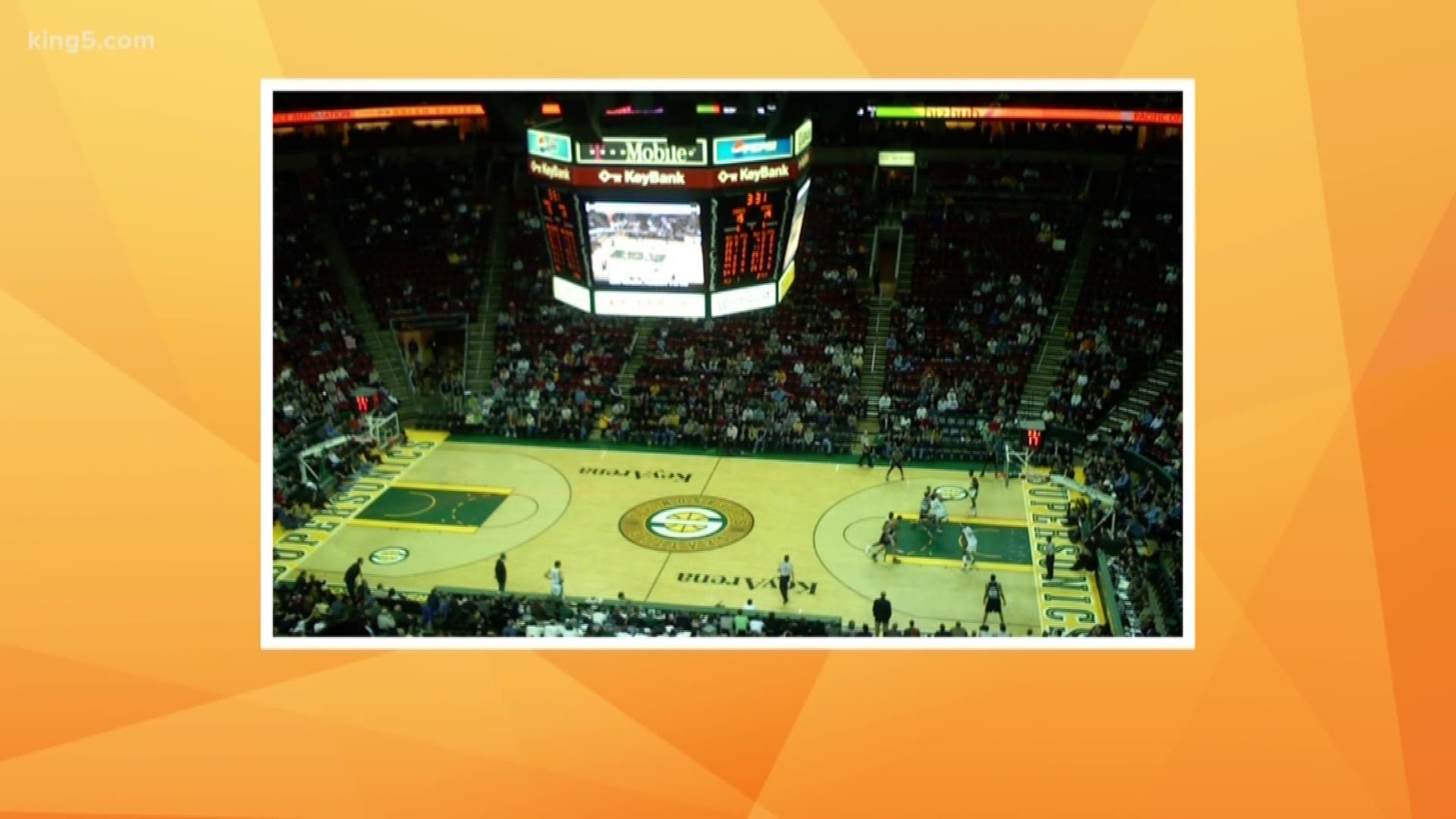 Yet others might say the story started when the Sonics left the Key in 2008.

Seattle Councilmember Debora Juarez believes it started early in 2016. The then-newly elected official noted the city was debating whether to allow for a new arena to be constructed in SODO, and said city leaders were getting hints that the NBA was interested in another plan.

“This started with trying to bring back the Sonics,” Juarez said this weekend. “We wanted to figure out the best path forward to bring them back, and started focusing on the KeyArena site.”

When the SODO street vacation vote was narrowly rejected by the council, Juarez, who represents North Seattle, got closely involved. She was appointed the Seattle Center Committee Chair, and was told former Seattle Mayor Ed Murray was going to recruit potential developers. Murray was given the blessing to do so by Chris Hansen, who was leading the SODO effort.

“We wanted the Sonics,” she said bluntly.

However, the NBA made it clear they weren’t expanding or relocating a franchise, and two groups, AEG and the startup Oak View Group, were ready to play ball. OVG is led by Tim Leiweke, who used to run the other company, and whose last name may be familiar to Seattleites. His younger brother, Tod, ran the Seahawks and was heavily involved in the community at the time with charities such as the United Way.

OVG had credibility and in a request for proposals brought forward big investors with ties to the NHL and NBA. OVG said it worked out a side deal with Delaware North to be the concessionaire. It was a small but important point, because the company is run by Jeremy Jacobs, who owns the NHL’s Boston Bruins and is the head of the NHL’s Board of Governors.

It didn’t take long for Leiweke to introduce University of Washington grad David Bonderman, whose net worth is close to $2 billion, and Jerry Bruckheimer, whose movies have been a cultural, critical, and financial success. They would be the majority investors and made the city realize it was a serious bid.

Bonderman and Bruckheimer had kicked the tires on owning an NHL franchise. The idea dates back several years when they explored making a bid for a Las Vegas team. Bonderman, by one City Hall account, told elected leaders he was “all in” on Seattle, the place where he received his college education and where he still has an UW endowment in his name.

The NHL, which has been keeping a serious eye on the market since 2011, was intrigued. It had watched the SODO plan, along with other ideas in Tukwila and Bellevue. It was convinced one of those groups would bid during an expansion process in 2015. Instead, NHL Commissioner Gary Bettman could not hide his frustration when only Vegas and Quebec City filed applications. That threw a wrench in the league’s long-term vision for balancing the conferences. The NHL granted Vegas it’s team and put Quebec on hold.

Bettman surprised many when he walked out of a Board of Governors meeting last December to say his league was going to again consider expansion, but only from Seattle, only for a $650 million price tag, and only from Bonderman and Bruckheimer.

It also helped to chart a dual course for the group before the city and with the league. Seattle’s leadership set a schedule to fine tune and negotiate a Memorandum of Understanding for a new arena into final transaction documents. Marshall Foster, who led the city’s negotiations, let it slip during one meeting earlier this year; it was all to make sure it was done in time for the NHL and the 2020 season.

It was clear the city knew it needed to get the deal done in time for this week’s meeting.

On September 24, the council unanimously approved the $700 million arena proposal, which also includes $40 million for transportation, $10 million for YouthCare, and another $2.5 million for affordable housing. It will be a gut remodel of the site, save for the old 1962 era roof. OVG says it could open by October 2020.

Leiweke said after the vote, “Many people said it just couldn't be done. I am so proud of my brother who had the courage to defy critics, who kept dreaming when others said it can't be [done]... and now we really get to dream.”

Durkan signed the final legislation the following day in front of KeyArena.

The final deal included a clause prohibiting demolition of KeyArena until an NHL team is officially awarded to Seattle. Bettman and his chief lieutenant, Deputy Commissioner Bill Daly, have hinted that they don’t see a final vote until December. However, a strong indication of some sort could make Durkan waive the clause to allow OVG to begin earlier. Tim Leiweke told reporters after the September 24 vote that he’d like to begin construction in the next 30-60 days.

It wasn't exactly clear if that clause would be waived as a result of today's recommendation. Bettman deferred to the city, but Durkan was on a plane and not immediately available.

The last public event at KeyArena is scheduled for this Friday, October 5, when the NBA’s Golden State Warriors play the Sacramento Kings.

The scene, which will include former Sonic Kevin Durant, will likely resurface emotions for Seattle basketball fans still mourning the team's loss.

Seattle Center Director Robert Nellams, a Seattle native, says he remembers the energy of the mid-90’s KeyArena, calling it “phenomenal" and "electric." He was tasked with keeping the building functional after the Sonics abruptly left in 2008.

“We turned not only the arena around – I don't want to go too far out with this – but I believe work we did was the foundational pieces that led the Oak View Group to come in and say if the public sector can make a profit on this, we can probably do really well too,” Nellams said. 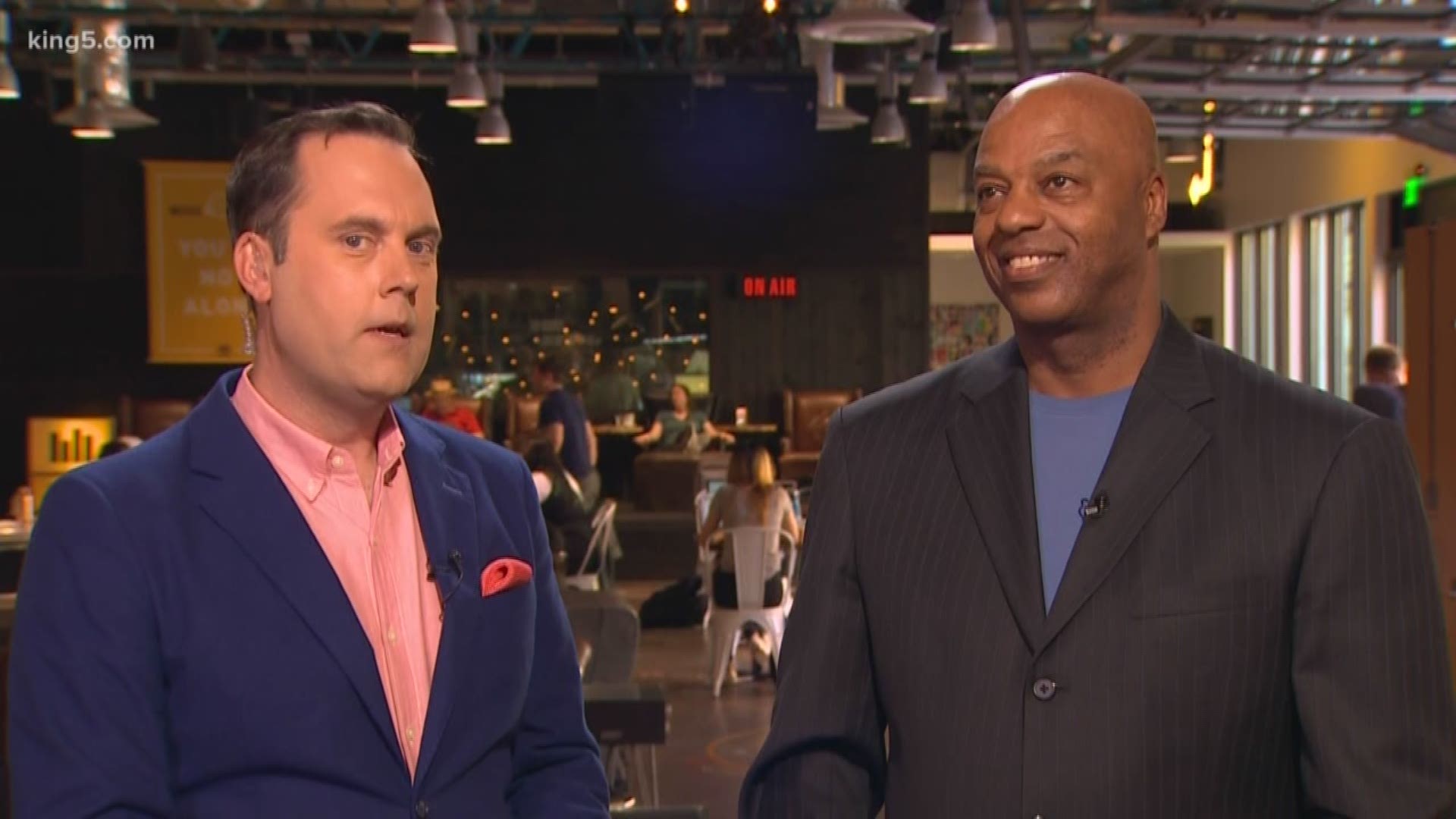 Seattle Councilmember Sally Bagshaw, whose district includes the arena, talks fondly of having court-side seats for a Seattle SuperSonics-Phoenix Suns game, seeing Madonna play live, and the WNBA’s Seattle Storm becoming a civic treasure in the building. She says she worried about it becoming a “white elephant” or drain on Seattle. Now, she believes those 80's and 90's memories will come flooding through with the last event and then the new arena.

“It will bring back life to the neighborhood," she said.

But that’s all dependent on this one last piece.

“The NHL is going to be cool, so cool,” said Juarez, who maintains she and Durkan have continued to have conversations with the NBA league office during the last couple of years as well. “We get this done, and then we’re going to bring the Sonics back.” 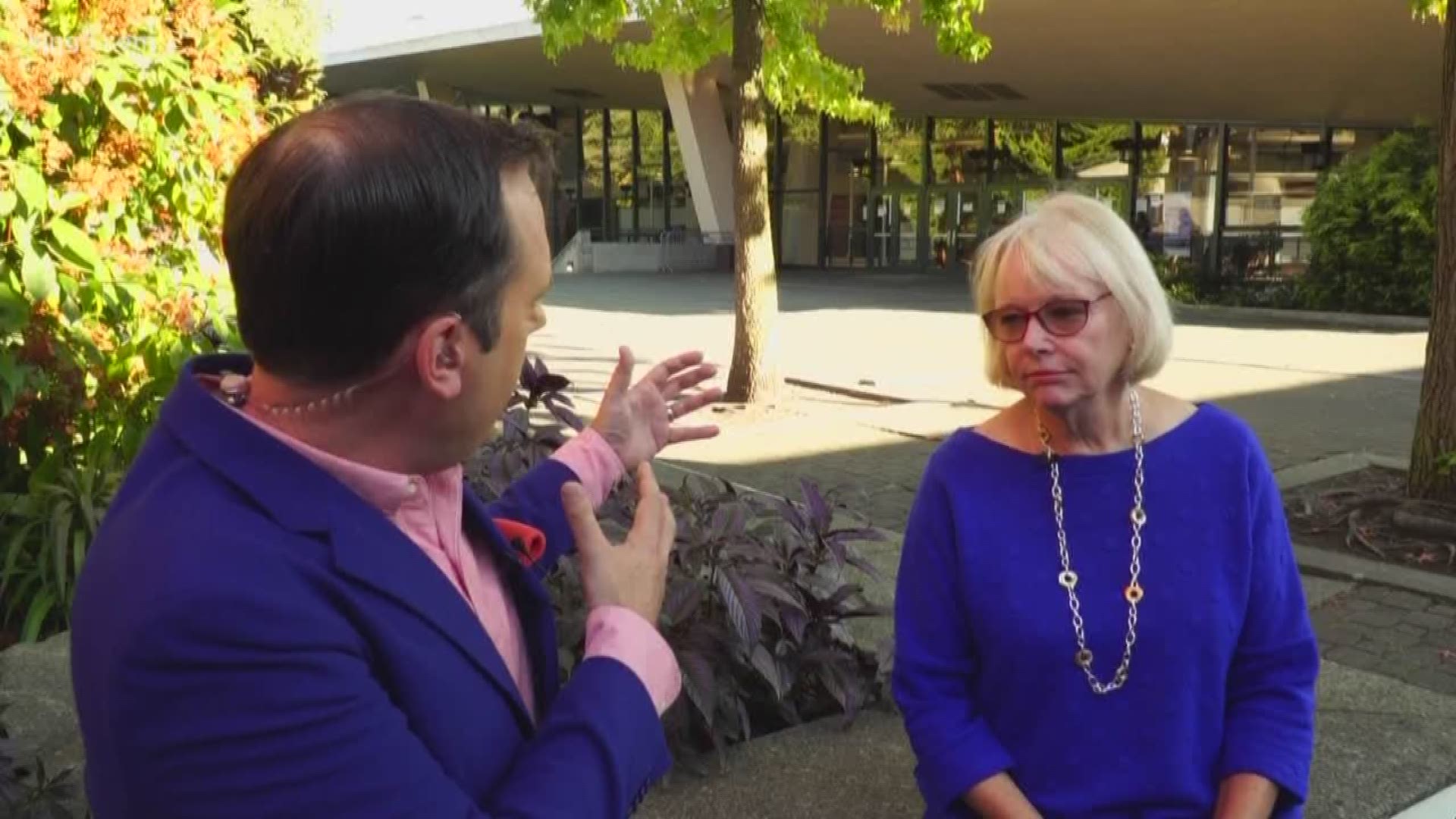