David Bonderman, Jerry Bruckheimer and Tim Leiweke will kick off a season ticket drive Thursday and are making a big push to close a deal with the NHL over the next several months. 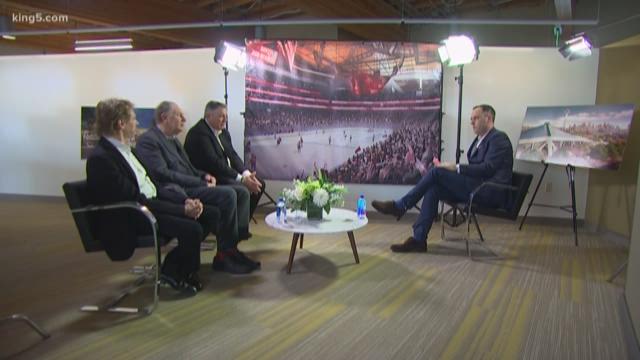 Bruckheimer, a well-regarded film and television producer, said Seattle is one of the best sports cities in the country, and a big reason why he wanted to get involved in the project to build an arena at Seattle Center and acquire an NHL franchise.

Related: How to make a deposit for Seattle NHL season tickets

"I love the sport and I play the sport," said the producer of hits like "Pirates of the Caribbean," "Top Gun," "Bad Boys," and "Beverly Hills Cop." He describes sitting next to Leiwke for years at LA Kings games and being introduced to Bonderman after that.

"We've met 10-15 years ago, and we've been looking at a franchise off/on ever since," said Bonderman, the UW grad, who graduated "more years ago then I care to admit. So the stars, sun, and moon sort of aligned here." He'll be the lead investor and managing partner. "Jerry will be very involved as a kind of soul of the team."

They played coy when talking about the team name, saying they've received 40 to 50 suggestions. Leiweke did rule out a green and gold color combination, saying it would be reserved for a future NBA franchise and that "we're extremely respectful."

The appearance was just a day before the group will kick off a season ticket deposit campaign. The group is soliciting $500 to $1,000 for each ticket and says the refundable deposits will be put into a community fund and be returned if people decide not to purchase tickets next year.

It is clear the group is going to make a big push in the next few months to close the deal with the league. Bonderman said he believes the league will make a decision by June, depending on the outcome of the ticket drive. In fact, he joked the league has been involved in every part of the discussion and that he had just talked to NHL Commissioner Gary Bettman 15 minutes prior.

"By June, Gary Bettman will look at us and say, 'hey that's a great market, we should be there,'" said Bruckheimer.

You can sign up for tickets starting Thursday at 10 a.m. at NHLSeattle.com.

Leiweke says he still believes demolition can occur at the KeyArena site beginning in October, with a plan to open the New Arena at Seattle Center in October 2020.

"We are right on target, right on plan. Our goal is still to be in October doing demolition. We want to get through that health clinic because I know that's a huge, major important event for the community," said Leiweke. They downplayed any notion that it would be a Bruckheimer/Hollywood production either.

Leiweke says he's aware of a proposed NBA exhibition game at the Key in October and that "if that happens it's fantastic," calling Golden State Warriors' President and Seattle native Rick Welts a friend. "I go back to him often." But Bonderman joked, "as long as they don't mind playing between the 2x4's it'll be fine."

Bonderman, who is also a minority owner of the NBA's Boston Celtics, also said he's expressed his interest in bringing an NBA team to Seattle Center. "Yes, we've shown that to the commissioner - the other commissioner not Mr. Bettman, but Mr. Silver - and I've been involved with the Celtics for a dozen years, gotten to know the people there. If there's a franchise we'll go after it."

Bruckheimer says there are plans to build additional ice rinks and a practice facility for the NHL franchise. But the first step, as Bruckheimer repeatedly enforced, is to sell ticket deposits.

"The most important thing is tomorrow - and then we'll face everything else," he said. "Everything comes after that."