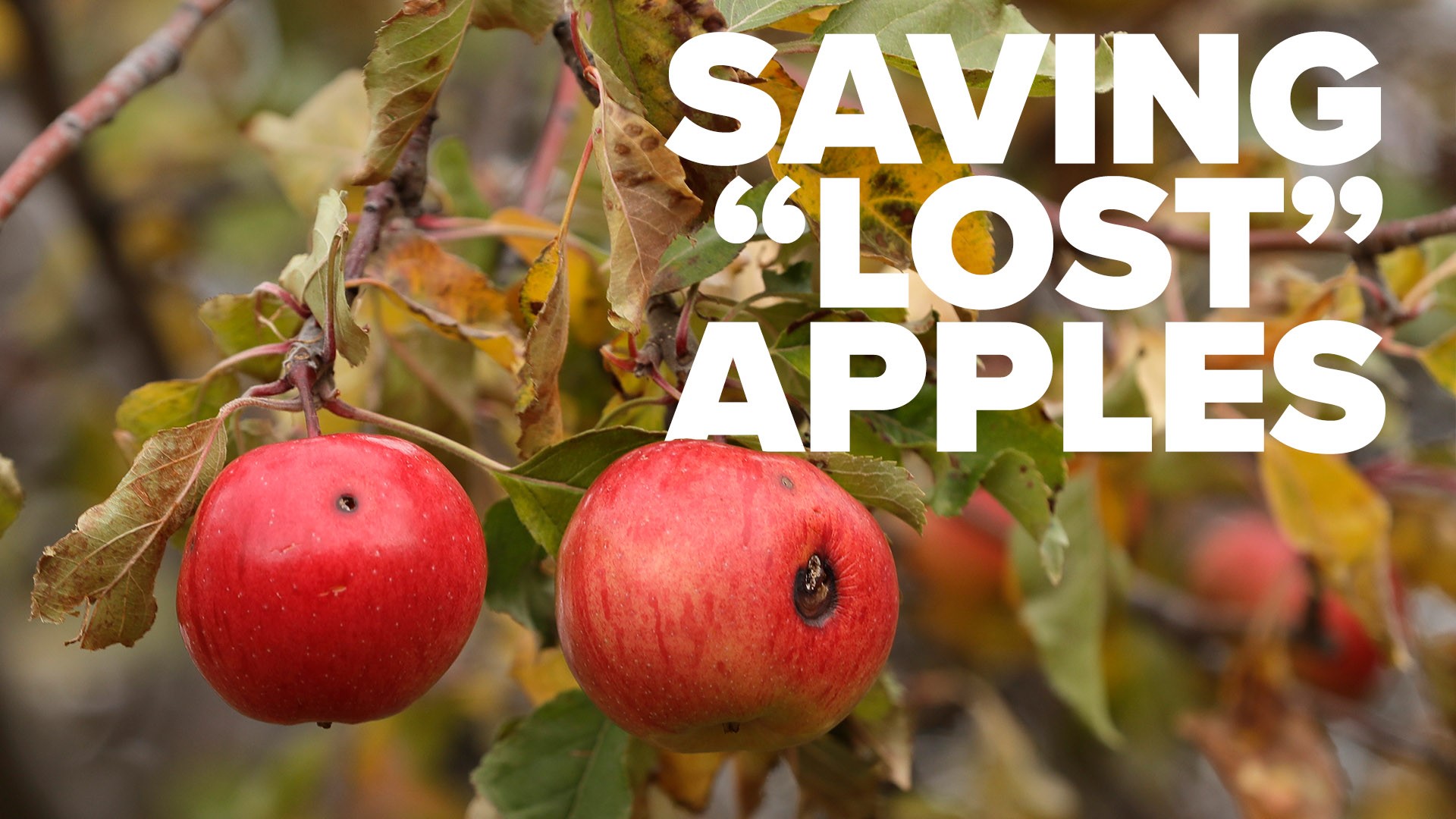 PULLMAN, Wash. — The apple tree stands alone near the top of a steep hill, wind whipping through its branches as a perfect sunset paints its leaves a vibrant gold.

It has been there for more than a century, and there is no hint that the tree or its apples are anything out of the ordinary. But this scraggly specimen produces the Arkansas Beauty, a so-called heritage fruit long believed to be extinct until amateur botanists in the Pacific Northwest tracked it down three years ago.

It's one of 13 long-lost apple varieties rediscovered by a pair of retirees in the remote canyons, windswept fields and hidden ravines of what was once the Oregon Territory.

E.J. Brandt and David Benscoter, who together form the nonprofit Lost Apple Project, log countless hours and hundreds of miles in trucks, on all-terrain vehicles and on foot to find orchards planted by settlers as they pushed west more than a century ago.

The two are racing against time to preserve a slice of homesteader history: The apple trees are old, and many are dying. Others are being ripped out for more wheat fields or housing developments for a growing population.

"To me, this area is a goldmine," said Brandt, who has found two lost varieties in the Idaho panhandle. "I don't want it lost in time. I want to give back to the people so that they can enjoy what our forefathers did."

RELATED: Washington's apple crop is one of the largest in history

Brandt and Benscoter scour old county fair records, newspaper clippings and nursery sales ledgers to figure out which varieties existed in the area. Then they hunt them down, matching written records with old property maps, land deeds and sometimes the memories of the pioneers' great-grandchildren. They also get leads from people who live near old orchards.

The task is huge. North America once had 17,000 named varieties of domesticated apples, but only about 4,000 remain. The Lost Apple Project believes settlers planted a few hundred varieties in their corner of the Pacific Northwest alone.

The Homestead Act of 1862 gave 160 acres (65 hectares) to families who would improve the land and pay a small fee, and these newcomers planted orchards with enough variety to get them through the long winter, with apples that ripened from early spring until the first frosts. Then, as now, trees planted for eating apples were not raised from seeds; cuttings taken from existing trees were grafted onto a generic root stock and raised to maturity. These cloned trees remove the genetic variation that often makes "wild" apples inedible — so-called "spitters."

1 / 21
AP Photo/Gillian Flaccus
In this Oct. 22, 2019, photo, E.J. Brandt and David Benscoter, amateur botanists with The Lost Apple Project, walk toward an orchard in the Steptoe Butte area near Colfax, Wash. Trees in the orchard are among hundreds currently being studied by the pair, who have rediscovered at least 13 long-lost apple varieties in homestead orchards, remote canyons and windswept fields in eastern Washington and northern Idaho that had previously been thought to be extinct.

Benscoter, who retired in 2006 after a career as an FBI agent and an IRS criminal investigator, pursues leads on lost apples with the same zeal he applied to his criminal cases.

In one instance, he found county fair records that listed winners for every apple variety growing in Whitman County, Washington, from 1900 to 1910 — an invaluable treasure map. In another, he located a descendant of a homesteader with a gigantic orchard by finding a family history she posted online.

Once he discovers a forgotten orchard, Benscoter spends hours mapping it. He has pages of diagrams with a tiny circle denoting each tree, with GPS coordinates alongside each dot. A lengthy computer database lists apples including the Shackleford, the Flushing Spitzenburg and the Dickinson— all varieties rediscovered by the project.

Apples from newly discovered trees are placed in a Ziploc baggie and carefully labeled with the tree's latitude and longitude and the date the fruit was collected. The apples are then shipped to the Temperate Orchard Conservancy more than 400 miles (640 kilometers) away in Molalla, Oregon, for identification.

There, experts work to identify them using a trove of U.S. Agriculture Department watercolors and old textbooks. Once a variety is identified as "lost," the apple detectives return to the field to take cuttings that can be grafted onto root stock and planted in the conservancy's vast orchard, to be preserved for future generations.

The trees could eventually boost genetic diversity among modern-day apple crops as climate change and disease take an increasing toll, said Joanie Cooper, a botanist at the Temperate Orchard Conservancy who's helped identify many of the lost varieties found in northern Idaho and eastern Washington.

She and two others founded the nonprofit conservancy in 2011, and operate it on a shoestring, after recognizing the need for a repository for rare fruit trees in the U.S. West.

"You have to have varieties that can last, that can grow, produce fruit, survive the heat and maybe survive the cold winter, depending on where you are," Cooper said. "I think that's critical."

RELATED: Inside WSU's creation of the Cosmic Crisp apple

For Benscoter and Brandt, however, the biggest joy comes in the hunt.

Brandt, a Vietnam veteran and passionate historian, last year found a homestead near Troy, Idaho, by matching names on receipts from a nursery ledger with old property maps. Three wind-bent apple trees neatly spaced along the edge of a wheat field were all that remained of the orchard.

Brandt collected the apples, hoping one was the Enormous Pippin, a lost variety he saw listed in the sales ledger.

Months later, he learned he had instead found the Regmalard, a yellowish apple with vibrant red splashes on its speckled skin. It hadn't even been on his radar.

"It's a lot of footwork and a lot of book work and a lot of computer work. You talk to a lot of people," Brandt said, savoring the memory. "And with that type of information, you can zero in a little bit — and then after that, you just cross your fingers and say, 'Maybe this will be a lost one.'"

Brandt is still looking for the Enormous Pippin.