Alaska Airlines employees follow special protocols and use custom equipment to care for fallen service members and their families. 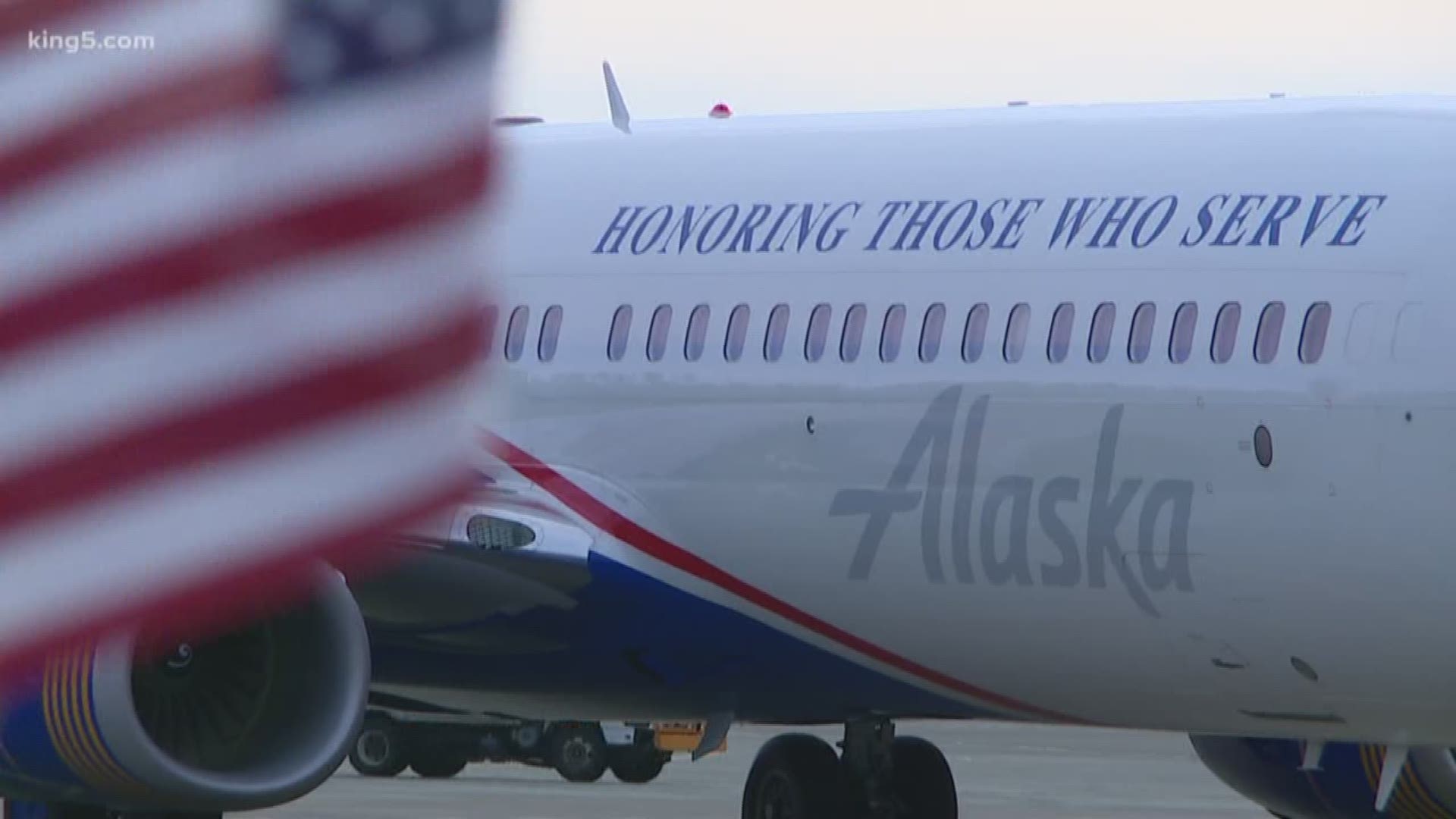 Veterans who give their lives for their country are entitled to a final salute from a military honor guard when they’re laid to rest.

But before they arrive at the cemetery, there is another group of caretakers made up of airline workers, who watch over fallen service members and their families as they take their last trip.

Airlines hurried to stay on-time during a busy morning at Sea-Tac Airport last Saturday. But at Gate C9, everything slowed down.

“With your permission, we’ll proceed,” an airline employee said to Susan Woods as she stood under an Alaska Airlines jet.

Woods nodded, and a ceremony began. She was there to send off her husband of 37 years, Sergeant Major James “Tony” Woods, an Army veteran who fought in Vietnam and retired in Olympia.

Sergeant Major Woods was a Silver Star recipient who died in April. He asked to be laid to rest at Arlington National Cemetery.

A Puget Sound Honor Flight happened to be heading to Washington, D.C. on Saturday, carrying dozens of vets to visit monuments and memorials.

With just a few days notice, Alaska Airlines activated a company-wide program designed to ensure military families like the Woods’ are treated with the utmost respect. As soon as the airline gets the call to transport a fallen service member’s remains, a brigade of employees and volunteers, many of them veterans, mobilizes to provide a final, dignified journey.

In 2011, he and other workers approached their managers with a concern: The company needed to show more respect when transporting military members who died.

“Unfortunately, all air carriers were handling the remains of fallen veterans like cargo. No longer is that the case with Alaska Airlines and other airlines,” Brosch said.

The bosses listened, and today the Alaska Airlines Fallen Soldier Program includes special protocols and equipment stationed in an expanding list of cities, like Phoenix.

During a recent ceremony there, Brosch and his team handed over a custom-made cart, bearing the seals of the different military branches, specifically for carrying flag-draped caskets.

Ten of the carts are on standby at airports across the country, and that’s the just one layer of the Fallen Soldier Program.

The airline just rolled out a second “Honoring Those Who Serve” jet, which it re-routes sometimes at a moment’s notice to carry veterans and their families.

“That’s a lot of work,” Brosch said. “They have to shift the schedule around. It’s no simple task, but they do it every single time, and if they don’t, it’s because it’s almost impossible to do.”

An airline escort always stays with the fallen service member while in their care. Baggage handlers and maintenance workers, trained on Defense Department protocol, become pallbearers.

“The level of respect and honor and kindness that was shown to our family, we have no words for it,” said Julia Schmidtke, an Alaska flight attendant from Tacoma.

Schmidtke understands how much the program means to families in a fog of grief. Her son, Army Specialist Hunter Schmidtke, 25, died last year, and her airline colleagues stood at attention at Sea-Tac to bring him home.

“It heals you,” Schmidtke said. “It heals you as you go through the hardest time you could ever imagine.”

Employees who participate in the Fallen Soldier Program do so on their own time, and they want to do more. They have a goal of building a fallen soldier cart for every airport Alaska Airlines serves. The equipment represents a rare part of the ultra-competitive industry where rivalry is set aside.

Although Alaska Airlines made the carts, any airline can use them. American Airlines also has a fleet of custom carts solely for fallen heroes.

Delta Air Lines has an Honor Guard made up of hundreds of employees who’ve escorted more than 5,000 servicemen and women around the world, the company said.

Back in Seattle, it’s the moment they’ve so carefully planned. Alaska Airlines employees gently guided Sergeant Major Woods’ casket onto a conveyor belt and into the belly of the 737.

She will join him at Arlington National Cemetery for a ceremony in June. For a few minutes, a corner of Sea-Tac stood still, and the honors came early.

“He got more than he asked for here,” Susan Woods said. “A lot more.”