Gateway Pet Memorial has been at the site for decades, and a number of animals are laid to rest there. A cell phone tower is being constructed at the cemetery. 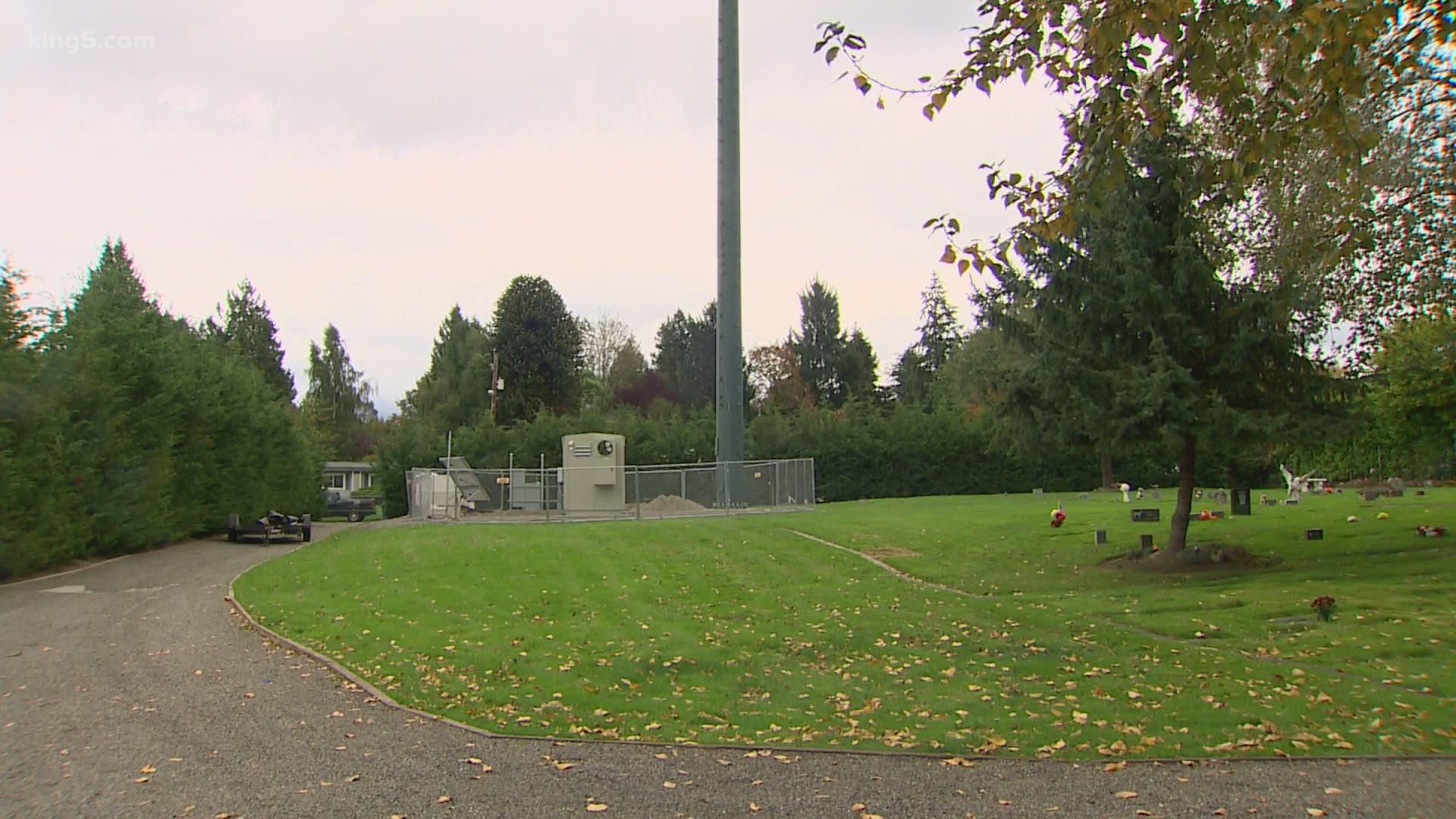 KENT, Wash. — Memories bring Julie Seitz back to the pet cemetery in Kent, and now, she’s fighting changes at the site she believes dishonor those buried there.

The site, now known as Gateway Pet Memorial, has been there for decades, and a number of animals are laid to rest there. Now, a cell phone tower is being constructed at the back edge of the graveyard.

“I cried,” she said. “I come out here every week. And I have to face this. And it’s my mission that it goes.”

Her pets were cremated and buried at the site.

“My biggest concern is that it’s on a burial ground,” she said. “That is unethical. This is sacred burial ground. This has no place here.”

She is concerned for the pets, but also the people, too. She’s identified at least one human buried here – a marker for a Mrs. Marilyn Auer is placed near the road, near a marker saying: “She loved her pets.”

A Seattle Times article from 2009 reports at least 20 people were cremated and buried here, to be with their pets.

But the project is moving forward as planned. The company building it, Crown Castle, said it was legally permitted, and that no graves were desecrated with its construction.

However, Jim Chan, director of permitting for King County, said the office was not initially aware of the apparent presence of human remains on the site.

Chan said the Department of Permitting and Environmental Review subsequently had their attorneys look into the issue, and found a small but important distinction in the law – the way a person was laid to rest.

All evidence so far indicates any people on the site were cremated, Chan said, which does not reclassify the site as a human cemetery, which would have more “more stringent requirements.”

“It doesn’t automatically give the protections of a cemetery,” Chan said. “It does not.”

However, he said if non-cremated remains were to be discovered, that could change the situation. There is no evidence of wrongdoing in the permit application, Chan said.

He added that the department will be sending surveyors to check out Seitz's claim that the tower was built in the wrong spot.

Seitz is undeterred. She’s obtained letters from King County that the site qualifies for county landmark status, and the state Dept. of Archeology & Historic Preservation indicating the site could be eligible for the Washington Heritage Register, and potentially the National Register of Historic Places.

Both letters indicate some notable animals buried there: "Little Tyke," a 'well-known lioness' from the TV show "You Asked For It," and a baby goat that was "mascot for the 1960 presidential campaign of Lucy Mayberry."

“My hope and goal, and I’ll work until it's done, is that this cell phone tower is stopped, and the cell phone tower completely removed and the damage and disrespect remedied if it even can be," she said.