Two groups, 350 Seattle and Mazask Talks, argue that Chase Bank is one of the largest funders of tar sands, which they say are some of the most climate destroying fossil fuels out there. 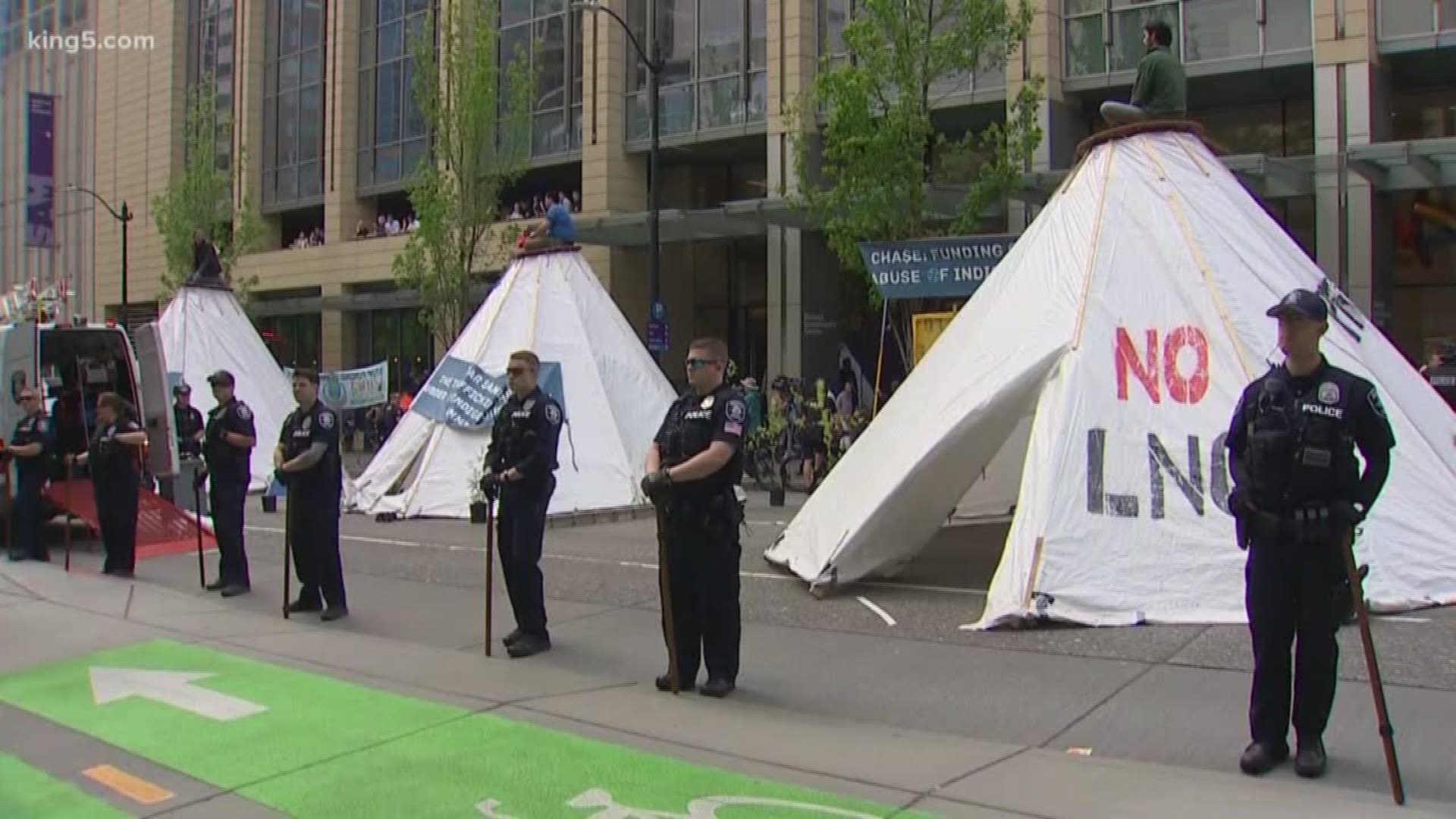 Fourteen people were arrested Monday for refusing to stop blocking downtown Seattle streets as part of a nationwide protest against Chase banks.

Two groups, 350 Seattle and Mazaska Talks, argue that Chase Bank is one of the largest funders of tar sands, which they say are some of the most climate-destroying fossil fuels in use. 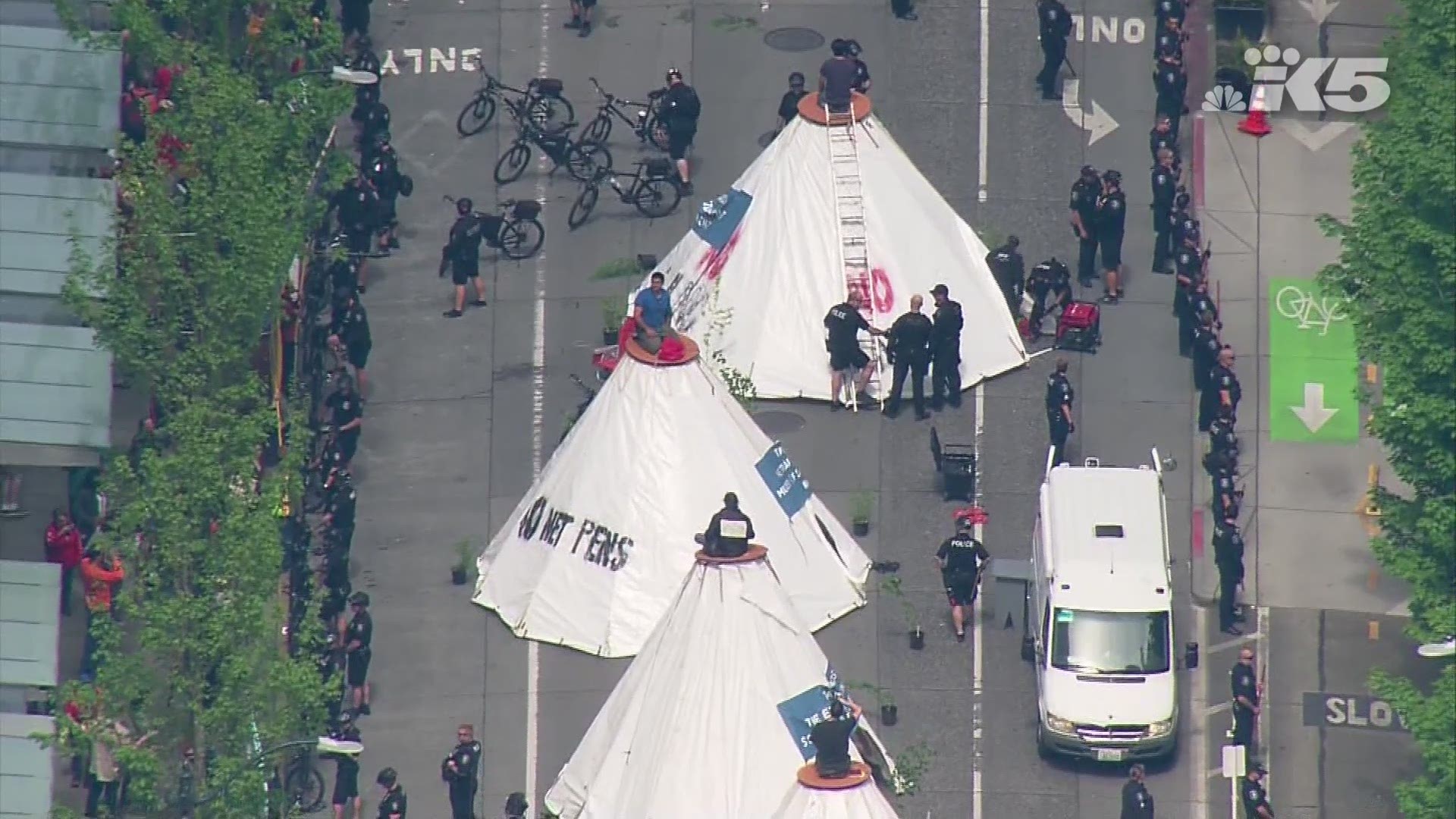 Demonstrators blocked all lanes of Second Avenue at Pike Street with teepees shortly before 10:30 a.m. causing traffic backups and busses to be rerouted.

By 3:30 p.m., police had cleared the teepees and began reopening Second Avenue.

A message from atop one of the “tarpees” blocking 2nd Ave in downtown Seattle right now. Here is Aaron Brouillette, who has been sitting 14 feet up since 10A. pic.twitter.com/SpgVh9wY4n

Protestor eats banana while @SeattlePD officer on @SeattleFire ladder tries to talk him off tarpee in middle of 2nd Ave. pic.twitter.com/PfV6w0B5n7

Last week, a banner showed up on an abandoned building on Aurora Avenue North near Dexter Avenue. The banner, which neither group would claim responsibility for, prompted people to stop banking with Chase.

The banner reads, “Do you bank with Chase? STOP funding climate change.”

Alec Connon, of 350 Seattle, said his group spoke with representatives of Chase back in late 2017 and had a “good” meeting with them. However, in recent months he said they have been unable to get Chase to meet with them again to address new concerns. 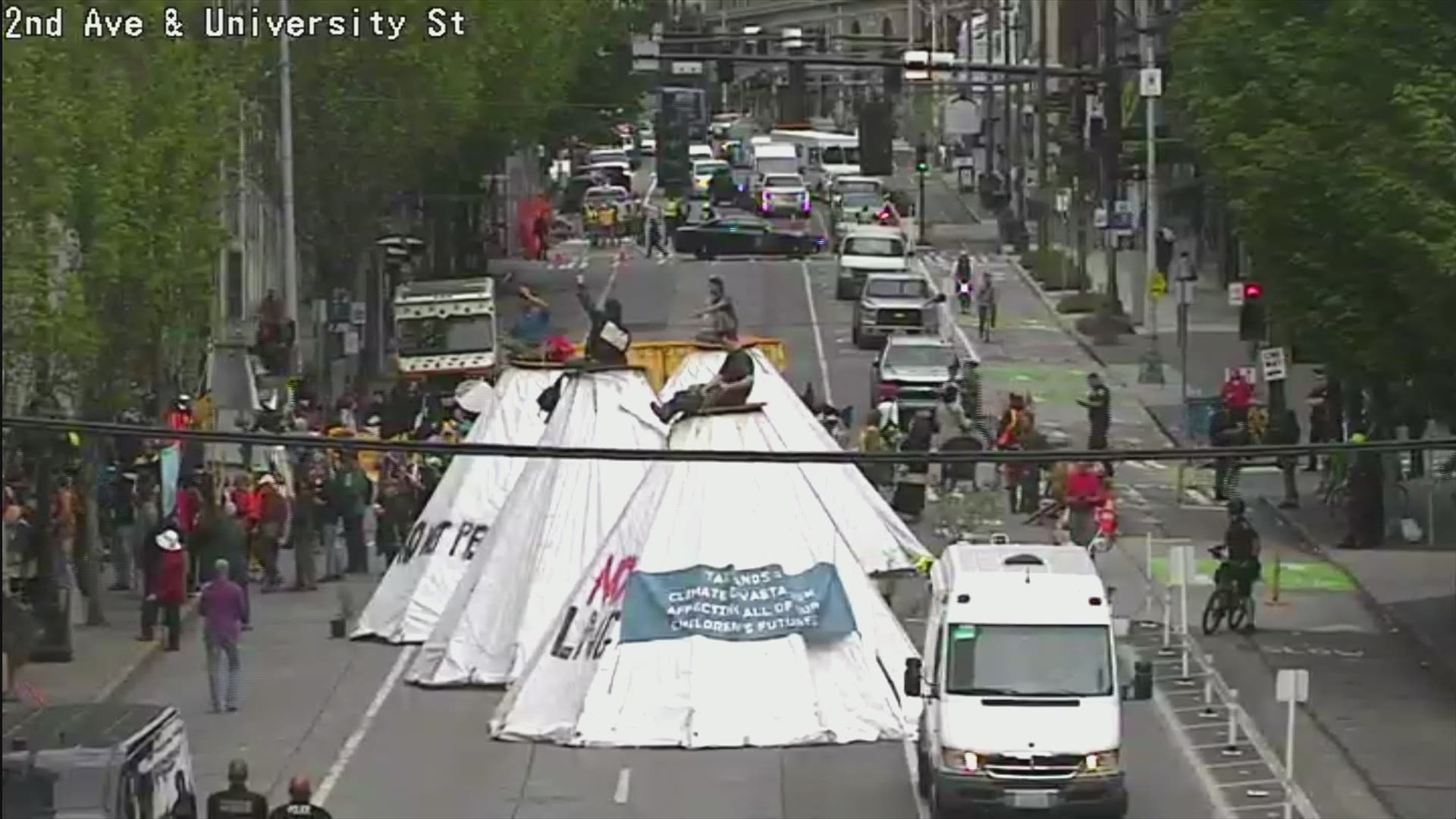 Connon says some of those concerns are that the group believes Chase increased their funding for tar sands, and have also ignored the rights of indigenous people. The group said Chase is violating their policies by doing this and want them to stop.

Sarah Oaks, also of 350 Seattle, said they plan to go to the banks and talk with them and to let them know they are not going anywhere.

“They have a moral obligation to stop using tar sands as well as follow their own policy,” Oaks said.

Rachel Heaton, of Mazaska Talks, said Chase’s involvement is not just a Seattle issue, but a nationwide and even global issue.

“I think this is just one more way to get that message out and show that this kind of action towards these Wall Street banks isn’t going to stop,” Heaton said when asked about the banner on Aurora Avenue.

In a statement provided to KING 5, Andrew Gray from JP Morgan Chase said they take these types of issues very seriously.

“JPMorgan Chase has a long history of advancing environmental sustainable solutions for clients and its own operations. We firmly believe that balancing environmental and social issues with financial considerations is fundamental to sound risk management. We take these issues seriously across our business, including with the Canadian oil sands."

Gray mentioned Chase was aware of the banner on Aurora Avenue as well as the planned protests. Gray said as long as they do not break the law, they will not prevent them from exercising their right to protest.

Gray also said Chase is not opposed to possibly meeting again with the groups, but at this point, there has not been a suitable time to coordinate another meeting.