Jeffrey Smith served three tours in Afghanistan, but he recently found himself fighting to leave the Army with honor, benefits and help. 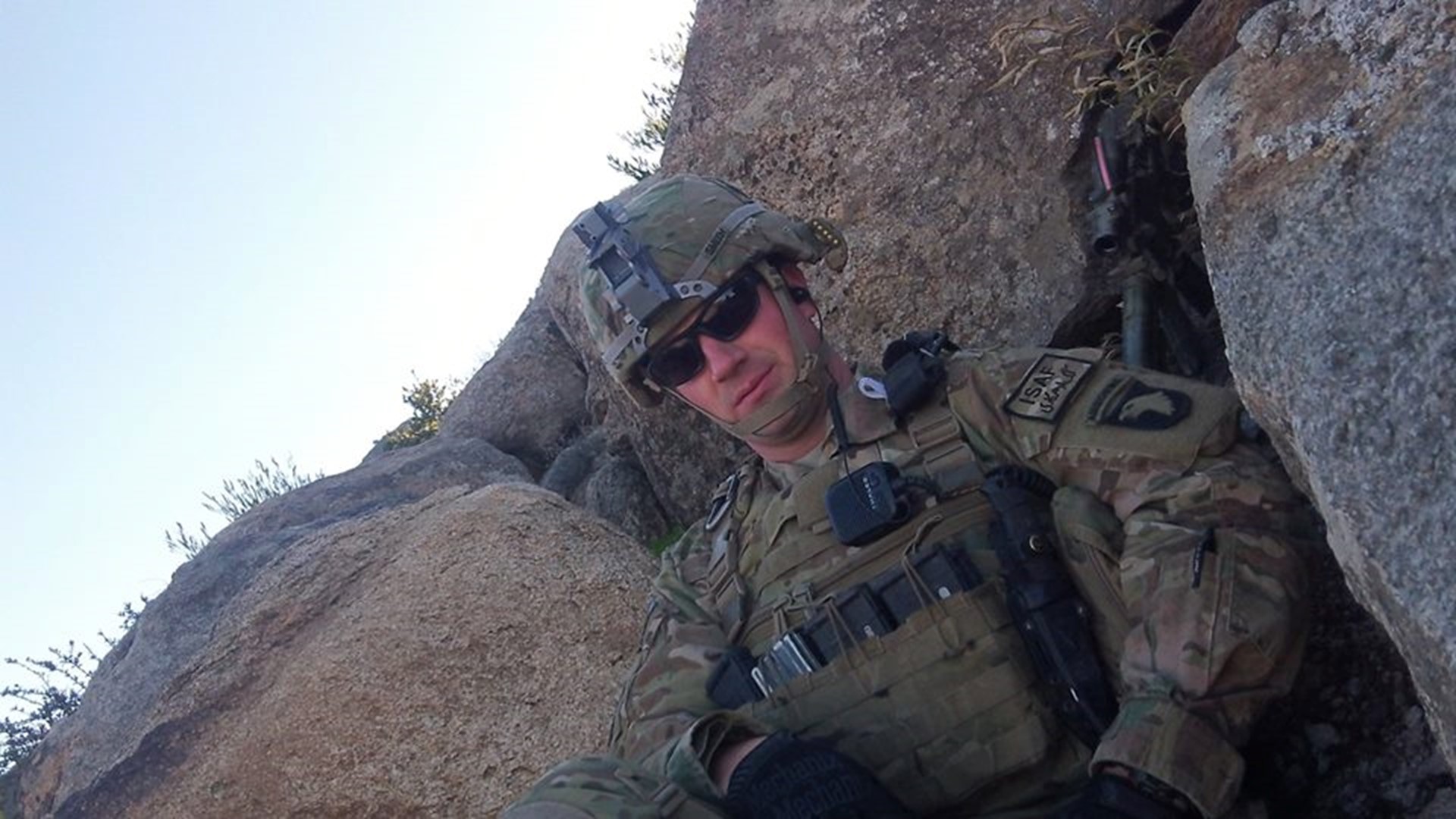 LACEY, Wash. — Jeffrey Smith served three tours in Afghanistan, but earlier this year, he found himself fighting a new battle: a fight to leave the Army with honor and veterans benefits, like long-term medical help.

“I don’t know how to function normally," the former infantryman said. “ I don’t know what I’m going to do.”

After a 10-year career in the service, Smith, 33, was on track to get out of the military with a medical discharge. He has combat-related post-traumatic stress disorder, and Army doctors found his trauma was too debilitating for him to stay in the military.

“I’m more comfortable being in Afghanistan than I am sitting in this living room right now,” Smith said during an April interview at his Lacey home. “I’d rather be getting shot at and blown up and stuff than be sitting here.”

Smith got in trouble for a series of alcohol-related incidents last year that ultimately derailed his medical discharge process and his ability to qualify for help outside of the service, including VA health care. He showed up to work drunk on two occasions and later got a DUI.

At issue is whether the Army made the right call when they kicked him out of the military under other-than-honorable conditions instead of for medical reasons. There's evidence that Smith's PTSD led to his alcohol abuse, his medical records show.

A spokesman at Joint Base Lewis-McChord, where Smith was stationed, said the leaders there followed protocol, considered medical opinions and treated Smith to a fair separation process.

Experts, like Dr. Robert Stanulis, say Smith’s case is further proof of a continuing pattern, where soldiers with service-related behavioral health issues are wrongfully punished for behaviors those same conditions cause.

“Substance abuse is as much a part of PTSD as pain is a part of cancer,” said Stanulis, a Portland-based neuropsychologist who specializes in treating veterans with combat trauma.”If you look at what’s being called misconduct, it’s really just a measure of the severity of (Smith’s) symptoms.”

Whistleblowers at JBLM’s Madigan Army Medical Center came forward that same month.They revealed the Army has a pattern of punishing soldiers who need help, and they said commanders frequently disregard the advice of military doctors when making decisions about a service member’s fate.

“There is widespread frustration (within Madigan) right now because the perception is our recommendations seem to be ignored,” said one Madigan psychologist, who doesn’t have permission to talk to the media. "Some soldiers with proven medical dysfunctions are being kicked to the curb and dehumanized ... (They’re) the victims of an injustice by a system that’s really way bigger than they are.”

Between January 2009 and October 2015, the Army separated more than 22,000 soldiers for misconduct after they came back from Iraq or Afghanistan and were diagnosed with a mental health condition or a traumatic brain injury, according to Department of Defense data obtained in 2016. As a result, many of the dismissed soldiers did not receive health care benefits that soldiers are eligible to receive with an honorable discharge.

Army officials said in response to a 2018 Freedom of Information Act request that they are not continuing to track the information they previously provided. Therefore, it's unclear exactly how many soldiers with service-related behavioral health conditions are still being separated for misconduct.

Both local and national Army officials have declined repeated interview requests to talk about this topic.

A quiet descent into despair

Before they labeled him as a bad soldier, Army leaders once considered Smith one of “the best.”

Not only is he decorated with honors, like Army Achievement and Good Conduct medals, but Smith consistently exceeded Army standards, according to a review of his military records.

In one work evaluation from 2017, Smith’s supervisor commented that he was a “resourceful, adapted and reliable” leader who could be “relied on for any complex task.”

But at the same time he was flourishing at work, Smith says he was privately struggling.

“I would be at work and have an anxiety attack or a panic attack and go get what I’ve always gotten – go get alcohol,” he said. “Then, as soon as I got home, I would drink a bottle (of liquor), drink two bottles (of liquor).”

When he returned from Afghanistan for the first time in 2010, he says he started drinking alcohol – not just in social situations – but to simply function.

Within months after returning from that tour, in 2011, Smith got his first DUI as a soldier. The Army sent him to substance treatment – their first of several attempts to help Smith. But it didn’t work.

“It's when you get home that your brain starts processing everything that you went through,” he said. “We were trying to process that by ourselves, and I mean alcohol was the only way we could do it. It wasn’t talking to somebody about it.”

Smith said, in Afghanistan, he listened over the radio to his friend, Sgt. Tyler Beechnaw, die in a firefight. He says he struggled with survivor's guilt after that day. Smith didn’t understand why Beechnaw died while he survived three separate IED blasts and dozens of firefights.

“I thought for sure I was dead,” Smith said. “You see trees around you exploding. I told myself over and over in my mind, ‘Just keep squeezing the trigger until you get shot.’”

One of his most haunting memories, he says, is from the day he had to walk through an Afghanistan village after the U.S. military hit it with mortars.

“Walking through there and seeing kids burnt up or you see toys and stuff on the ground and schools and women burnt up. It never leaves you,” Smith said. “Stuff you’ve done in war that you know resulted in the deaths of small children and stuff like that, it makes it so much worse.”

Jimmy Anderson, a veteran who served with Smith on that deployment, said Smith transformed after seeing the devastation in that village.

“He drank a lot – and I mean a lot – after that (trauma)," Anderson said. “He just seemed a lot angrier. Way angrier over the years.”

Last year, Smith’s unresolved pain came to a head, and his substance abuse publicly escalated. That’s when he started showing up to work late and drunk. Army leaders wrote him up for breaking the rules.

“Your performance over the past few months has become unsatisfactory,” wrote his platoon sergeant, Joseph Keinenburg, in one discipline record. “You are becoming a burden not only in this Platoon but the Company as well.”

In the wake of that misconduct, the Army again sent him to get help. They also began his medical evaluation board – the process that put him on a track to get out of the military with a medical discharge.

While in substance abuse treatment in July 2018, a mental health professional who diagnosed Smith’s PTSD determined the soldier was using alcohol to “avoid his trauma.”  A VA-contracted psychiatrist who examined him in February 2019 –  two months before he got kicked out – came to the same conclusion, according to a review of Smith’s medical records. She determined he was using alcohol to “relieve the symptoms of his PTSD.”

Smith’s medical discharge process came to a halt this year in the wake of his second DUI charge as a soldier – an arrest in Thurston County in December 2018. That’s when Smith’s captain recommended to superiors that the Army instead kick him out of the military with an other-than-honorable discharge for breaking the rules.

When a commander decides to separate a soldier for involuntary reasons, there’s a complex process that follows.

The Army holds “administrative separation hearings” for certain soldiers who are facing a misconduct-related discharge. Those soldiers, represented by civilian or Army legal counsel, have the opportunity to go before a board and plead their case for a better discharge status. After the board makes a recommendation, it’s up to a high-ranking general at the base to decide what happens next to the soldier.

But before that process begins, soldiers must go through a medical evaluation screening. It’s meant to determine whether there are special behavioral health factors officials should consider before separating a servicemember from the military.

While those two mental health providers who previously examined Smith both noted a connection between his PTSD and his alcohol abuse, a psychologist who conducted his separation screening didn’t agree, according to the evaluation.

The psychologist acknowledged that Smith was unfit to stay in the military due to his PTSD but she said he can “still appreciate the difference between right and wrong,” and that he could “intelligently engage” in an administrative separation hearing. So the hearing went forward, and the other-than-honorable recommendation eventually made it up to Maj. General Willard Burleson’s desk at JBLM.

In the end, the high-ranking general – not a doctor – would decide if Smith deserved lifelong VA benefits and help or nothing at all. Smith walked away empty handed.

“I should have picked a different career,” Smith said.

In a statement, an Army spokesman at JBLM said the separation board complied with Army rules and procedures when they evaluated the evidence and made recommendations in Smith’s case.

“The separation authority considers all of the board’s recommendations along with medical providers input prior to making a final decision on a soldier’s separation,” wrote Lt. Col. Roger Cabiness II, the spokesman for the Army’s 7th Infantry Division.

He did not respond to KING 5's question about whether Burleson consulted with medical experts before reaching a decision in Smith's specific case.

Smith and his family moved away from Washington state in May. Because the veteran doesn't immediately qualify for long-term VA medical care, he said he's now asking the agency to make an exception. The VA has its own process to determine whether veterans dismissed under other-than-honorable conditions can qualify for medical care. The process can take months and sometimes more than a year.

“I’m going to have these issues for the foreseeable future, and it’s just completely irresponsible, I think, to send a soldier out into the civilian world after he’s experienced the things that a lot of us have – and having a diagnosis of something that I didn’t have before I joined the Army.”