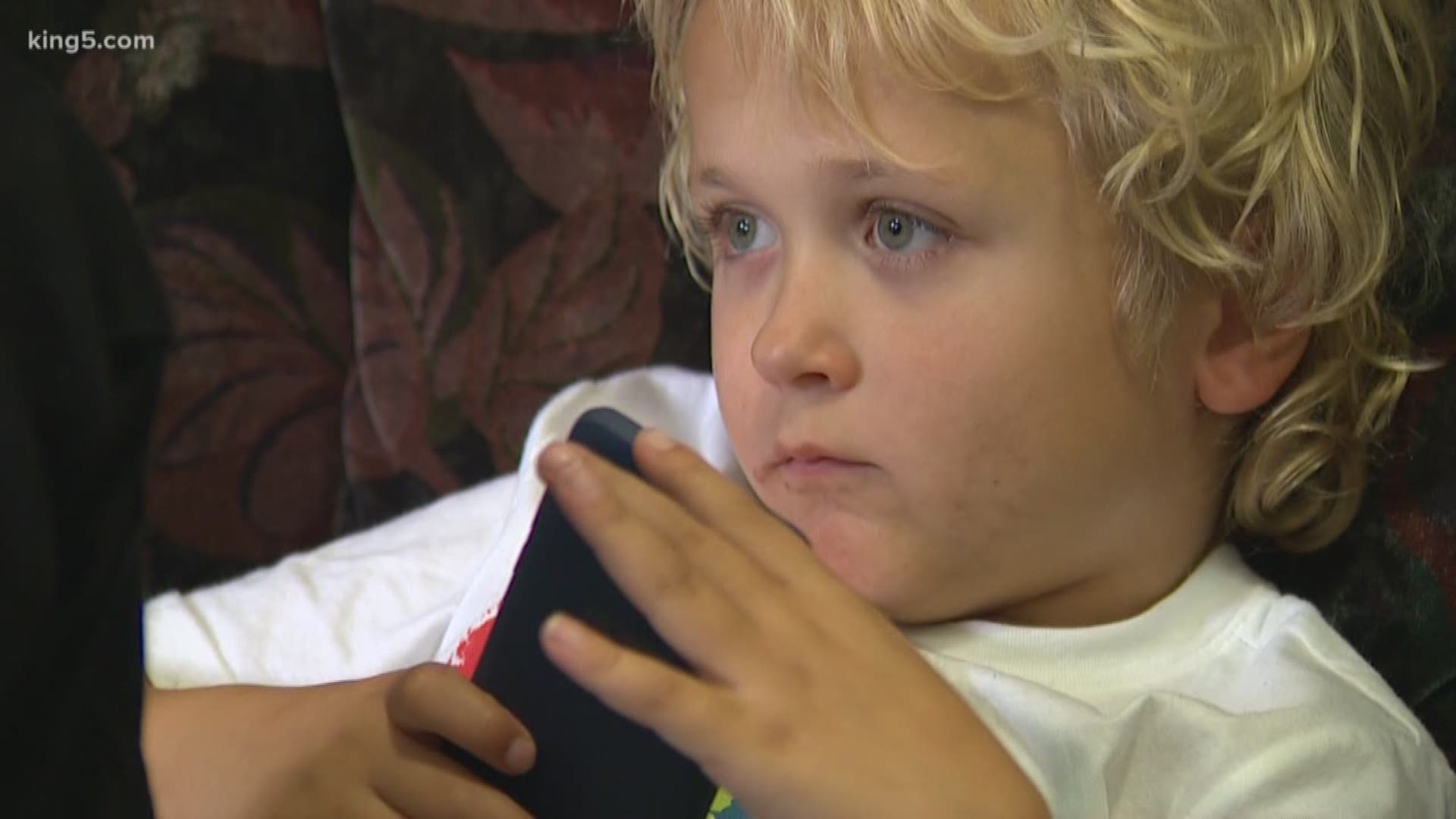 Lisa Kolbert said she feels relief when she drops her 7-year-old son, Joseph Orekhov, off at his new school.

Joseph, a deaf second grade student with high-functioning autism, is now eager to hop out of the car each morning, put on his backpack and rush toward the school entrance. At the door, he signs “good morning” to the greeter outside Salish Sea Deaf School in Burlington.

But just two months ago, Kolbert said, a glimpse of a school bus or the sight of a classroom would lead her son to panic.

“I would have to drag him (to school). Half of the town saw me every day.  He would kick and scream and scratch me,” Kolbert said. “He didn’t want to go there.”

At first, Kolbert said, she couldn’t figure out the reason why he resisted going to the school. She said Joseph’s teachers assured her he was flourishing in the classroom.

But in September, Kolbert received a phone call from a whistleblower who made an accusation that ultimately led her to pull Joseph and his brother, David, out of the public school. Kolbert then hired a lawyer and pursued legal action against the district.

Linda Baker, an occupational therapist with two decades of experience, came forward to tell Kolbert that educators at Sumas Elementary School had restrained her son.

“I couldn’t even believe schools could do such a thing,” Kolbert said. “I trusted them.”

Baker said Joseph was strapped to a chair, with a thick white belt fastened around his waist, for hours at a time.

“I believed the use of restraint was unlawful, highly excessive and utterly shocking,” Baker, the occupational therapist, wrote in a notarized declaration filed in King County Superior Court. “I have never seen another child restrained in this manner.”

Under a 2015 state law, educators aren’t allowed to restrain or isolate students unless there’s an “imminent likelihood of serious harm.” Before the law passed, Washington educators had more latitude with using restraint and isolation. For example, they were able to isolate or restrain students as a punishment to control or dissuade unwanted behavior, such as damage to school property.

Years of research show the controversial practice of isolating and restraining students is not only outdated, it doesn't work. The U.S. Department of Education warned states in 2009 — and again in 2012 — that "restraint and isolation should be avoided to the greatest extent possible," and used only as a last resort in safety emergencies. The agency stated there's no evidence these behavior modification tactics are effective in stopping the problem behaviors in the first place.

Despite those recommendations and the state law that sought to limit how often Washington educators physically restrain and isolate students, a KING 5 review of statewide data revealed teachers continue to rely on the practices in many Washington's public schools. There were thousands of more cases reported last school year.

“We still have some educators in our state who don’t understand the restraint law and don’t understand how emotionally and physically harmful an unauthorized restraint can be,” said Kathy George, a Seattle-based special education advocate and attorney.

'He Was Experiencing Some Trauma'

Prior to Baker's phone call, Kolbert said she was aware that her son sometimes wore a thick white belt while at school. The mother said teachers told her they wanted Joseph to wear the belt so they could use it to help pick him up in case he tripped and fell.

Credit: Lisa Kolbert (Provided)
Joseph Orekhov wears a belt around his waist while sitting outside. The belt is the same one an occupational therapist said she saw Sumas Elementary School educators use to strap the 7-year-old child to a school chair.

But in that signed declaration, under penalty of perjury, Baker, the occupational therapist, reported that school district staff used the belt to tie Joseph down because they feared he would run away.

She wrote that the belt, approximately five-inches wide, was “attached to another substantial strap tied to a chair,” and that Joseph was “unable to move or stand freely while restrained.”

Baker worked for the Nooksack Valley School District for about six months under a temporary contract that began in January 2019. Her job was to provide occupational therapy services to multiple special education students in Sumas Elementary School’s self-contained classroom about three times a month.

Baker said she discovered the situation for the first time in February 2019, when she came to perform an occupational therapy evaluation on Joseph. She said Joseph appeared to be "enraged" by being strapped down.

Baker said she believes the experience caused Joseph to experience trauma. Medical experts have testified that the practices of restraining and isolating students can have a lasting physical and psychological impact on some students. It's why they say educators should use positive behavior supports to address the root of the child's problem instead of using restraint and isolation as a tool.

In “Back of the Class,” a multi-part investigation into Washington special education failures, KING 5 found multiple examples in districts across the state where other students with disabilities experienced psychological and educational setbacks after they were repeatedly restrained or isolated in schools.

Braedon Hafey, a 7-year-old Tumwater student with autism, began to injure himself at school after teachers locked him in a closet-sized room dozens of times to control his behavior.

River Willison, an 11-year-old student with autism, refused to attend school full time for about three years because the use of isolation and restraint in the Bellingham School District psychologically traumatized him, according to his medical records.

Isaac, a 13-year-old student with autism, refused to enter any school building for two years because he was traumatized from his experience in the Seattle School District. School records show educators at B.F. Day Elementary School restrained Isaac repeatedly in 2014 to control his behavior.

1 / 3
Taylor Mirfendereski | KING 5
Braedon Hafey, a 7-year-old with autism, climbs a tree at his farm in Olympia, Washington.

In Joseph’s case, his mother said he began to act out at home around the time period that Baker reported seeing him strapped down during his first grade year. On top of that, his academic records show he wasn’t reaching his goals. He made “poor progress” in nearly every area.

“I wish they would have told me right away—at least once—that he’s having troubles there.” Kolbert said. “I would have taken him out.”

Last February, Baker sent an e-mail to four Sumas Elementary School staff members, including administrators. She reported that Joseph’s special education situation is “very concerning.” She informed the staff that Joseph is “in chair restraints,” which is “against the law,” and the situation “appears dire.”

“This is clearly not acceptable. He is 6 years old and needs a lot of movement to be happy and regulated,” Baker wrote. “This situation could cause permanent trauma and damage to his nervous system to say the least.”

In June, she wrote another e-mail expressing her concern. In that note, she suggested that Sumas Elementary School staff receive updated training on the use of restraints and isolation in schools. She also contacted the Office of Superintendent of Public Instruction (OSPI) in Olympia and Child Protective Services.

But instead of change, Baker said the special education teacher dealt with her complaints in a different way.

“She banned me from the classroom,” she said.

Baker’s temporary contract with the district ended in June.

After the occupational therapist reported to Kolbert that Joseph was restrained, the mother filed a citizen complaint with OSPI in mid-September.

The state agency promptly opened an investigation, which concluded in November.  According to legal documents, the OSPI investigator got a completely different story from the Nooksack Valley School District.

School officials said the belt Joseph wore was not used as a restraint. In fact, they reported that Joseph liked to put it on. They said it was his seating preference to sit in the chair and fasten the front buckle of the strap. They also said he could unbuckle and leave the chair at any time.

More than a dozen staff members who were interviewed by the OSPI investigator said they never saw Joseph strapped to a chair in the manner Baker described. One para educator reported witnessing staff occasionally hold Joseph by the belt as the student walked in the hallway.

District officials admitted that there was never an imminent likelihood of serious harm, as the law requires in cases of restraint.

Hruska said the occupational therapist has no motivation to lie.

“This will only bring attention and scrutiny on her, and I think she’s hugely brave to continue to speak out,” Hruska said.

Officials at the Nooksack Valley School District declined a request for an interview to discuss Baker’s allegations.

Cindy Stockwell, assistant superintendent at the Nooksack Valley School District, wrote in a statement that the district works continually to ensure that the Individuals with Disabilities Education Act and "all related special education guidelines and procedures are implemented with fidelity.”

“We are highly confident in our staff and the services and supports they provide for our students,” Stockwell wrote.

In the end, OSPI’s investigator wrote that Baker’s allegations “appear credible.” But he couldn’t determine if Joseph had been restrained in a chair or not.

OSPI ordered Nooksack Valley School District officials to receive training on both the proper use of restraint and isolation and the state’s reporting requirements.

Kolbert said she continues to believe that Baker’s story about her son is true.

She said she hopes Joseph will keep thriving in his new environment at the private school.

“I’m hoping that he’ll learn to trust human beings again and learn not everyone is like that and (that) what happened to him is wrong,” she said.