Renton-based Office Careers plans to appeal an L&I decision to terminate all business with the school. 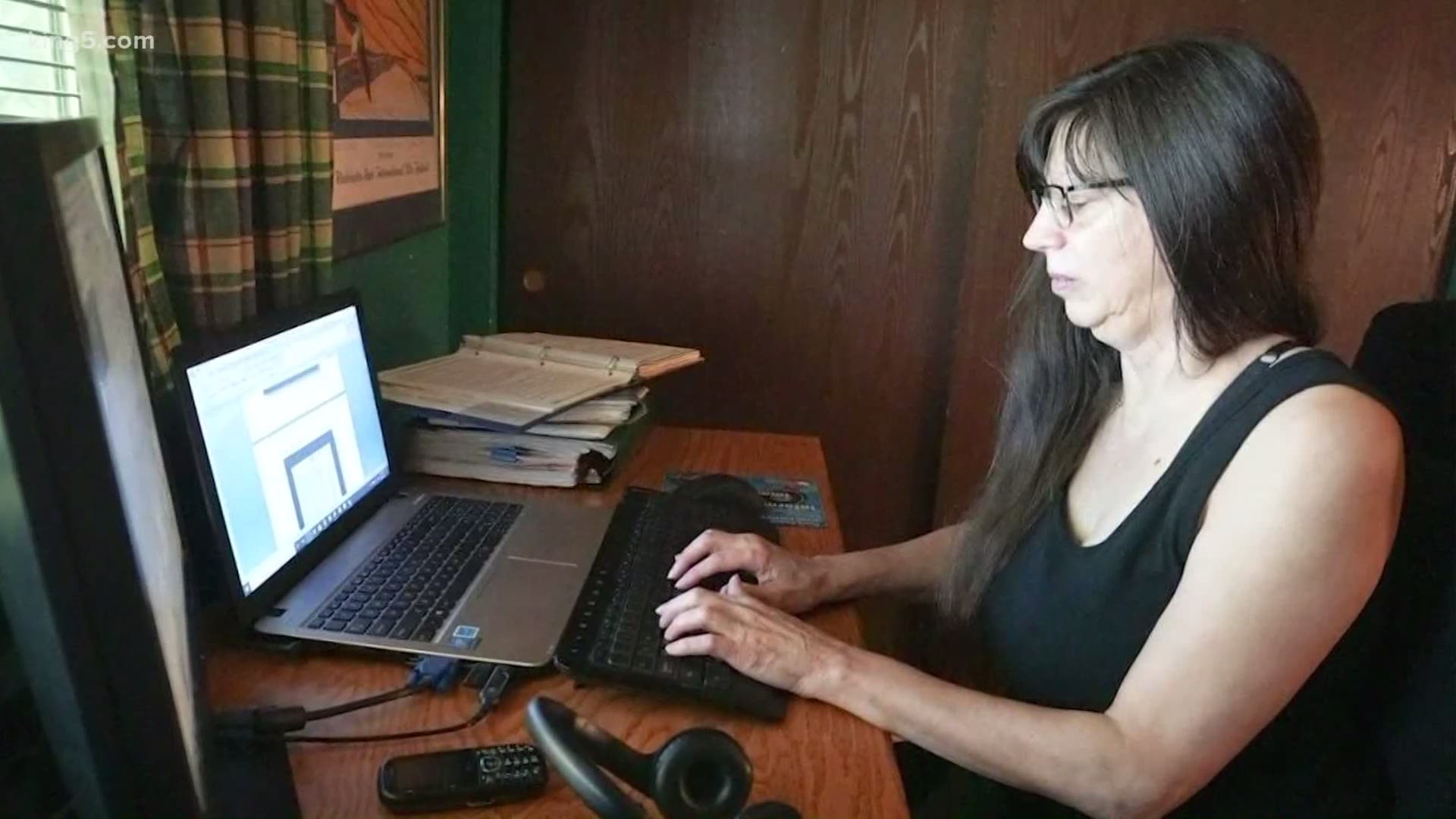 SEATTLE — A Washington State Department of Labor and Industries (L&I) year-long audit of a Renton-based online school has led to the state's first-ever official order to suspend business with a school dedicated to retraining injured workers.

The move comes after a multi-month investigation by the KING 5 Investigators revealed the private school, Office Careers, routinely awarded certificates of completion to students no matter what their progress. KING 5’s investigation uncovered that many injured workers, with their tuition paid by L&I, graduated with a certificate but not with the skills needed to obtain a job in the area of training. Upon program completion, the state often found the workers “employable” and cut off their benefits.

“I’m happy. I’m so glad that nobody else has to go through and waste the time that I wasted doing the schooling,” said Annette Gerstenbauer of Bonney Lake, who got a certificate from the school in 2016. Gerstenbauer said she then applied for between 100 and 120 jobs. She got two interviews but no job. Her benefits were cut off.

“I got nothing out of it. I got a certificate that wasn’t worth what it was written on," Gerstenbauer said. “It makes me feel worthless. You know, you feel really worthless.”

The L&I audit report, issued May 26, listed the following conclusions:

“We believe this is very serious,” said Rich Wilson, the L&I manager who oversees the department’s retraining programs. “We put workers into training so that they can get a job. It’s extremely unfortunate (that wasn’t happening).”

Office Careers has the right to appeal the state’s decision and the school’s attorney, David Smith, said they plan to do so. Smith said the audit findings are without merit and that his client hasn’t violated any laws or requirements.

“Office Careers intends to appeal the (L&I).....Order and Notice and preliminary Audit Report because they are based on an outdated understanding of our client’s distance learning training programs,” Smith wrote in a letter to KING 5 on June 24. “In contrast to the (state findings) our client has and continues to maintain records sufficient to establish it meets the criteria set for 'training providers'…and has already corrected any clerical errors that may have resulted in over-payment tuition fees by L&I.”

Smith denied anyone received a certificate without completing the course. He also said the KING 5 stories led to positive changes at the school, including plans to diversify its student population by accepting fewer students without high school diplomas or GEDs.

“We should not have accepted everyone who was referred to us by the (state-paid) vocational counselors. It led to the situation that caused the (KING 5) stories to be written,” Smith said.

Smith added that Office Careers is to be recognized for helping many students prepare for and successfully take the GED exam.

The unprecedented move by the state was welcomed by attorneys who represent injured workers and complained about the school going back 12 years.

“I am so happy for all of the future workers who won’t be subjected to go to this facility for retraining,” said Seattle-based attorney Katherine Mason who was the first to officially complain about the school back in 2008. “It’s overdue. It took too long.”

The state’s order prohibits L&I from approving any more retraining plans at Office Careers and demands the school remit tuition over-payments of $25,434.50 plus interest, which brings the total to $36,302.

The state is also launching an additional audit of the school that focuses on billing practices.

The changes come after L&I funded the school for more than a decade. In the last five years the state paid Office Careers approximately $1 million a year, state records show. More workers attended Office Careers than any other school in the state.

Wilson of L&I said in hindsight the state waited too long to act.

“It’s been a lesson. And I can tell you that to that end…We’re going to take the lessons we learned from this audit and we’re going to make sure this kind of thing never happens again,” Wilson said.

Wilson said L&I is developing a new unit dedicated to ensuring quality at the retraining schools they pay to retrain workers. They plan to hire at least one additional full-time employee to help carry out the duties.

Wilson also said that for the first time L&I will follow a 10-year-old law that requires the state to only use schools that can prove at least 50% of graduates land a job in their field of study after course completion.

“We learned a lesson there too. That rule has been in place, and we haven’t applied it until now,” Wilson said. “Going forward it will be a better system.”

Smith, the Office Careers attorney, said the state is unfairly punishing the school for not meeting requirements that were not in place at the time. For example, the state never mandated the school submit evidence that graduates obtain employment after attending the school.

“The audit has a whole set of problems,” Smith said. “The appeal will show that some of the findings aren’t based on interviews of witnesses or a review of contemporaneous notes from instructors. I’m not sure what the audit is based on.”

Over several months time, KING 5 interviewed 51 current and former Office Careers students. Many had similar stories: Teachers moved students along to new subject matter whether students understood material or not. No tests were given. Dozens said the school skipped over sections of the curriculum.

Gerstenbauer, the Bonney Lake resident who injured her neck during two decades of warehouse work, said she got a certificate of completion without even being presented with some of the subject matter outlined in the school’s course curriculum.

According to detailed curriculum information on the Office Careers website, Gerstenbauer’s 18-month transportation clerk program features how to handle phone calls and “hands on” telephone practice during weeks 32, 33, 55, 56, 57, 58, 59 and 60.

Gerstenbauer said she received no training on entering data from phone calls.

In weeks 36 and 37, “selling” was to be covered. Gerstenbauer said she never received any sales or selling instruction.

“I think they just found a place to funnel everybody into, just to get us off the books. Not to truly get you retrained well, but just to be done with you,” Gerstenbauer said. “My benefits were cut off the exact day my classes were complete. Now I live on $495 a month (from Social Security Disability).”

Of the students KING 5 interviewed, Dax Brown was the only person who reported finding employment after graduating from Office Careers. He works at Michael’s Messenger Service in Vancouver, Wash.

“(It was) unbelievable. Prior going to Office Careers I was only able to type 10 words a minute. I got computer knowledge and software knowledge that I didn’t know anything about prior to going to the school,” Brown said. “If you’re not doing what’s required of you and not asking the proper questions to your teacher, you’re not going to benefit from any type of school that you’ve gone to. They gave out the curriculum and took the time to teach you the information online.”

Attorney David Smith criticized KING 5 for interviewing only “disgruntled workers” and said most students have positive experiences but few were willing to come forward for the reports. Smith provided signed declarations from two students who enjoyed their experience.

“I would like to give Office Careers and its instructors a huge thank you for everything they have taught me!! I hope the KING 5 stories do not ruin a program that has helped me tremendously,” wrote Bobbie Wilson.

“…the stories published by KING 5 are in no way representative of the experiences of most Office Careers students,” Smith said.

The state agency that licenses vocational schools, the state's Workforce Training Board initiated an investigation into Office Careers after the first KING 5 story aired. That investigation continues.

Office Careers has until the end of July to appeal the L&I order.