The Washington State Attorney General's office has settled a lawsuit that will help veterans who were at the center of a KING 5 Investigation. 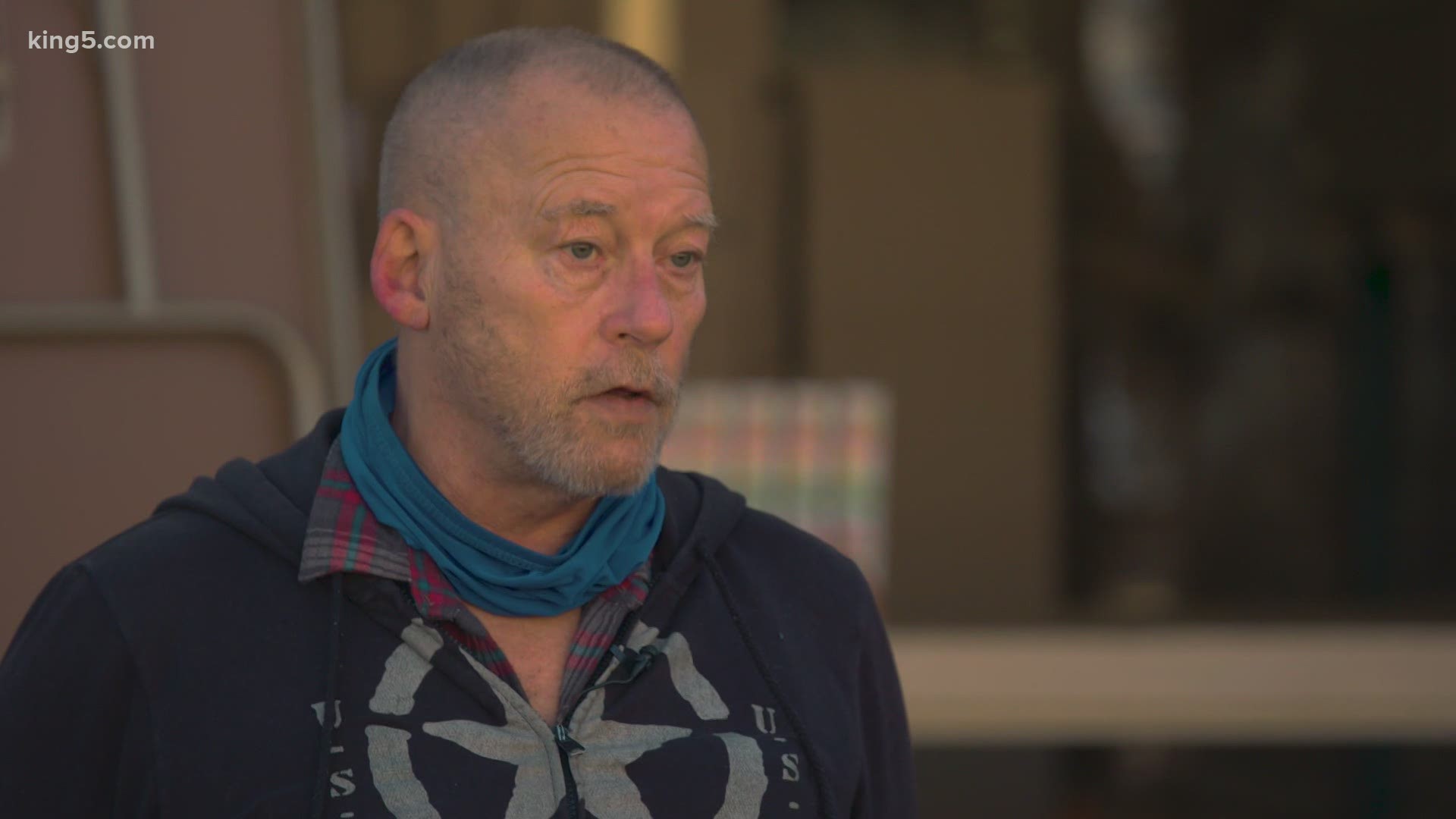 Approximately 100 needy veterans once employed by a Pierce County-based charity are set to be paid back-wages due them. The employees went without pay for weeks at a time in 2018 and 2019 as the leader of the organization, an Army veteran herself, embezzled money from the charity for personal gain, according to court documents.

“We want to look forward. This is a new start for us,” said Army veteran Scott Schulz, 60, of Tacoma. Schulz has relied on gainful employment at the Veterans Independent Enterprises of Washington (VIEW) for 25 years, but fell on uncertain times when the paychecks were late or non-existent.

“For years now, not knowing whether we were going to get paid. Not knowing if one day we’d come in and the doors would be locked. That really takes a toll on you,” Schulz said.

The money to pay back the employees is a result of a $1 million settlement following a lawsuit filed by the Washington State Attorney General’s Office (AG) against the VIEW and its leaders in November 2019. The suit alleged violations of the state’s Charitable Trust Act and other laws.

Although according to documents, the VIEW was in deep debt, the organization had a current insurance policy to cover adverse actions such as mismanagement, employee theft and fraud.

On December 9, 2020, a New Jersey-based insurance company issued the check to the AG’s office, which will turn the money over to benefit the veterans who were harmed, as well as creditors who are owed money by the VIEW.

“This million dollars can be used to pay all of those folks back and I can’t think of a better (situation) than making someone whole for the honorable work that they did and honor the service they gave,” Attorney General Bob Ferguson said. “We obviously feel very, very good about this and have done as well as we can to put a positive outcome on what’s been a really terrible situation.”

The VIEW was formed in Pierce County in 1988 to serve homeless veterans by providing job training, employment, housing and social services. Its leader from 2015 to 2019, Rosemary Hibbler, was at the center of a year-long KING 5 investigation that uncovered the near demise of the organization due to the misappropriation of funds used for Hibbler’s rent, utilities, and gambling in local casinos.

The reports led to the state’s lawsuit, and the AG’s office asking a Pierce County Superior Court Judge to seize control of the charity – the first request of its kind in state history. The judge agreed and assigned attorney Dan Bugbee of Seattle to take charge of the VIEW. Bugbee is an Army veteran himself and a current Lieutenant Colonel in the Washington Army National Guard.

Bugbee fired Hibbler and discovered the existence of the insurance policy soon after taking over the charity.

“(The settlement) is great news and an excellent result given the circumstances. I am thankful there are funds to pay the veterans who did not receive a paycheck,” Bugbee said.

Hibbler has continuously denied wrongdoing. In an email on Jan. 6, Hibbler, who is African American, accused KING 5 and Ferguson of racism.

“With the climate being as it is today, it amazes me that KING 5 is still taking a position to support discrimination and racism,” Hibbler wrote. “The State violated my rights, never conducted an actual investigation and was led to act based on information you provided in your reports…I won’t go into the facts because you’re not interested in truth, just ratings.”

Court documents filed last month in association with the lawsuit reveal more on Hibbler’s financial activities at the VIEW. In what’s called a stipulated judgment, signed by Hibbler, the AG’s office outlined how Hibbler received more than three-and-a-half times her salary, totaling more than $850,000, in her four years at the helm of the organization.

The judgment shows Hibbler spent $192,000 of the VIEW’s money on gambling. Approximately $84,000 was taken via cash withdrawals and direct deposits into her personal bank account. Nearly $30,000 was wasted under her leadership to cover bounced check fees.

The AG’s document also says “as a result of Hibbler’s financial mismanagement,” the VIEW secured more than $1 million in debt against the organization’s homes – money diverted away from serving poor, homeless and disabled veterans.

Hibbler said she does not agree with the AG’s findings.

“The stipulated judgment is simply a way to bring this matter to a close. No admission of guilt is implied or inferred. I wanted this case to go to trial but opted to settle in order to have peace in my life,” Hibbler wrote.

“If you served your country you should never, ever be treated like (the veterans at the VIEW were). You fought, you were willing to die and you served along people who you trusted your life with, there’s no reason for this, ever,” said Shawn Durnen, president of the veteran’s non-profit Nine-Line, based in Fife, that has agreed to take over VIEW operations in order to help save the organization.

“When we saw them on (KING 5) and not being paid for weeks on end, not being paid for months on end and hoping there was some light at the end of the tunnel…it was heartbreaking,” Durnen said. “And to able to look at their faces and tell them that there is (hope), that’s an incredible feeling.”

The stipulated judgment also places conditions on Hibbler. She is “permanently enjoined and restrained” from serving as a director for any charity or soliciting contributions to any charitable organization in the state of Washington. She’s also forbidden from accepting any job from any entity in the state that involves “managing or handling any other persons’ money or property.”

“The message from our office is that if you’re a for-profit large corporation or you’re a non-profit, there are rules you have to follow,” Ferguson said. “You can’t take donations from hard-working Washingtonians who want to be helping out your mission and then take those dollars and use them for your own gain. It doesn’t work that way.”

Hibbler has moved to her home state of Alabama and formed a new charity, N-Side Out, with a mission “to combat homelessness and poverty among veterans and non-veterans by providing a full range of supportive services…,” according to the non-profit’s website. The organization is registered with the Alabama Secretary of State and is soliciting donations on its Facebook page.

Hibbler has also opened a consulting firm, Fiftee 1, that offers services including creating business plans, marketing and small business accounting, according to the website.

Hibbler criticized KING for reporting on her current activities in Alabama.

“The fact that you are including my activities in Alabama proves that you and Bob Ferguson are making attempts to garner negativity and tarnish my reputation. My current activities has no bearing on VIEW or the State of Washington....I am very proud of my accomplishments in spite of the stories you published,” Hibbler wrote.

The Washington state AG’s office has an open criminal investigation, but so far, neither Hibbler nor the former VIEW board members have faced any criminal charges.

“You all attempted to destroy me and you failed. I’m not afraid of your story as it will disappear among the other fact less (sic) stories you presented about me. I survived your other FIVE “investigative” stories. I will be even stronger after this one. I’m in control of the narrative of my life and my accomplishments not you, King 5, (or) Bob Ferguson..,” Hibbler wrote.

Nine-Line, the charity that acquired the VIEW, currently employs a handful of employees who worked under Hibbler. The work includes a contract with Boeing to refurbish respirators. Nine-Line leaders said they hope to acquire additional contracts to support more vets, including assembly work, re-boxing and janitorial work.

“We want to continue to build on the employment opportunities for homeless veterans,” said Durnen, the Nine-Line president.

With a new organization in charge and money on the way, veterans once served by the crumbling VIEW have a renewed sense of hope and purpose in 2021.

“Now we have a good feeling," said long-time employee Scott Schulz. "It is like a huge load being lifted off of us." 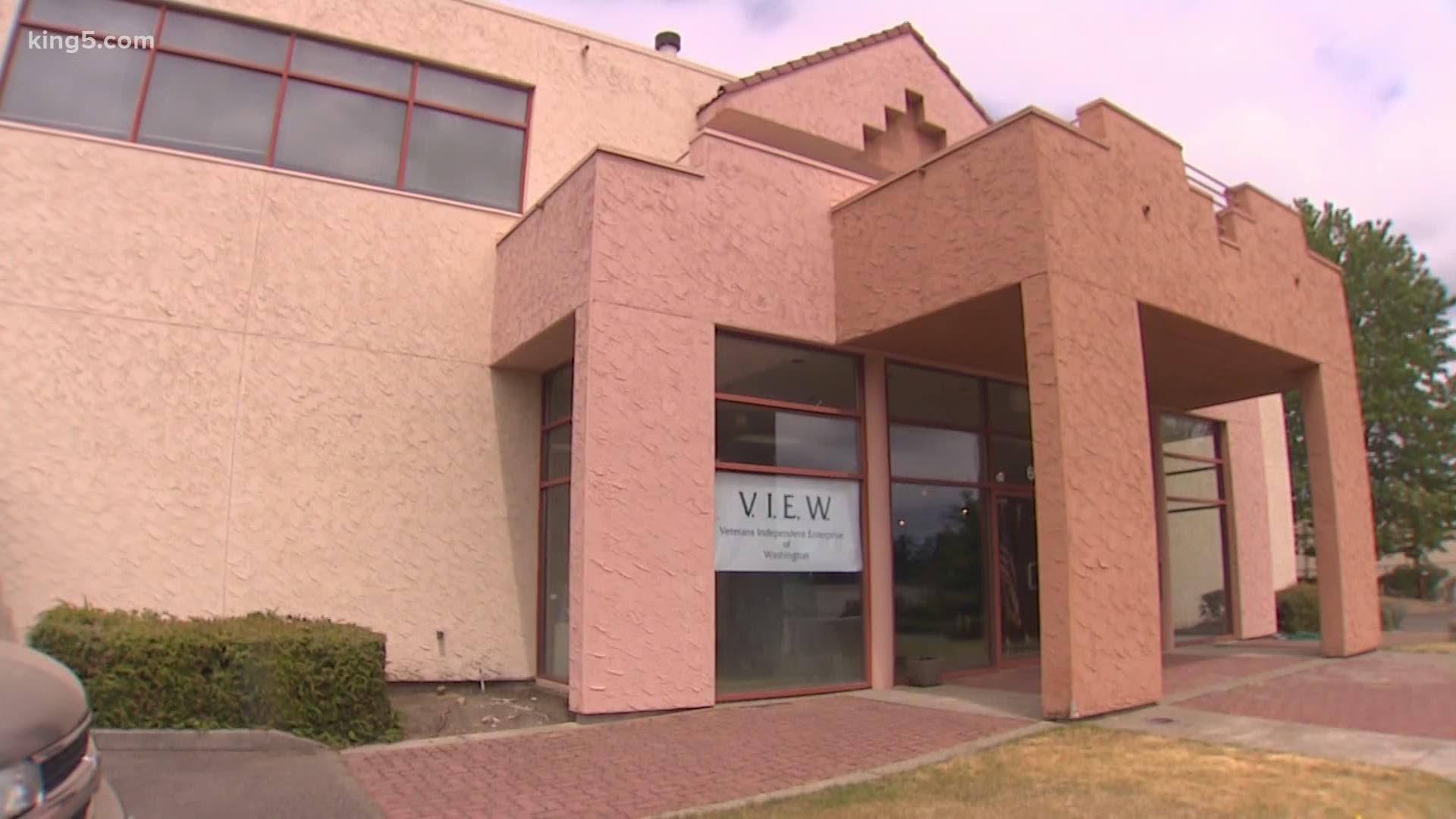