Zoe Hjelm ended up in the hospital three times due to vaping THC. Now, she's telling her story in the hopes it could help prevent others from danger. 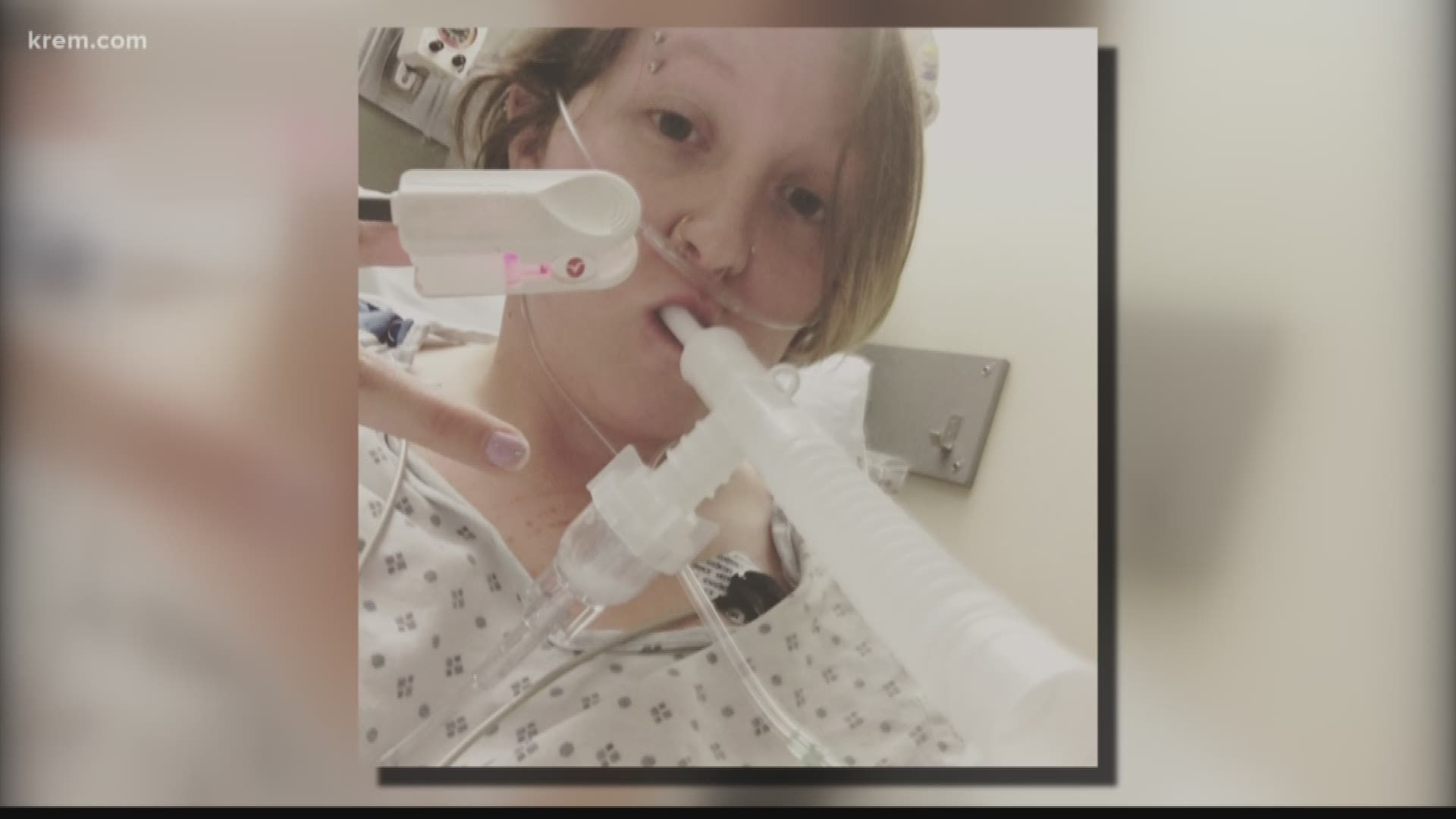 SPOKANE, Wash. — At first, Zoe Hjelm wasn’t sure what landed her in the hospital, battling pneumonia.

Her oxygen levels were dangerously low and her heart rate had skyrocketed.

“I was throwing up and I couldn’t breathe,” Hjelm said. “It’s a terrible feeling to not be able to breathe.”

Hjelm’s first battle with pneumonia happened three years ago, when she was 25 years old. She spent a week in the hospital in total. At one point, the doctors asked her how long she had asthma.

The only problem? Hjelm didn’t have asthma.

Hjelm said they did X-rays on her lungs, which showed that her lungs had been burnt.

“They did x-rays and they noticed that the texture of my lungs looked kind of funky,” she said. “It had shown it was burned. Basically, the inside of my lungs had been burnt.”

RELATED: US vaping illness count jumps to 805, deaths rise to 12

Hjelm had been vaping THC, or cannabis oil, which she thought was supposed to be safer than smoking it. The doctors had asked her if she smoked cigarettes, but not if she had vaped.

But the American Vaping association points to evidence indicating poorly manufactured street vapes containing THC or other substances are to blame for the recent illnesses.

She said she had no idea at the time that the illness was related to her vaping. To be safe, the doctor suggested that she stop vaping for a couple of months, at the very least.

Then, after a couple months of not vaping, she started again. It wasn’t long before she was back in the hospital; in fact, it was only a couple of days after she started vaping again that she said she had again been diagnosed with pneumonia.

She said the doctors were shocked at the cause.

“Doctors were like, ‘Well have you tried vaping as an alternative?’ And I was like, ‘That’s exactly what caused it’ and they were like, ‘Hmmmm, interesting’,” Hjelm said. “Like they almost didn’t, not that they didn’t believe it, but they're like, ‘huh?’’

After her second bout with pneumonia, Hjelm stopped vaping for a couple of years and wondered if vaping THC was the cause of her illnesses.

“When I would try to quit doing it, friends … they just wouldn’t believe that that’s what caused it. They thought it was something else,” she said.

She was again drawn to the growing popularity of vaping pens and the proliferation of fancy flavors. This February, after starting to vape again, she soon got the now-familiar feeling of fluids in her lungs. She rushed to urgent care, where staff quickly took her to the Emergency Room.

Her oxygen dipped below 90, which is when organ failures and possible death can occur, she said. Doctors once again treated her for pneumonia, after which she again started vaping.

“You would think that first time would be enough to not do it again, because that was intense,” she said. “Obviously, there was some sort of something keeping me doing it or else I wouldn’t have continued to do it.”

This July, she had finally hit her limit, saying she was “just done” after she had trouble trying to breathe while just lying down.

Even through the three years of her bouts fighting pneumonia in the hospital, Hjelm said doctors never fully recognized vaping THC could have been the cause of the pneumonia.

Dr. Ben Arthurs, a pulmonologist with Multicare-Rockwood, said the recent string of vaping-related illnesses across the country has caused doctors to spot the possible connection. But, not long ago, he said doctors might have missed it.

“Looking back, we have so many illnesses that result in a questionable diagnosis of pneumonia or inflammation of the lungs, I wouldn’t be surprised if I’ve come across a number of patients in my time in the ICU who have had potentially vaping-related illnesses,” he said.

Arthurs said that there aren’t any treatments currently available to reverse lung damage, so it’s permanent.

“The treatments that we offer up if you come to us with advanced lung disease are really looking at a lung transplant, which is honestly the least effective or potentially the riskiest and most complicated organ transplant that we do in medicine,” he said.

When Hjelm heard about the outbreak of vaping-related illnesses across the country, she said she felt a sense of affirmation.

“I just felt a sense of validation, like I wasn’t the only person,” she said.

Hjelm said she only ever bought her supplies from local smoking or vaping shops and never off the street from third-party sources. She acknowledges that not everyone who vapes some form of cannabis will get sick, but she hopes that sharing her story will help silence some of the speculation that all of these illnesses are part of some type of conspiracy.

Hjelm said she’s living proof, and that she’s lucky to be alive.

“I would hope that people’s stories like mine will deter people because I’m not working for big tobacco or some sort of company like that. You know, personal stories hopefully will help,” she said.

The following video is a report on why vaping-related illnesses seem to be just now happening.