If you're searching Google to buy sex, a Seattle non-profit hopes you'll click on one of their advertisements first. 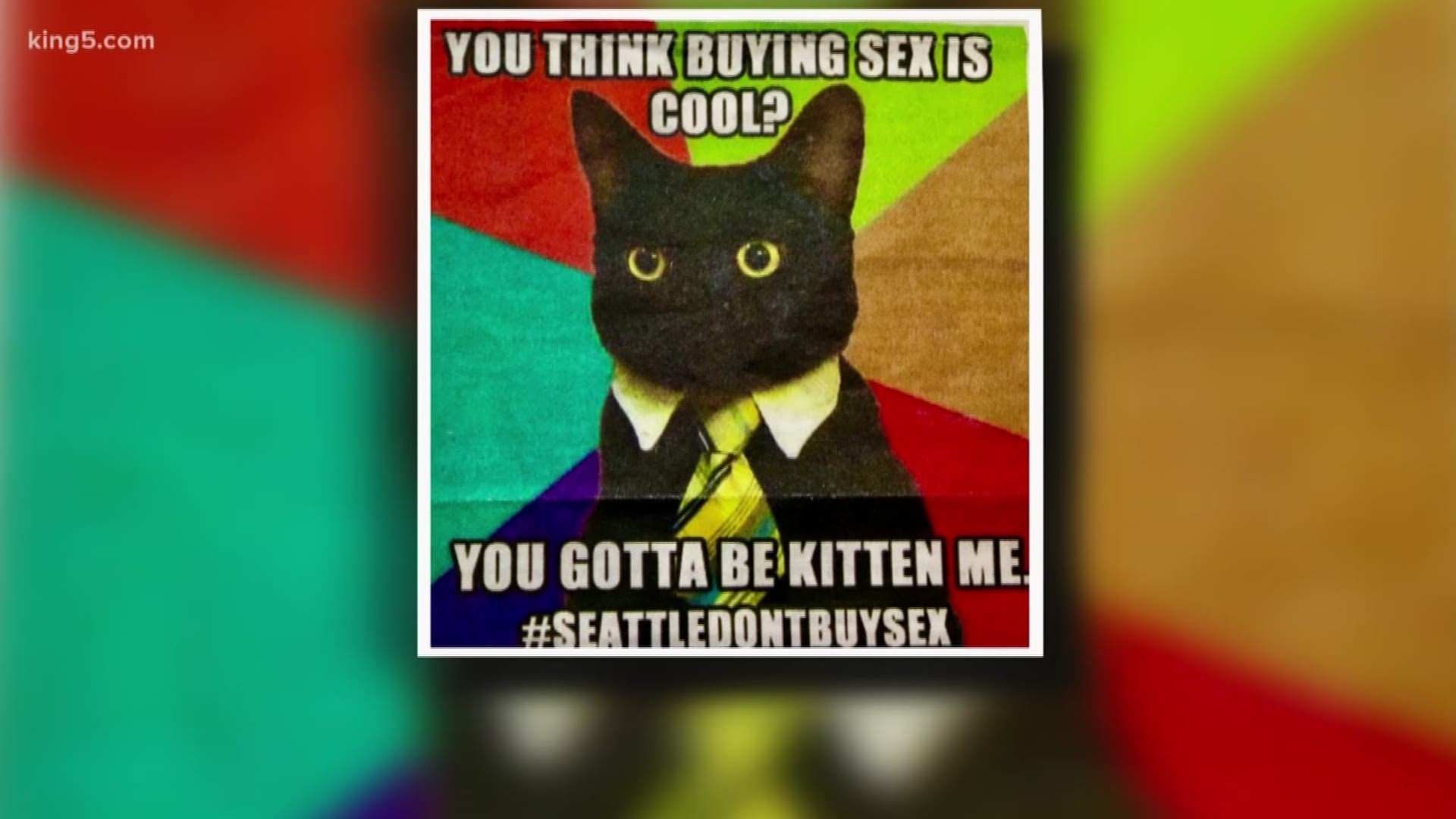 If you're searching Google to buy sex, a Seattle non-profit hopes you'll click on one of their advertisements first.

The anti-trafficking group Seattle Against Slavery is using tech interventions on Google, Bing, Facebook and Instagram to deter thousands of Washington men in the market for sex.

"You just need to convince them, give them information, change the social norm that says it's OK to buy sex from potential trafficking victims or children, and just shift the way they think about it," said Robert Beiser, executive director of Seattle Against Slavery.

"In broad research studies, most of the men who said they bought sex in the last year have also said they want to stop." 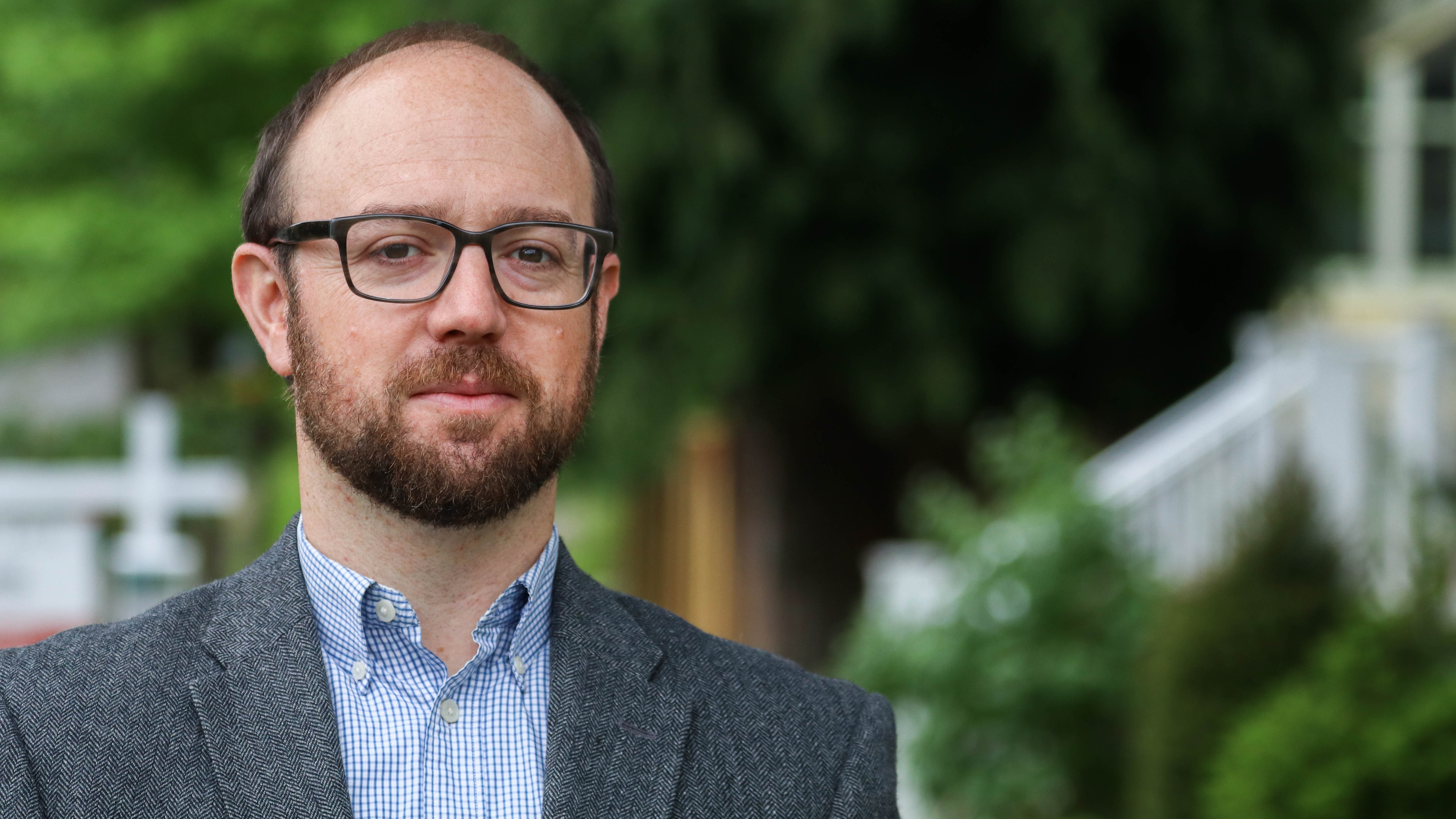 Since 2014, Beiser's non-profit has run millions of online ads in King, Pierce, Skagit, Kitsap, Whatcom and Island counties that link to a website with information about the harmful realities of sex buying.

The website warns men of the legal consequences of buying sex from both adults and minors -- from time in jail and thousands of dollars in fines to registering as a sex offender in Washington state. It also recommends sex-buying alternatives for men who wish to stop buying sex, like a 10-week class that Peter Qualliotine runs.

"Quite honestly," he added. "In the majority of cases, if they knew the real facts about this person's experience, it would be highly unlikely that they would choose to buy sex with them." 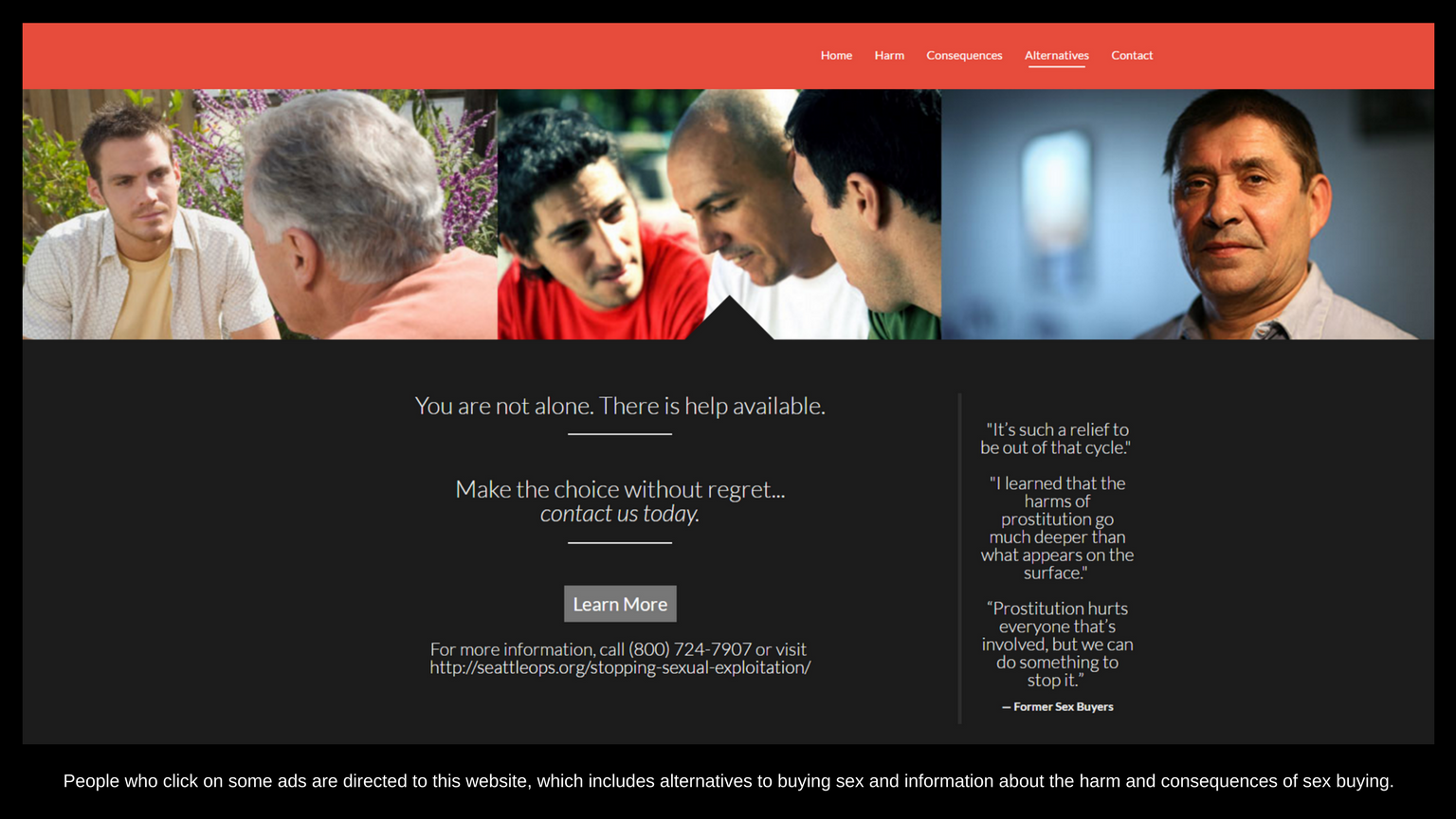 Beiser's digital campaign signals a shift in the way sex trafficking and prostitution now works. Gone are the days when most sex buyers picked up prostitutes on the street in plain view. Experts say the sex industry is increasingly operating behind closed doors and online, which means anti-trafficking groups and law enforcement must get creative to intervene.

"In someone's home (or) at work, people can search to buy sex from a trafficking victim, set up an appointment and be able to meet them in an hour and a half, 45 minutes. They can make appointments for later in the day," Beiser said. "So when we were looking at what interventions would be necessary to get people to stop buying trafficked sex, it was going online and disrupting the pathway where people have such an easy time exploiting others."

RELATED: Why this suburban dad paid for sex with 25 girls

The campaign also comes at the height of a change in mindset across King County and much of the state, as many prosecutors and police officers now place a larger emphasis on targeting sex buyers instead of criminalizing the people who are selling it.

WATCH: Why Seattle Against Slavery is focusing on sex buyers

To reach the men where they are searching for sex, Seattle Against Slavery volunteers created ads on Google and Bing that blend in with regular search results. The ads appear when local Internet users search for topics that imply they're looking to buy sex from a prostitute.

"When someone would search for 'teen escorts,' for example, they would see an ad that would say something like, 'Want to buy sex, but don't want that horrible feeling of regret afterward? This time, make a decision that will help you instead of hurt you,'" Beiser said. 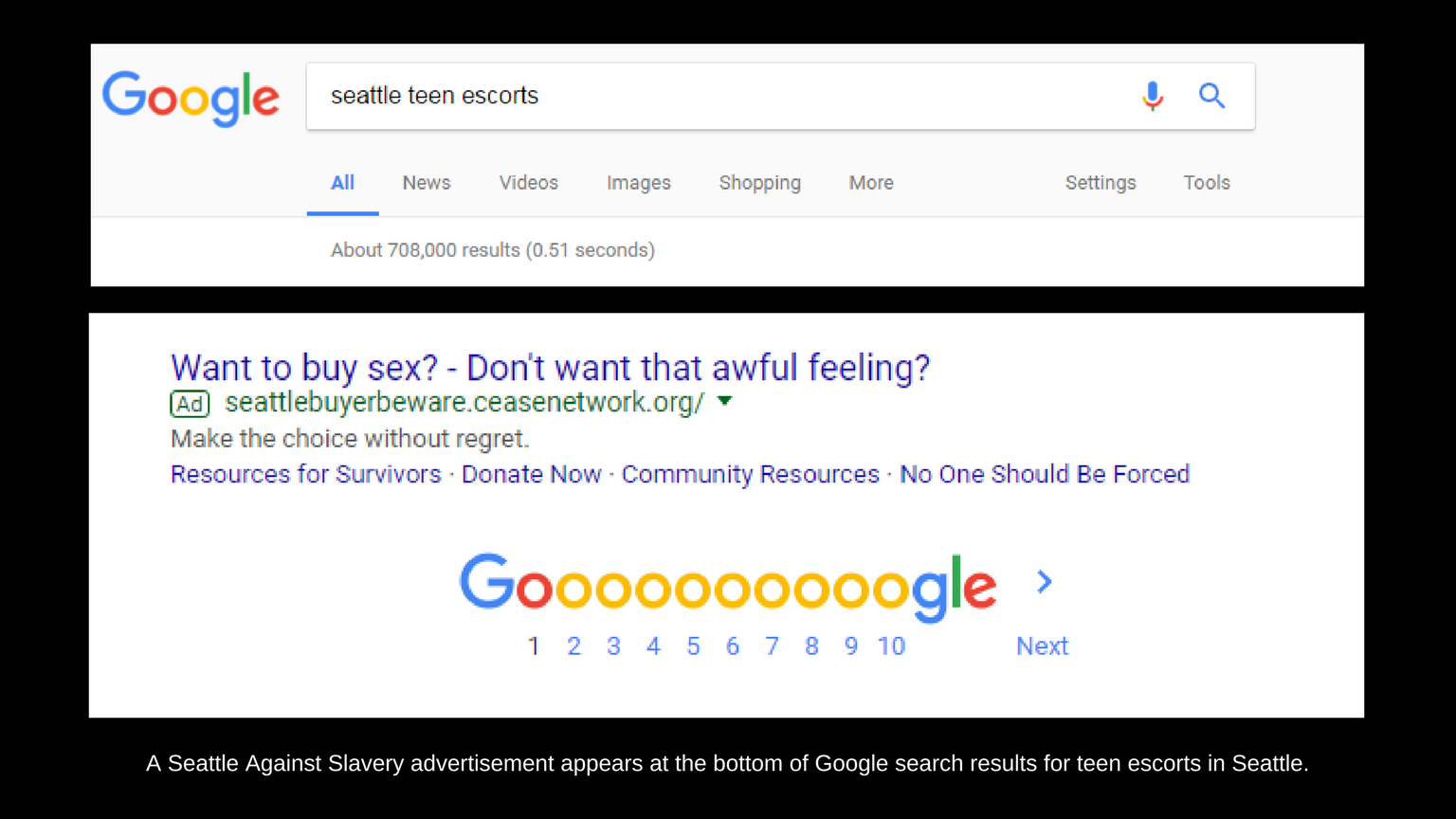 About 2.3 million ads have appeared in local search engine results since February 2014. People clicked on those ads more than 39,800 times, Beiser said.

"We started off with a pretty clear, direct set of search terms -- things related to the sites where sex is being sold -- terms like 'Backpage' and 'Craigslist escorts'," said Beiser. "But then some of the other stuff is about the type of things that people are looking for -- like 'Asian prostitutes' or 'Russian hookers' or you know, the young things like 'young fresh escorts', 'teens', 'college girls,' things like that. "

On Facebook and Instagram, 15-second videos featuring humanizing stories about the consequences of sex buying show up on select King County users' feeds.

WATCH: Examples of the Video Advertisements

Beiser's team works with Facebook to create targeted ads using information about the King County men who have been arrested for buying sex. Using that data, the ads show up for people who are most likely to buy sex or know someone who is buying sex.

"It's maybe a little bit more upstream (than the search engine ads) because we can reach people who aren't actively searching to buy sex," Beiser said. "They just see the ads come up in their newsfeed, but we know that we are targeting the right men because a lot of the men respond and comment back and get into arguments with the ads."

About 1.3 million ads have appeared for Facebook and Instagram users in King County since the non-profit started social media ads in June 2016. People have clicked on the ads more than 25,200 times, Beiser said, and almost 70 men who saw the ads reached out for support this year alone. 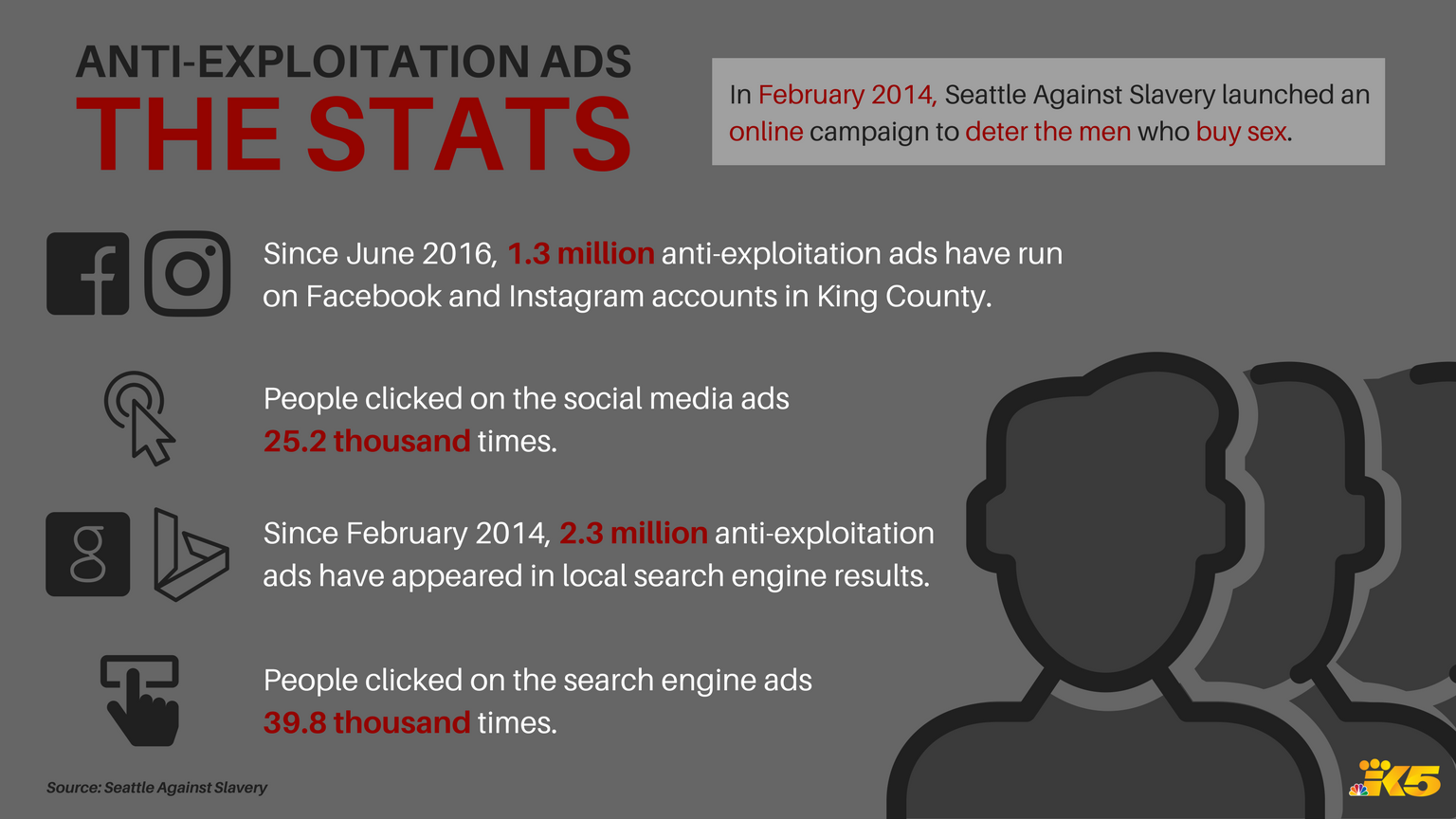 "We really think we can raise the awareness about what's happening -- both the harm that's happening to the people in prostitution and trafficking and also the harm these men are causing to themselves. We can shift the dialogue. This isn't a thing that has to happen anymore. It's totally voluntary, and it can stop, and all we need to do is get the men to stop buying sex."

If You Need Help

The national hotline for human trafficking victims is 888-373-7888. Call this number to report a tip or to request services.

The Organization Of Prostitution Survivors puts on a ten-week program in Seattle for men who wish to stop buying sex.

We've also compiled a list of Washington groups that provide support to prostitution survivors and sex trafficking victims as they recover from their experiences.

This story is affiliated with Selling Girls, a nine-month nationwide investigation into sex trafficking. TEGNA, our parent company, launched the project at each of our 46 stations across the country to help hundreds of thousands of American kids who are lured into a life they didn't choose. To watch the six-part series and to follow KING 5's ongoing local coverage of sex trafficking in Washington state, click this link.

Taylor Mirfendereski is a multimedia journalist, who focuses on in-depth reports for KING 5's digital platforms. Follow her on Twitter @TaylorMirf and like her on Facebook to keep up with her work. For story ideas, e-mail her at tmirfendereski@king5.com.