The lawsuit claims the Washington state Constitution forbids dams from blocking fish passage, as is the case on the Skagit River. 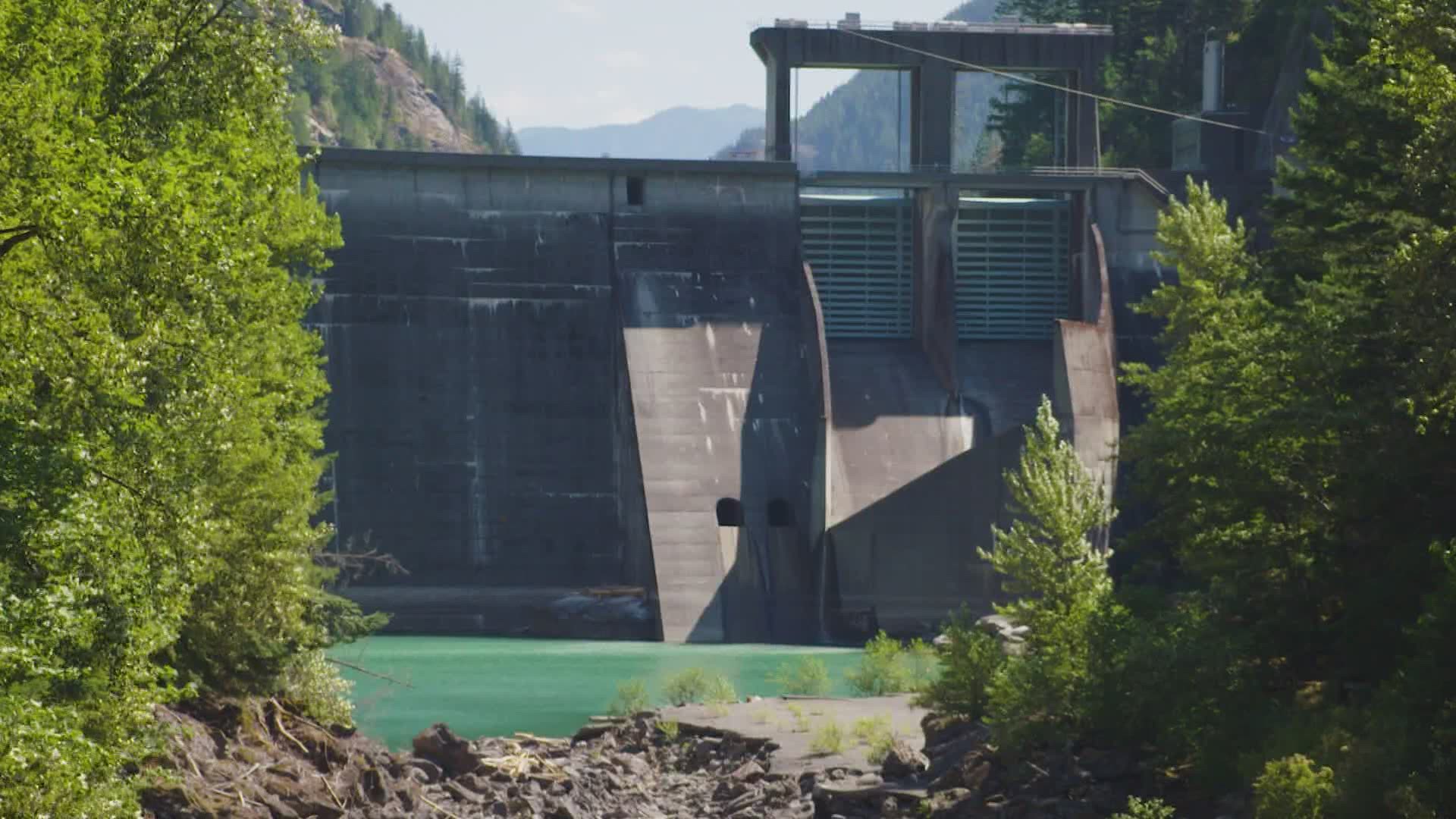 DARRINGTON, Wash. — The Sauk-Suiattle Indian Tribe is one of the smallest tribes in the state of Washington. But that’s not stopping the 350-member tribe from taking on the state’s biggest city.

The Sauk-Suiattle has filed a lawsuit against the city of Seattle in Skagit County Superior Court. The suit argues the city’s public utility, Seattle City Light, is operating its three hydroelectric dams on the Skagit River in a manner that violates state law and is contrary to Section 27 of the Washington state Constitution.

It’s a David versus Goliath story the tribe says it’s ready to take on.

“We’re not backing down,” Tribal Chairman Nino Maltos said. “It can definitely seem intimidating, but to us win or lose, it shows that this is such an important thing to us that we’re willing to take any means. (We’ll) go up against the biggest companies to make this happen – to mitigate (harm to) these fish and to get these passages in that should have been there from the beginning.”

Seattle’s dams on the Skagit generate about 20% of the city’s electricity. Roughly 100 years old, the project is one of the only federally licensed hydroelectric projects in the region that does not include fish passage infrastructure. The project permanently blocks roughly 40% of spawning and rearing habitat for anadromous fish. Anadromous species, such as salmon and steelhead, spend most of their lives in saltwater and return to freshwater to spawn.

Section 12 of the 1848 Congressional Act that established the Territory of Oregon, including what was later Washington Territory, banned dams from blocking salmon.

“…the rivers and streams of water in said Territory of Oregon in which salmon are found, or to which they resort, shall not be obstructed by dams….unless such dams…are so constructed as to allow salmon to pass freely up and down such rivers and streams,” wrote members of Congress.

“…the legislative enactments of the Territory of Oregon….are hereby continued in force in said Territory of Washington until they shall be repealed or amended by future legislation,” wrote authors of the act establishing Washington Territory.

“I think the (utility) has to provide fish passage or the (Gorge) dam has to be removed,” Sauk-Suiattle attorney Jack Fiander said. (The Congressional acts are) very important because those documents formed the basis of the government of this region. It’s what the framers intended.”

Seattle City Light has been embroiled in an adversarial process for more than two years in its quest to get the Skagit Hydroelectric Project relicensed by the federal government. All stakeholders, including Native American tribes of the Skagit Valley, federal and state regulators, Skagit County government and environmental nonprofits formed what they called the Plan B Caucus in 2019 after they felt the utility was “uncooperative” and negotiations were at a “stalemate.”

One of the most controversial issues surrounded fish passage. City Light representatives held firm in public documents and in public meetings that their dams don’t negatively impact salmon. Seven months ago in public documents filed with the federal agency charged with relicensing hydroelectric projects, City Light wrote salmon rarely used the habitat above their dams due to steep canyons and large boulders impassable to fish.

“Existing information indicates that prior to the Project’s existence anadromous fish from the lower Skagit River rarely passed upstream of what is now the Gorge bypass reach,” wrote City Light representatives in December 2020.

In February, the utility changed its position and agreed to study the possibility of fish passage through all three dams, but the city’s mindset didn’t seem to change. In documents outlining the agreement to study passage, City Light reiterated the claim their dams don’t hurt fish.

“Fish spawning and rearing habitat upstream of the Project reservoirs are not affected by Project operations,” wrote City Light officials on February 23, 2021.

The Sauk-Suiattle Tribe, based in Darrington, argues Seattle doesn’t have a choice on fish passage. In the lawsuit, they said the laws forming the territories, including the mandate for fish passage where dams are constructed, carry forward into the Washington state Constitution and state law.

“All laws now in force in the Territory of Washington...shall remain in force...unless they’re repealed by the legislature,” wrote authors in the state constitution in 1889.

Seattle City Light said they don’t comment on active litigation but an executive wrote about the utility’s commitment to working with the tribe.

"Seattle City Light has worked hard to build a relationship with the Sauk-Suiattle Tribe and we have made every effort to listen to and work to address the issues they have identified as part of the relicensing process,” City Light Director of Communications Julie Moore wrote. “City Light has and continues to remain fully accessible to the Tribe to hear and address their concerns on all aspects of the relicensing effort.”

With Chinook salmon at the center of Sauk-Suiattle culture and on the brink of extinction, tribal leaders say the lawsuit should send a message that it’s time for the city of Seattle to take their concerns seriously. So far, they said that hasn’t happened.

“It just adds to the historic pain of the Sauk-Suiattle Tribe, what they’ve experienced, having their voice not heard for so long,” Fiander, the tribe’s attorney, said.

“We have so much at stake,” said Tribal Chairman Maltos. “We have the possible extinction of the King salmon and the effects that will have on our future generations of fishermen. Not only our fishermen but everybody that benefits off the fish that come off the Skagit River.”

Fiander also said they were motivated to file the suit to support other Treaty Tribes of the Skagit Valley. The Upper Skagit Indian Tribe, based in Sedro-Woolley, organized and has led the Plan B Caucus. They’ve been the most vocal tribe throughout the relicensing process.

“There’s strength in numbers and we need to join with our other tribal brothers and sisters and help have their voices be heard,” Fiander said. “We need to show solidarity with our relatives down the road.”

The city has until July 28 to respond to the tribe’s lawsuit. In documents already filed with the court, the city is using outside counsel to defend itself. Instead of working with attorneys from the City Attorney’s Office, City Light has hired the large, international law firm K&L Gates to represent them.