A Renton man who is tied for having the most DUI convictions in Washington narrowly missed a 12th offense in November. 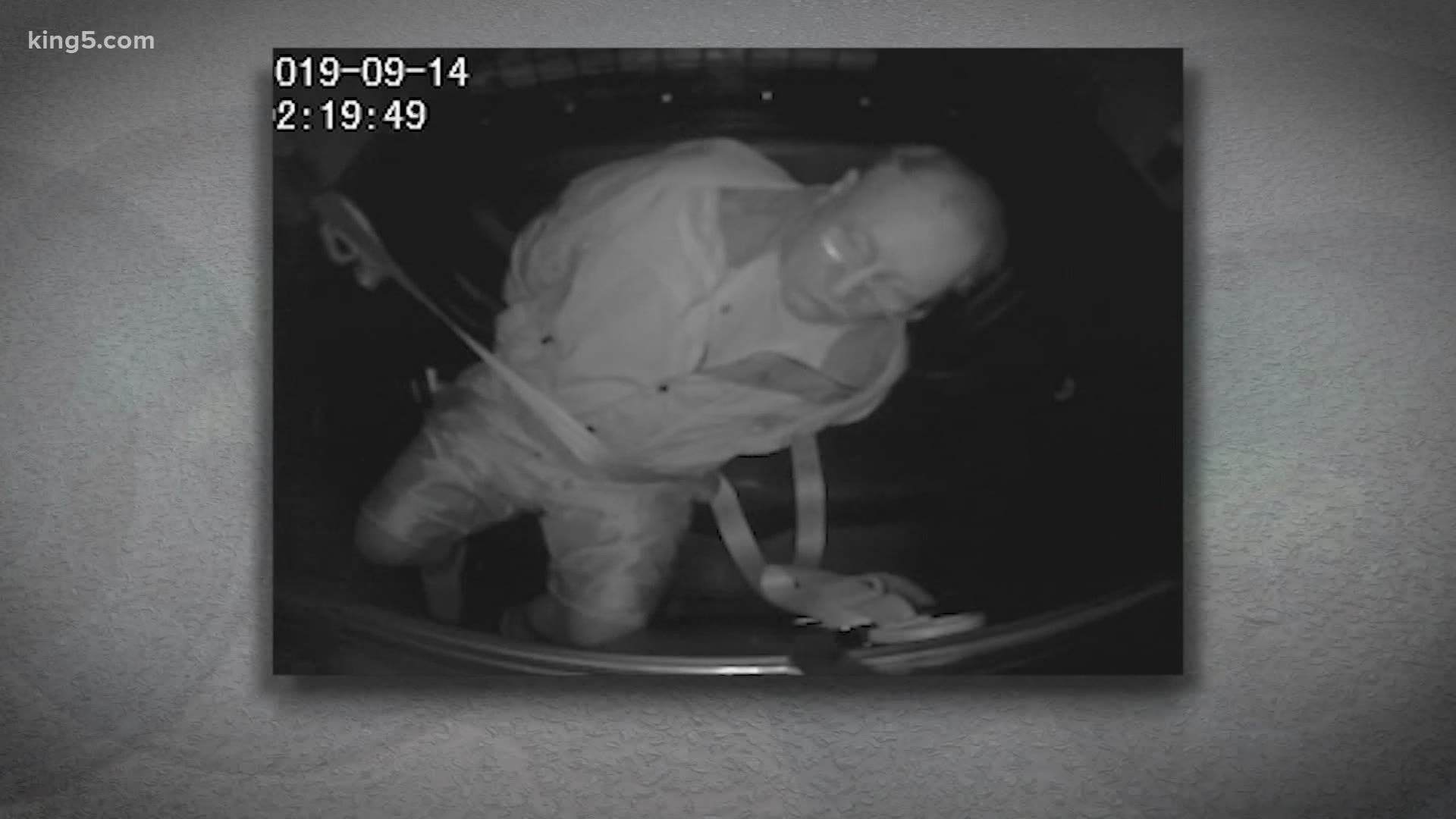 RENTON, Wash. — When Renton police officers pulled over Dean Hermsen in November, his neighbors at the Heritage Forest condos thought the bad times were finally over.

“I was hoping he would be picked up for his 12th DUI,” said Melanie Gonzalez, who lives in the condo above where Hermsen stays with his elderly mother.

Melanie and her husband Alfredo say they saw Hermsen drinking throughout the day on November 27 and then watched him drive off in his mother’s car.

With 11 driving under the influence of alcohol (DUI) convictions over the past 35 years, Hermsen holds the state record, according to Washington Department of Licensing records. He’s one of two people with 11 DUI convictions in Washington records. Five drivers have ten convictions.

He also has a suspended driver’s license and a standing order that – if he could legally drive – would require him to use an ignition interlock device that would breath test him for alcohol before a vehicle would start.

But that November 27 traffic stop turned into a bitter lesson for the Gonzalezes about how difficult it is to keep a repeat drunk driver off the road, even when it appears that authorities have caught him in the act.

“My head kind of exploded, because I was very clear that he had been drinking, and he’s a known alcoholic who gets behind the wheel and drives,” Melanie said.

Court records show Hermsen was first convicted of DUI in Seattle in 1984.

Green has been estranged from her brother for many years and says she’s concerned about the well-being of her elderly mother when Hermsen is in her home.

As her brother racked up DUIs over the decades, Green started attending his court hearings urging authorities to throw the book at Hermsen.

“It’s not safe for the community for Dean to be walking the streets,” said Green, “... or driving.”

The Gonzalezes, at the Heritage Forest Apartments, echo that.

They say Hermsen goes on drunken tirades and becomes verbally and physically threatening with Alfredo, who heads the condo owners’ association in spite of an anti-harassment order that requires Hermsen to stay 25 feet away.

Alfredo started carrying his handgun every time he headed out the door, because calling the police would only put Hermsen in jail for a day or two.

“He goes straight out of jail, he gets drunk and he’s back at home,” Alfredo said.

On November 27, 2019, it looked like Hermsen would finally face serious prison time.

After the Gonzalezes reported him drinking and driving, a Renton police officer pulled him over shortly after Hermsen left the condo complex.

On the officer’s dash cam video recording, obtained by KING 5 through a public records request, Hermsen can be heard telling the officer that he drank “three beers.”

An officer who specializes in DUI arrests was called to the scene to field test Hermsen. Off-camera she can be heard telling him to walk a straight line and to put one foot up in the air, all parts of a sobriety test to determine if Hermsen is too drunk to be behind the wheel.

“I don’t believe you are impaired today based on what I’ve seen,” the officer concluded.

Hermsen was placed under arrest for several misdemeanor charges, like driving without a license, but not felony DUI – which could have sent him away on a long prison sentence.

“He was drunk and driving drunk, so they should have given him a breathalyzer test, not a field sobriety test because he is a professional drunk,” said Alfredo Gonzalez.

The Gonzalezes question why officers didn’t use a breath test machine, which estimates alcohol content in the blood instead of a field sobriety test.

“We have to develop the probable cause first, then arrest them, then they take the (breathalyzer) test,” said Renton police commander Dave Leibman.

Leibman says drivers can refuse to voluntarily take a breath test. Then the officer must rely on the field sobriety test to develop probable cause.

He also says that chronic alcoholics can develop a high tolerance for alcohol. So, drinking several beers may not impair them as they would a non-drinker.

Leibman says Hermsen has been frustrating for police officers, as well as citizens.

“We’ve arrested him 15 times. We have 32 cases on him, and we’ve contacted him many more times than that,” the police commander said.

In Renton municipal court, after Hermsen’s November arrest, Judge Terry L. Jurado reminded Hermsen that he has previously been handed a “zero tolerance” policy for any crimes that involve alcohol. Hermsen could face additional jail time if he is caught in the possession of alcohol.

But Hermsen’s defense attorney Shawn McCully argued that Hermsen’s outbursts are often the result of mental illness. He also says that officers reported that they smelled alcohol on Hermsen, but not necessarily on his breath – meaning that he may not have been drinking.

McCully declined to provide further information to KING 5 when contacted for this story.

“There was no indication the officer observed the defendant drinking the beer…,” Jurado said.

The judge opted not to sentence Hermsen to additional jail time for a case where he interfered with a police officer and obstructed justice.

“The criminal justice system is not working for the common citizen,” a disappointed Alfredo said after attending the court hearing.

When Hermsen was sentenced a few months later for the half-dozen misdemeanors he had racked up – including those from the November 27 traffic stop – he received a jail term that will last months instead of years.

Records at the South Correctional Entity (SCORE), a regionally owned jail in Des Moines, show that he is due to be released September 3, 2020.

Melanie and Alfredo say that isn’t just a problem for neighbors at the condo complex but also anyone who happens to be on the road when Hermsen is behind the wheel.

“Everything he does is escalating toward a tragic ending,” Alfredo said.