An unassuming man who lives near downtown Denver is a well-known neo-Nazi and a rising icon within a violent white extremist group known as Atomwaffen. 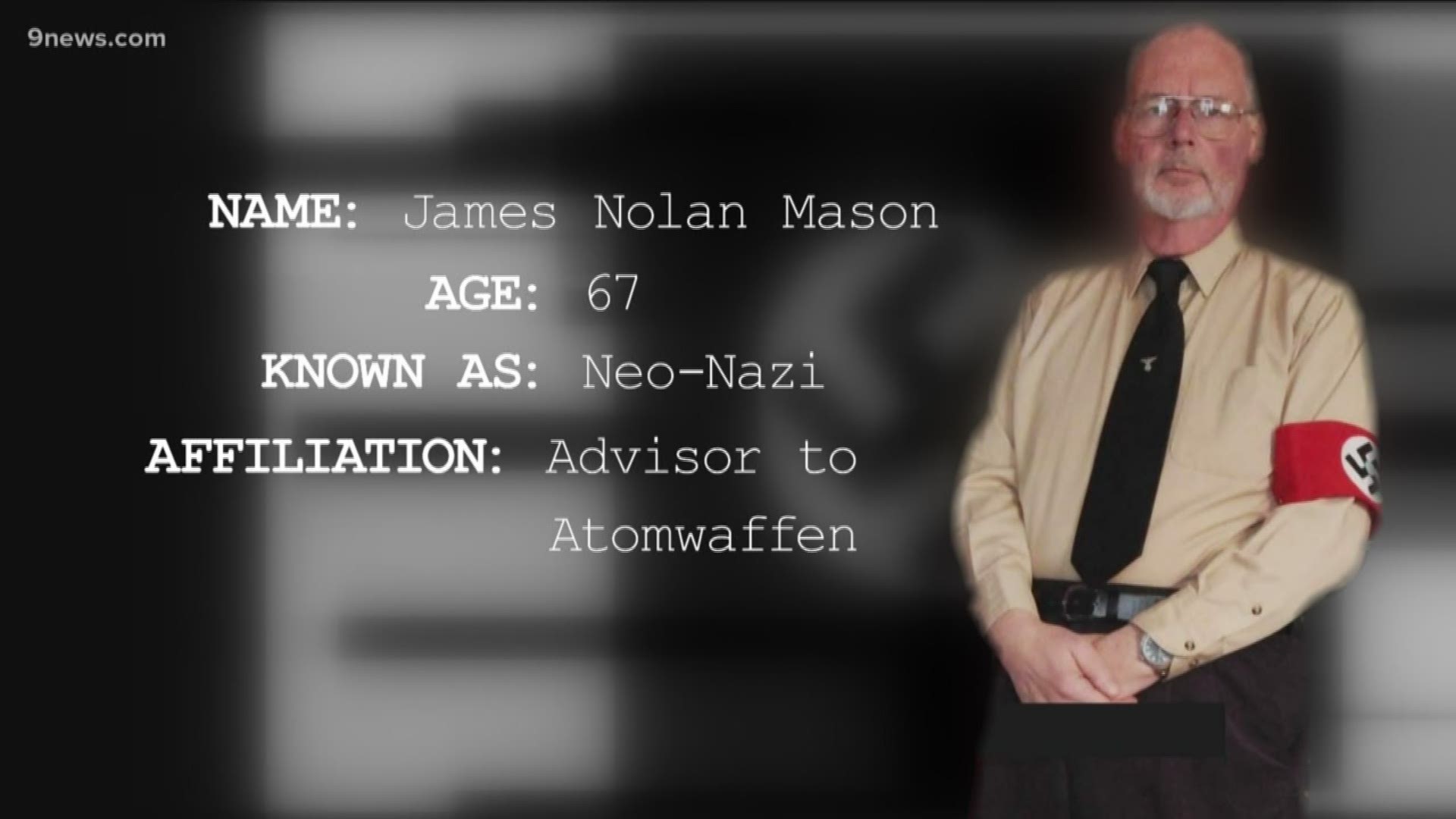 In the bustling neighborhood around Colorado’s Capitol building, the grey-haired man wearing a khaki jacket and black slacks can often be seen walking to the local grocery store, picking up trash in front of his apartment building or going an a stroll to a local senior center.

Beneath the unassuming and benign facade is a prominent modern-day figure within the growing white supremacy movement.

James Nolan Mason, 67, lives a seemingly quiet life around his Section 8 apartment building, yet online, the life-long neo-Nazi has recently found his name, image and writings held to high esteem by a violent group called Atomwaffen, which means “atomic weapon” in German.

Credit: Courtesy 9WTK
A compilation of James Mason who has been spotted walking around Denver.

RELATED: He was a member of a white supremacist group. Here's how he got out.

RELATED: White supremacy groups and other hate organizations are getting more active in Colorado

“Atomwaffen is a small neo-Nazi organization whose members see themselves as soldiers preparing themselves for an impending race war,” said Joanna Mendelson, an investigative researcher who’s been tracking Mason and Atomwaffen for the Anti-Defamation League. “They paint a picture of a genocide and that they see themselves as needing to rise up against the tide that seeks their destruction.”

A book called "Siege," which is a compilation of Mason’s newsletters from the 1980s, has become required reading for members of Atomwaffen. Mendelson said “Siege Culture” is embraced by young men flocking to the white supremacy movement.

Not only are young men embracing Mason and his racist philosophies online, they have been making pilgrimages to Denver to visit their icon in person.

Online images and videos show Mason posing with men in fatigues and skull masks at Red Rocks and in his apartment adorned with swastika flags and other Nazi memorabilia.

Mason has also been actively spreading Atomwaffen’s message from his Denver apartment to the world, through websites and podcasts.

According to the Counter Extremism Project, a nonprofit that tracks hate groups, Siege Culture and Atomwaffen can be tied to five murders.

One of those killings involves suspect Samuel Woodward, 21, who’s been charged in the 2018 fatal stabbing of Blaze Bernstein, 19, in California.

Bernstein, who was Jewish and openly gay, was found dead in Orange County. Charges against Woodward are still pending.

9Wants to Know sought an interview with Mason to ask him if he feels any responsibility for inspiring young men to violence.

In a typed letter, Mason declined an interview for “purely tactical reasons.”

Eventually the author of this article watched Mason walk from his Section 8 apartment and then get a free lunch at a day shelter for homeless senior citizens in Denver this month.

A few days later the author caught up with Mason at a West Colfax parking lot to ask if he feels responsible for inspiring violence.

“If they were acting on my words, they wouldn’t be doing the things they’re doing,” Mason said of Atomwaffen members.

Mason admitted during the exchange with 9Wants to Know that he still advises members of Atomwaffen, but claims he tells them not to act out with violence.

Credit: 9WTK
A still of James Mason from one of his videos. He is a known Neo-Nazi whose work is inspiring the hate group Atomwaffen.

Yet, Mason seems to contradict himself when he talks about how Atomwaffen should commit violence.

“If you must do it, it seems to me to be only common sense that you’d want to do it right, because it’s the end of your life,” Mason said.  “You may die out there in the street via SWAT team, or you may spend the rest of your life in the joint. Make it count for god’s sake."

Mendelsen said this type of rhetoric is what Mason is known for.

“There is no doubt that he dances the line between saying that ‘I'm not associated with this group,’ and yet showing all the markers that indicate that he is fully embedded within this neo-Nazi organization, Atomwaffen,” Mendelson said.

Mason has written much about his distaste for “the system,” including the U.S. government, yet when he was asked about his reliance on charity and taxpayers, he claimed he’s a “guerilla warrior” and that he’s doing what he can to survive.

The Denver FBI office and Denver Police would not say if any of their law enforcement officers have had contact with Mason.

Denver Police did indicate there are recent police records that have been generated that contain Mason’s name, however those records were denied disclosure. In a letter about the records, the city said “we believe it would be contrary to the public interest to provide records from ongoing investigations and the victim identifying information you seek.”