Members of several Tribes called on Seattle leadership to install fish passage on the city's hydroelectric dams on the Skagit River. 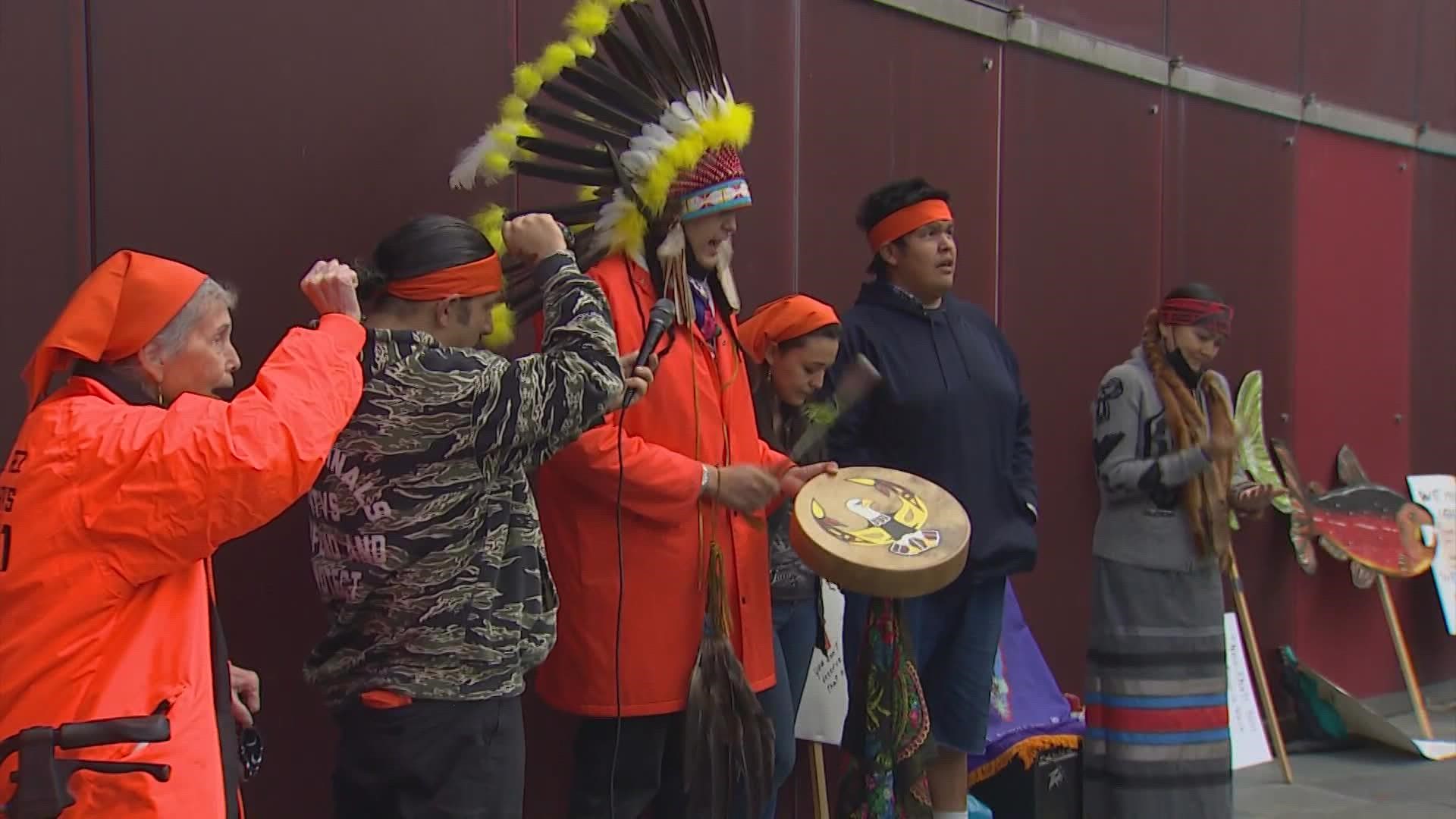 SEATTLE — On Indigenous Peoples Day, Native Americans and supporters held a peaceful protest in front of Seattle City Hall to call on city leadership to better to support tribal rights on the Skagit River.

The city’s public utility, Seattle City Light, has generated hydroelectricity on the Skagit for nearly 100 years. The project is located and has impacts on ancestral lands of the Upper Skagit Indian Tribe, the Sauk-Suiattle Tribe and the Swinomish Tribe.

“We’re here to speak up for the salmon nation, our relatives that live under water because our city has three dams that keep the salmon people from going home to their ancestral lands,” said Jack Fiander, organizer of the protest for the Sauk-Suiattle Tribe.

Seattle’s dams, unlike most hydroelectric facilities in the region, do not include a way for fish to get around the structures, better know as fish passage. Scientists from the three Tribes and every natural resource regulator in the Northwest say the lack of fish passage is killing salmon as the dams block off hundreds of miles of habitat salmon are in dire need of. Three salmonid species of the Skagit are sliding toward extinction and are on the Endangered Species List: Chinook salmon, steelhead, and bull trout.

But in the KING 5 Investigators’ series “Skagit: River of Light and Loss,” reporters have shown that for decades City Light has denied their dams impact salmon. City Light has filed public documents with hundreds of references to the existence of natural fish barriers below Gorge Dam, such as boulders and steep canyons. Those barriers, according to the utility, would prevent salmon from swimming up to their dams.

Protestors showed what they think about Seattle City Light’s denial of impact with signs at the protest such as "Seattle lied, salmon died," and "Seattle, fix your damn dams."

“I think it’s absolutely despicable. I think it’s one more example of the millions of examples of where money and power and light come before people,” said Carol Mangan Kindt of Tacoma, who attended the protest.

The Skagit Valley Treaty Tribes said the dams put their treaty rights at risk. In exchange for handing over all their land in 1855, the government made a promise that the Indians would continue to fish as they had since time immemorial. But with salmon headed toward extinction, state records show Tribal members rarely get to fish as they used to.

“For far too long Indian People have been pushed down into the mud, into the dirt, into the streets. Cast aside like we are nothing, or we didn’t mean anything to anyone. And I like the fact that Sauk-Suiattle has engaged in a huge fight. A huge fight against an enormity of epic proportions…along with the other Skagit River Tribes,” said Robert Howard, Sauk-Suiattle general manager and member of the White Mountain Apache Tribe.

Seattle City Light is currently in the process of getting their dams relicensed by the Federal Energy Regulatory Commission (FERC). Under a new license, the Tribes, environmental nonprofits, Skagit County government and every state and federal natural resource agency has called on the utility to install a fish passage system.

City Light has entered into an agreement to study the possibility of adding to the infrastructure. General Manager and CEO Debra Smith has said the utility is “following the science” and results of the studies will inform the city if fish passage will be “required” under a new license.

Neither the mayor’s office nor the Seattle City Council returned an email requesting a comment on the protest. Seattle City Light responded with a statement underscoring the importance of ongoing studies.

“Seattle City Light is currently working with Tribes and federal and state resource agencies on the questions of whether and how to provide fish passage at the Skagit project. Tribes, agencies, and City Light will consider the results of a fish passage study and multiple other studies that are being done from the project to the estuary to decide what salmon protection and recovery measures to include in the next license,” Julie Moore, City Light director of communications wrote.

Members of several Tribes participated in the protest to show solidarity with Native Americans of the Skagit Basin. They included the Yakama Nation, the Lummi Nation, The Puyallup Tribe, the Standing Rock Sioux, the Chinook Nation of Oregon and the San Carlos Apache of Arizona. They called on the city to build a system to allow salmon to pass the dams even if it’s not a requirement under a new license.