Med Ed Lab’s manager, a former chiropractic physician, lost his license in Nevada after he was accused of insurance billing fraud. 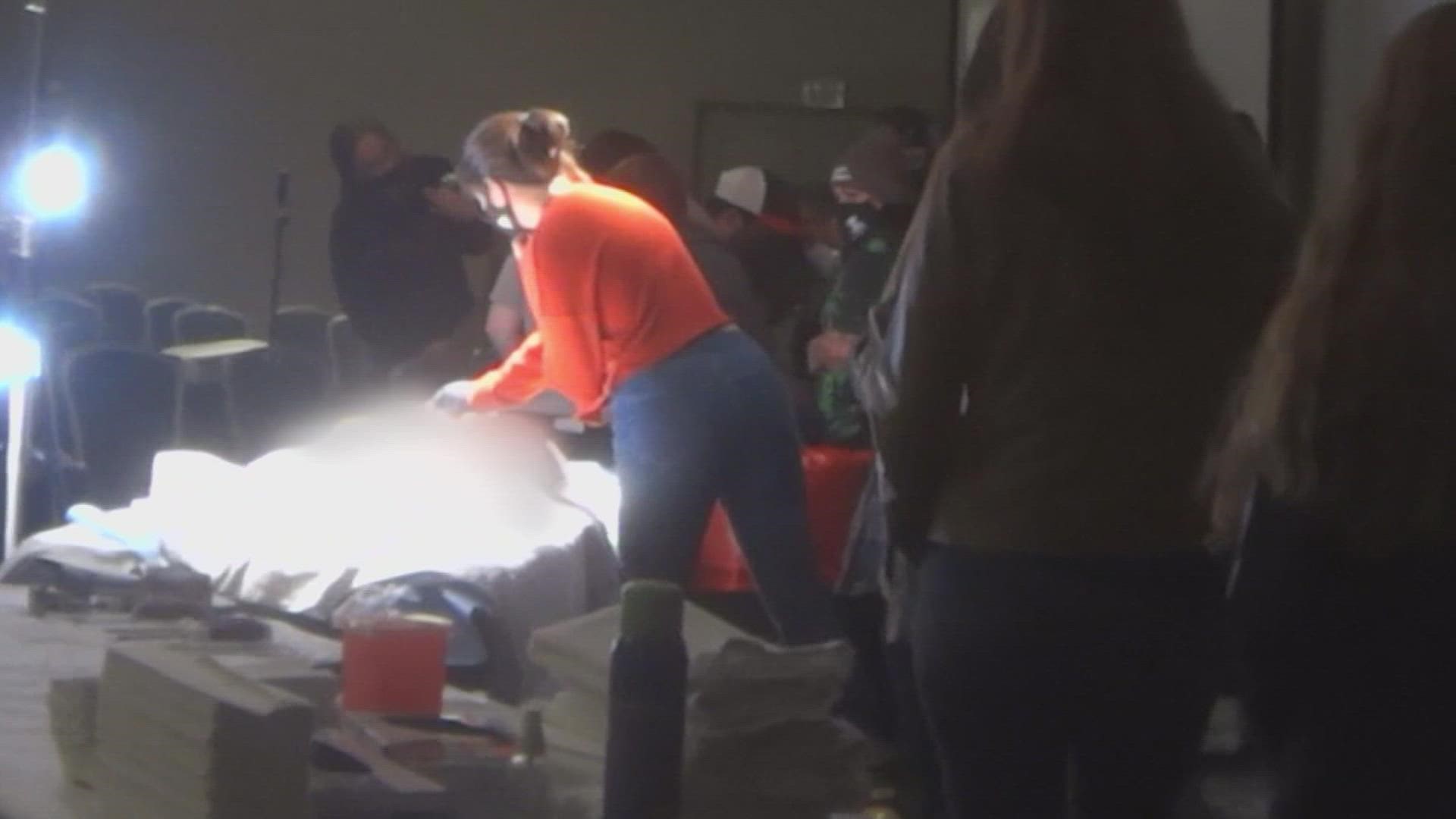 BATON ROUGE, La. — A Louisiana funeral director says he regrets his part in a case in which a 98-year-old man’s body was shipped from a Baton Rouge mortuary service to a public autopsy event in the Pacific Northwest.

“We were like, ‘Oh my God. This is awful. This is terrible,’” said Greg Clark, the owner of Church Funeral Services.

Clark explained how the body of World War II veteran David Saunders ended up in the hands of a “for-profit” body broker after Saunders’ death from COVID-19 in August at a Baton Rouge hospital.

The body broker – Med Ed Labs of Las Vegas – supplied Saunders’ body to DeathScience.org, the organization that used his corpse at a public autopsy event in Portland on Oct. 17 before paying ticketholders.

RELATED: Family of man dissected at autopsy event says they didn’t give consent

Clark said his funeral service contracted with Med Ed Labs in August to help procure and process bodies that Med Ed accepted from donors who believed that their bodies would be donated for scientific and medical research.

“(Med Ed) is paying us to do the removal, the pickup. They’re paying us for the storage (of bodies),” Clark said.

Med Ed has agreements with funeral homes in various parts of the country to help process donated bodies, and those funeral homes receive fees for their work.

Donors and their families are spared the cost of burial or cremation services. Once research on a body is complete, cremated remains are returned to the family along with a death certificate free of charge.

Clark said he ceased ties with Med Ed after about a month because the body broker was accepting the remains of people who died from COVID-19. He found that suspicious since other similar for-profit companies and universities, which run their own body donation programs, do not accept donors who died from COVID.

“We ended the relationship,” Clark said.

But not before Saunders’ family signed a contract at Church Funeral Services to send his body to Med Ed.

Saunders’ 92-year-old widow, Elsie Saunders, was distraught after learning from KING 5 that her husband’s body ended up as the centerpiece at DeathScience.org’s $250-$500 a ticket, in-person autopsy event at a downtown Portland Marriot hotel ballroom. A similar event planned for Halloween day in Seattle was canceled.

“I’ve had multiple conversations over the months with the lab,” said DeathScience.org’s Jeremy Ciliberto.

When asked if Med Ed Labs knew his intentions for the Portland event and had obtained proper consent from the Saunders family, Ciliberto said, “yes.”

However, Med Ed manager Obteen Nassiri said Ciliberto deceived his company and never mentioned anything about a pay-per-view autopsy event.

“We had no knowledge at all,” said Nassiri, whose company provided the cadaver, the equipment and a retired college anatomy professor who performed the anatomical dissection.

Nassiri said his company conducts lab tests on all donor bodies to test for infectious diseases.  He said that after death, viruses like the coronavirus will not survive on the host body, and that’s why they may accept donors who have died from COVID. He said Saunders tested negative for the virus before his remains were sent to the Portland event.

A simple internet search would have revealed to Med Ed that Ciliberto has no professional credentials and Nassiri could not explain how that was missed.

A records search also turned up information about the man who signs his name Dr. Obteen Nassiri.

The Chiropractic Physicians Board of Nevada confirms that Nassiri’s doctor’s license was revoked in 2011 for unprofessional misconduct. In a parallel civil lawsuit, Nassiri and his former chiropractic practice were ordered to pay $3.5 million in a civil lawsuit in which a jury found they submitted fraudulent insurance bills.

“I don’t practice anymore. I haven’t practiced in years,” said Nassiri in response to the question of whether he is truly a doctor.

He said those troubles are years in his past and he denies any wrongdoing.

“Our attorney did not represent us at trial at all,” Nassiri said. “He didn’t show our side of the story or have any witnesses, no experts, no exhibits or anything like that.”

Nassiri said his company is cooperating with authorities in Portland and Louisiana who are investigating following KING 5’s story.

Saunders’ family is weighing its legal options, according to his great-nephew Harold Adkins, a Baton Rouge-based attorney.

“I’ll say this. I wouldn’t put anything off the table,” said Adkins.

But first, the family is planning a memorial service for Saunders to honor the man who served in both World War II and the Korean War.