Looking for concert tickets? Don't be fooled by online scalpers

Consumers are being fooled into buying tickets from online scalpers posing as the official event venue, often leading them to pay inflated prices for subpar seats. 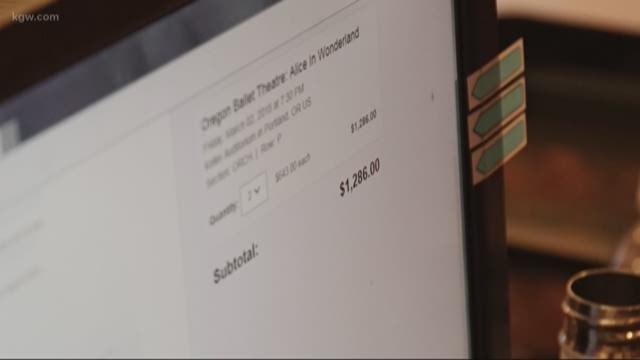 PORTLAND, Ore. -- Looking for tickets for an upcoming concert? Be careful. Consumers are being fooled into buying tickets from online scalpers posing as the official event venue, often leading them to pay inflated prices for subpar seats.

“We thought we were on the performing arts center website, but instead we found out that it was a rogue ticket seller,” said Steve Hubbard of Portland, who fell victim to the online ticketing trick.

Hubbard got fooled after searching online for tickets for “Peppa Pig Live”. He wanted to take his grandchildren to the theatrical tour of the popular cartoon show.

A Google search revealed several advertisements for “Peppa Pig Live” tickets in Portland. After clicking on one of the links, he found five tickets available for $490. Hubbard admits, it was a lot of money.

“I felt like I was under the gun because I sensed this thing was going to sell out and I wanted to move quickly,” said Hubbard.

Moments later, Hubbard received an email from Ticketoffices.com confirming his purchase although the email seemed odd. There was a section and row listed, but no seat numbers.

Hubbard was concerned. He went to the official ticket office for the Arlene Schnitzer Concert Hall in downtown Portland where “Peppa Pig Live” was scheduled to perform.

An employee at the venue said they were not familiar with the third-party website Hubbard used to buy the tickets. The employee explained the official box office still had plenty of tickets available and they were much cheaper than the third-party site.

“You get stung by these rogue hijackers,” said Hubbard.

The tactic is called white labeling. It’s when consumers are tricked into buying tickets from scalper sites designed to resemble the official webpages of major concert halls, often with deceptive images, names and URLs.

For example, an online search for concert tickets in Portland included an ad for “arleneschnitzer.concerthallportland.com”. The website has no direct or formal affiliation with the Arlene Schnitzer Concert Hall.

“You could probably find tickets on third party websites for almost every show we have,” said Robyn Williams, executive director of Portland 5 Centers for the Arts, which operates the Arlene Schnitzer Concert Hall.

For example: KGW used keywords “Peppa Pig Portland Oregon” in a Google search. The first four listings that appeared were paid ads for third party ticket sites. None of them were the official box office.

“It’s not just the super-hot shows that everyone thinks is going to sell out that are on these third party sites – virtually any ticket could be on a site,” said Williams. Consumers may not be aware they are being charged higher prices due to markups.

To prove the point, Williams searched for tickets online for the Oregon Ballet Theatre’s performance of ALICE (in wonderland). A third-party scalper site advertised tickets in row P for $643 each. No section or seat number was provided. The official box office had similar seats available between $29 and $60, depending on the section.

Williams said many consumers get upset when they realize the ticket price they paid is far more than face value. Sometimes tickets acquired from third-party sites don’t work -- they’re fakes. Additionally, some consumers may be put off by high ticket prices advertised on scalper sites.

“We hear from people who say, ‘Oh, I really wanted to see the show but I couldn’t afford $200 for the tickets’ because they looked at the scalping site when maybe the highest price for the ticket was 80 bucks,” explained Williams.

The 5th Avenue Theater in Seattle also warned against purchasing overpriced scalper tickets posted on non-partner ticket websites, even ones that seem legitimate, such as Ticketmaster.

“We understand that certain actors in the market employ practices to confuse consumers regarding the identity of vendors,” wrote Senator Cory Booker of New Jersey and Senator Orrin Hatch of Utah in the letter to the F.T.C.

Cracking down on abuse in the online ticket resale market is difficult.

“These are slippery actors,” said Steve DelBianco, executive director of the consumer advocacy group NetChoice. “They will close a website down and open up a new website with new domain names to fool new customers.”

DelBianco said state and federal authorities have the ability to go after unfair and deceptive trade practices.

In 2014, an online ticketing company, TicketNetwork agreed to pay $1.4 million to settle a federal complaint that it allegedly used deceptive marketing tactics to resell tickets.

An investigation by the F.T.C. and officials in Connecticut found the company fooled customers into buying tickets though scalper sites designed to resemble official looking websites of major venues.

The industry is also taking action. Last week, Google tightened its standards by requiring all ticket resellers to be certified. Scalpers using the online advertising service Google AdWords can’t imply they are primary box office, must prominently disclose themselves as a ticket reseller and clearly note that prices may be above face value.

Consumers looking to avoid getting tricked by a scalper site should beware of clicking on the first advertisement they see.

“Take some time to really study the website,” said Williams of Portland 5 Centers for the Arts.

If you aren’t sure if a website is directly associated with the venue, contact the box office to confirm. Consumers should always read the fine print, take your time and compare prices.

“Even the most sophisticated Internet users can be duped, particularly when they are anxious to get a seat for a concert they really want to attend,” warned the consumer advocate DelBianco.