The KING 5 Investigators have found a lack of caregivers in the community has led to people getting stuck in hospitals for months and even years. 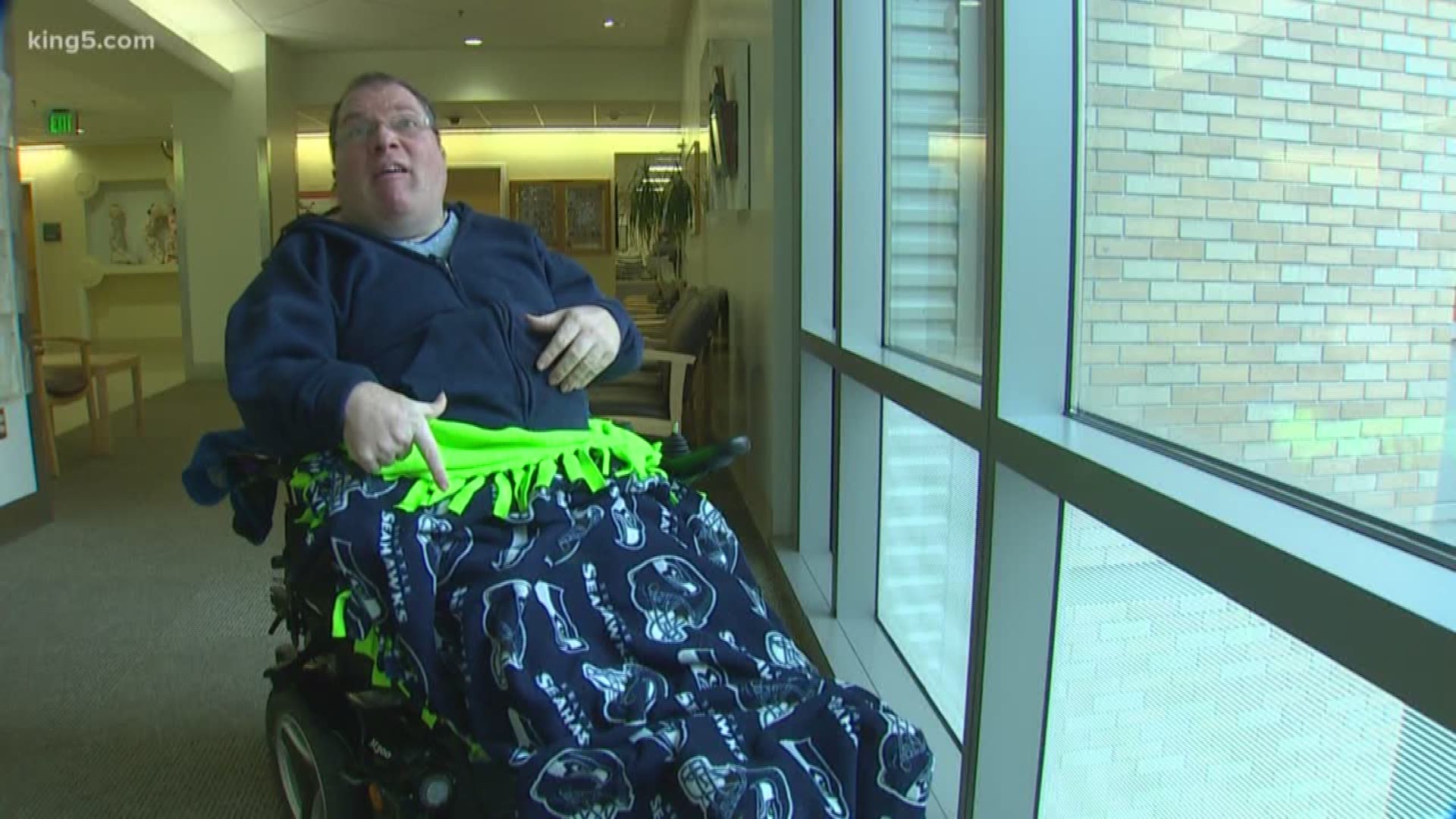 On October 31, 2018, Shawn Murinko ventured out to trick or treat with his wife and two daughters in their Olympia area neighborhood. Shortly after the festivities began Murinko had an accident that has altered nearly every facet of his life.

The 42-year-old has cerebral palsy and has used a wheelchair his entire life. In the dark on Halloween, he accidentally crashed his wheelchair over a curb. The force crushed both of his legs.

Murinko was rushed to Harborview Medical Center in Seattle. Three surgeries and six weeks later he was healed enough to head home. But six weeks turned into six months. Half a year later Murinko is still in the hospital, stuck, with no medical reason to be there.

“I feel like I’ve been caught up in a bureaucracy and in a system that is broken,” Murinko said.

Murinko is one of hundreds of people currently stranded in hospitals in the state of Washington with no medical reason to be there. They’re victims of a system that lacks enough community-based resources to meet their needs. Washington does not have an adequate number of caregivers and facilities to appropriately and safely care for those with disabilities, mental health problems and behavior issues.

Scott Livengood, CEO of Alpha Supported Living Services, which supports people with developmental disabilities in the community, calls the situation a “staffing crisis.”

The legislature sets the pay for direct care providers who work for state-contracted agencies. The state average is currently $12.24 an hour, just above minimum wage, for a job that can be extremely demanding.

“The work is too challenging for this type of pay. We just can’t keep them,” said Livengood. “Agencies continue to tread water and not make inroads to addressing the staffing crisis and turnover challenges.”

Livengood said the state average staff turnover rate is 50 percent. Every year, half of all caregivers hired by agencies quit the job.

How Murinko got stuck at Harborview

In Shawn Murinko’s case he had skilled caregivers who work for a state contracted agency for a decade. They helped him with his many medical needs at home and at his job. His needs are too great for his family to handle them safely at home without assistance.

During Murinko’s initial weeks at Harborview, his caregiver agency dropped him as a client. His two caregivers had been transferred to other positions, and the agency said it did not have the capacity to take him back. Since then no other agency has been able or willing to take him on.

“I think the hardest part is I’ve missed so much with my family. I’ve missed choir concerts, I’ve missed watching my daughter swim,” Murinko said. “There are days...when frankly, I can’t stop crying, because I just don’t know what the future holds.”

The way the state Department of Social and Health Services (DSHS) contracts with the agencies, there is nothing to prevent clients from being rejected or ejected from their services.

The state’s arm of DSHS that administers services to citizens with developmental disabilities, the Developmental Disabilities Administration (DDA), said they work rigorously to prevent unnecessary hospitalizations.

“We employ medical hospital liaisons statewide whose job duties specifically include working with hospitals on discharge planning,” said Lisa Copeland of DDA in response to questions submitted by KING 5. “Preventing unnecessary hospitalizations is a goal we all share. Providers need a rate increase in order to hire, recruit, train, and retain qualified staff who can care for individuals with unique needs. DDA staff make the best use of the limited resources we have to make sure clients are safe and healthy in the community.”

Data collected by the Washington State Hospital Association (WSHA) shows the problem has developed into a crisis in the state. Over a three-month period, May 2018 through July 2018, the association collected data from 11 Western Washington hospitals, including the UW Medical Center in Seattle, Tacoma General, and Overlake Medical Center in Bellevue. The hospitals reported 1,441 people stranded in their facilities, with no medical reason to be there in that time period.

“We were pretty startled, actually (to the numbers),” said Cassie Sauer, president and CEO of WSHA. “These are serious concerns we need to address now before they get worse.”

Sauer added that no hospital would ever discharge a patient without a safe place for them to go.

In addition to the human cost, there’s a staggering financial one.

The KING 5 Investigators calculated an approximate cost that the 11 hospitals had to pay to house and care for the 1,441 people identified in the survey last spring. The amount is approximately $60 million in uncompensated care for people who had no business being in the hospital in the first place. The reporters came to the approximate number by multiplying the total number of “avoidable days” spent in the 11 hospitals by the average cost per day for a hospital stay. WSHA estimates the average cost to be between $600 and $1,000 per day for the most basic hospital care.

The cost is shifted to paying patients.

“So it essentially gets billed onto everyone else’s hospital bill. The hospital spreads the cost over people who do pay for their hospital care,” said Sauer.

Many patients stranded by family members or group homes

In December 2018, the state Office of Developmental Disabilities Ombuds published a report entitled “Stuck in the Hospital” after receiving complaints about people with developmental disabilities getting stranded in hospitals.

The ombuds report does not provide names or locations of hospitals due to confidentiality issues.

Here is a sample of some of the complaints received by the ombuds:

The ombuds offered specific policy recommendations to improve the system, including increasing the financial investment by the state in residential service providers to enable them to hire and maintain a skilled and stable workforce.

“This situation is dangerous for the individuals involved and costly to the medical system,” wrote Betty Schwieterman, Office of the Developmental Disabilities Ombuds in the report.

“This is a preventable problem. Changes can be made to the service system to ensure individuals with developmental disabilities have access to services that keep them in the community and prevent inappropriate hospital stays,” said Schwieterman.

Murinko may be the very last person with a disability you’d expect to end up stuck in the hospital. He is one of the state’s top disability rights experts, an attorney, and an official at the Washington state Department of Health. Murinko serves as the department’s chief of civil rights and risk management. If this can happen to him, it can happen to anybody.

“What keeps me awake at night is I know there are people who don’t have that same access, who either don’t know how to advocate for themselves or can’t,” said Murinko. “As an advocate, I’m outraged.”