Officers can be heard blaming the man’s death – at least in part – on their inability to respond to the earlier 911 call from the man’s girlfriend. 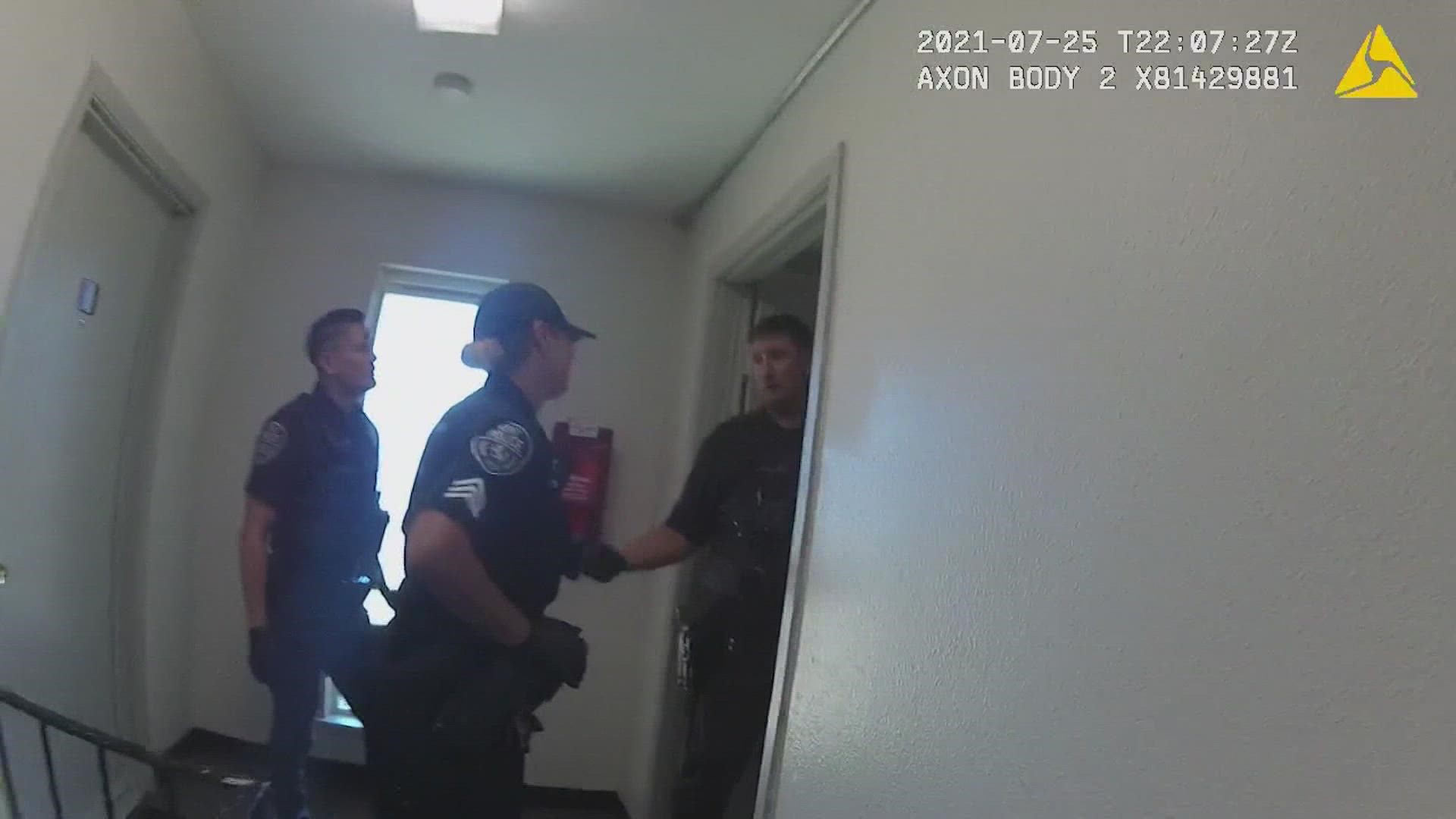 A woman told the dispatcher that her boyfriend wrote a suicide note and was threatening to kill himself. No one responded to that call for help. Not police, not medic crews or any crisis response team.

Eight hours later the man was dead. He shot himself with his own handgun in the presence of three family members who had rushed down to Kent from their homes in Snohomish County to try to get him help, according to police reports.

In body camera footage from the police response after the shooting, obtained by KING 5 through a public records request, officers can be heard blaming the man’s death – at least in part – on their inability to respond to the earlier 911 call from the man’s girlfriend.

“Shame they put new laws in place... could have helped him,” one officer said outside the man’s apartment.

“Well, thanks legislators,” said another.

In Kent, a policy that took effect that Sunday morning directed officers not to respond to such a call.

In a section of the policy called “Suicidal Subjects,” the document says, “If a suicidal subject is alone in their residence and doesn’t present a threat to anyone else, officers will not respond to the scene.”

But Chief Padilla sees it another way.

“It says if you mess up, here are all the things that are going to happen to you.  You could lose your career. You can be prosecuted. You could be decertified,” Padilla said.

The new laws also limit the force that officers can use if they face escalating aggression during a mental health call, Padilla said. The department’s legal counsel said the laws result in increased risks for officers and increased liability for the police force, according to Padilla.

Padilla’s policy draws what he calls a “bright line” that prevents his officers from responding to some mental health calls.

“For someone to lose their life when (we) feel like there might have been something more done is very tragic and frustrating,” Padilla said.

The architects of the police reform laws say departments are “weaponizing” the new law by overstating its impacts and choosing not to respond to calls.

The Washington Coalition for Police Accountability called a press conference Aug. 10 to counter what it called “…a police disinformation campaign” around the 2021 legislation.

“Law enforcement’s response to these reforms is a coordinated political attack where officers are refusing to do their job and blaming the police defund movement,” said Davitta Briscoe, whose brother was killed by Seattle police in 2016.

The American Civil Liberties Union’s police practices expert say there is nothing in the new legislation that stops officers from responding to any call that they would have responded to before the reforms took effect.

“It sounds like that is a choice they made, and they shouldn’t be blaming that choice on the law,” said Enoka Herat of the Kent Police Department’s decision not to respond to a 911 call. She co-authored a blog that counters the narrative some law enforcement agencies are pushing.

Chief Padilla stresses that officers may not have shown up at the door of the despondent man at the Washington Park Apartments even before HB 1310. The fact the man had a handgun that increased the risks to the officers, and that he was not threatening anyone else, factored into the call response before HB 1310.

“We would not have gone in, kicked the door, forced a confrontation,” Padilla said.

However, he said officers may have tried to reach the man on a loudspeaker or peeked in a window to try to contact him. Those options are not permitted under the department’s new policy.

Karen Davis is thankful for the two dozen or so times that police have come to her aid.

“I wouldn’t be around right now (if they hadn’t come),” the 62-year-old Spanaway woman said. “They’ve stopped me from hurting myself, from killing myself."

She has long battled mental illness and said that a situation like the one in Kent, in which no emergency crews responded to a 911 call, highlights that the law needs drastic changes.

“These new reform laws are preventing them from helping those of us, me, who need their help,” said Davis, who is a former board member of the Pierce County chapter of the National Alliance on Mental Illness.

If you or someone you know is in distress the National Suicide Prevention hotline is a phone call away. Call 1-800-273-8255 at any time for free, confidential support.