In May 2019, radiation leaked from a device at Harborview Research and Training. At first called a “minor” breach, investigators warn it could have been much worse. 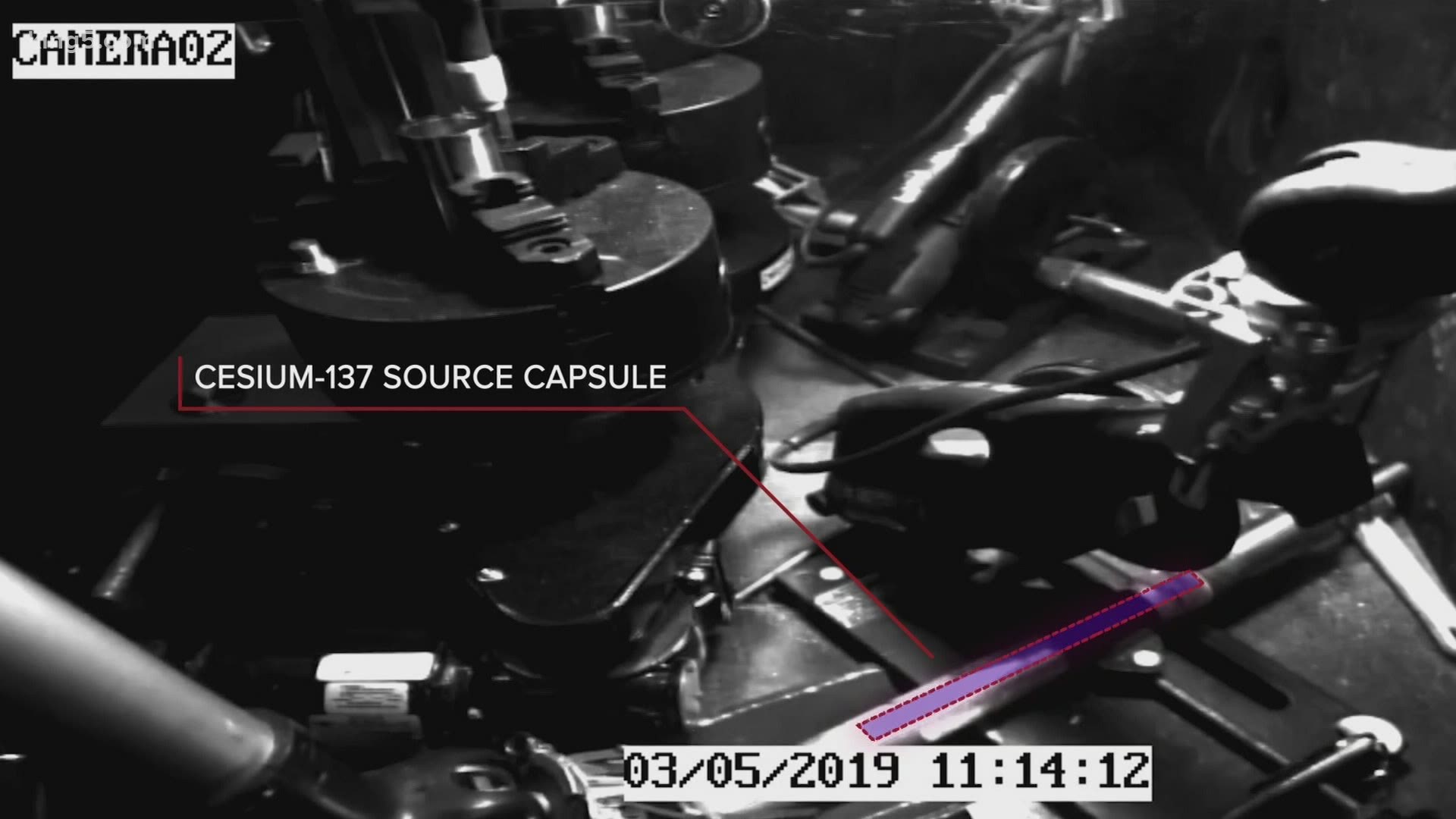 SEATTLE — A March report from the U.S. Department of Energy (DOE) says a radiation leak at the Harborview Research and Training Building one year ago was “preventable” and “a near miss to a significant event” that could have devastated the Seattle area.

“It is a wake-up call for all of us,” said Dr. Jacob Kamen, a radiation expert at Mount Sinai Health System in New York City, who reviewed the 175-page report at KING 5’s request.

When radiation leaked from a medical device that a contractor was decommissioning on May 2, 2019 it was called a “minor” breach at the time.

But the DOE investigation revealed a stunning lack of oversight by federal regulators and a federally licensed contractor who pushed “…mission completion over safe conduct.”

Greg Wolf, a spokesman for the National Nuclear Security Administration (NNSA), which led the investigation, said the report was meant to be blunt so the same safety breakdowns would not happen again.

“In this joint investigation NNSA took an unflinching look at the incident and concluded that it was preventable. It was largely a result of weak and partially implemented oversight processes,” Wolf said.

The contractor, International Isotopes of Idaho Falls, was hired to remove and safely transport for disposal a capsule of radioactive Cesium 137, the same nuclear product produced in the Chernobyl meltdown in Ukraine in 1986.

The capsule powered a barrel-sized medical device called an irradiator that uses gamma rays to kill germs – in blood, for instance – for medicine and research.

Harborview Research and Training is in a building next door to the Harborview Medical Center, which overlooks downtown Seattle from its perch on First Hill.

Its irradiator was one of three in the University of Washington medical and research system that was being disposed of as part of a project by the DOE.

Video released by the DOE at KING 5’s request shows a serious mistake as the contractor uses an electric hand saw to cut into an aluminum tube that holds the cesium capsule. 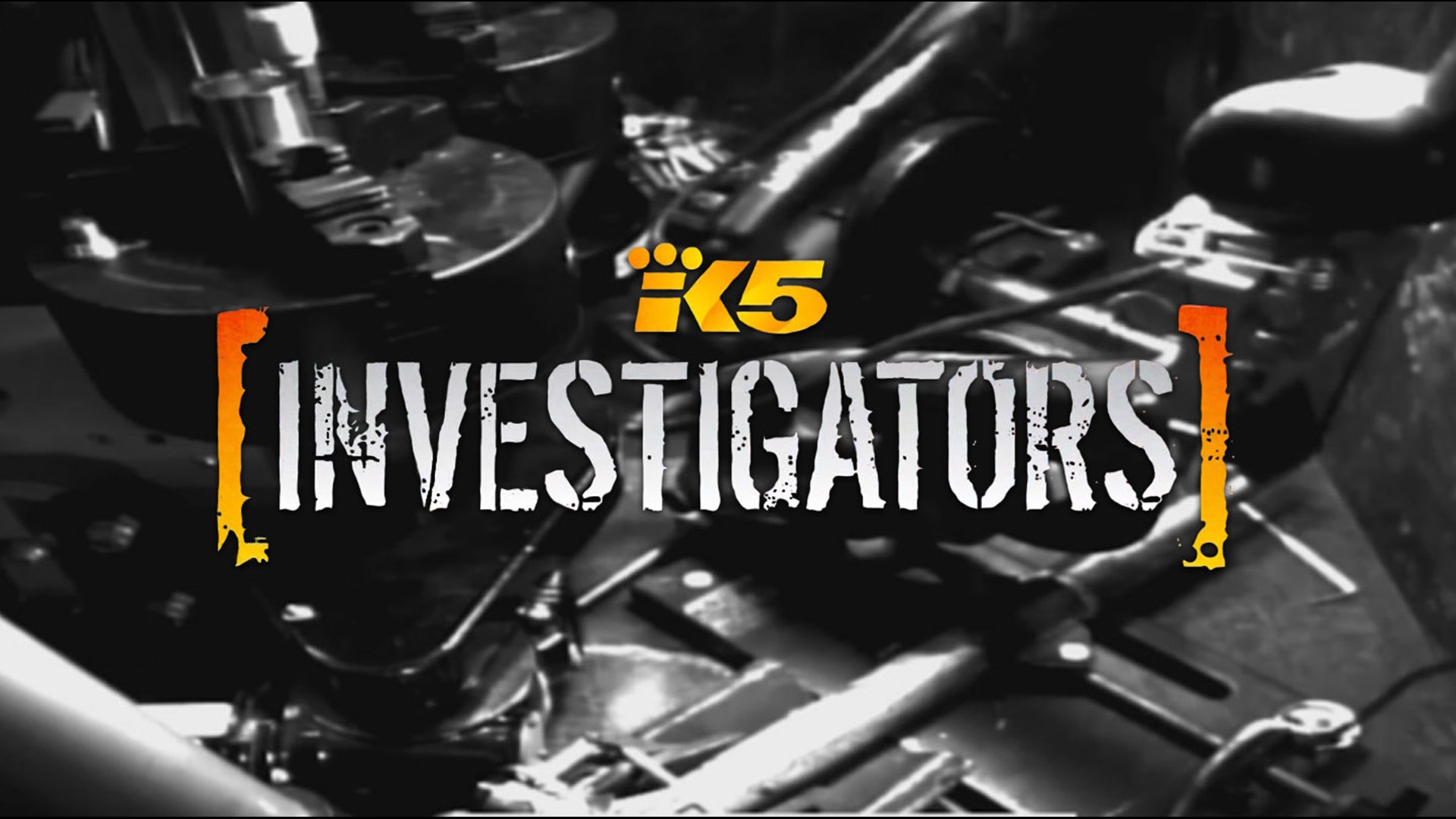 The cutting operation happened inside a mobile hot cell device, a lead box, staged on a loading dock at the Harborview Research and Training building. The contractors are outside the box, protected from radiation, operating robotic arms that hold the tools and the capsule. They view the operation through a live feed from video cameras mounted inside the mobile hot cell. 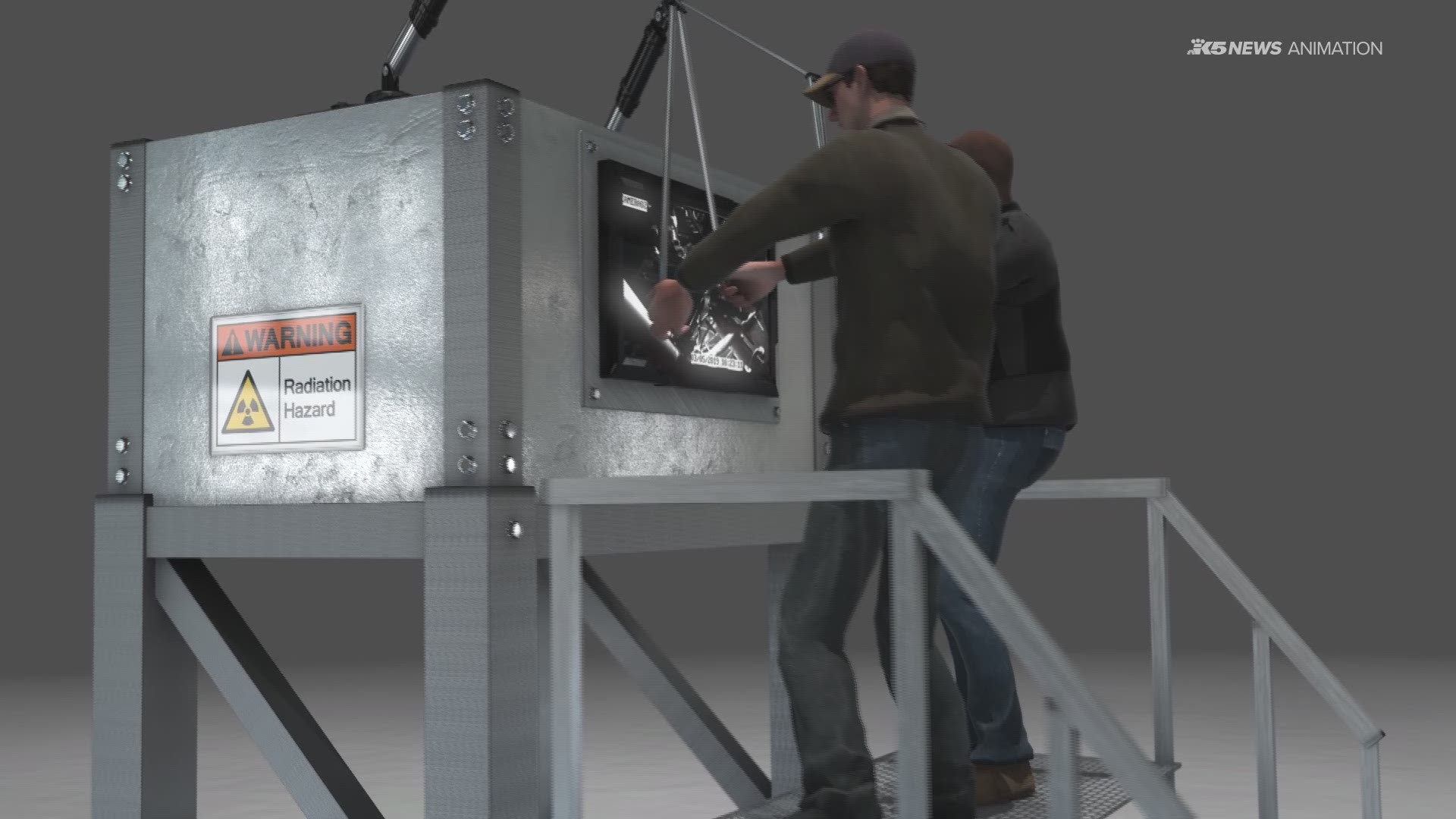 The video shows the International Isotopes contractors attempting to unscrew the tube that holds the cesium capsule from another piece of pipe that holds it in place inside the irradiator.

When that attempt fails, the contractor inexplicably tries to separate the pipes with the electric cutter which was not permitted and “…should not have been allowed,” according to federal investigators.

Investigators say there was no reason to separate the pipes at all because they could have been properly packaged for safe transport and both disposed of together.

During the cutting operation, the saw pierced the cesium capsule releasing radiation into the mobile hot cell.  The contractor apparently did not recognize the telltale “bright spots” and breakup of the video feed as evidence that radiation was leaking out of the capsule. The contractor also did not have radiation detection devices on hand.

When radiation was detected later “it pegged on the highest scale” on a contamination survey meeting, according to the federal report.

The report says more than an hour passed before the International Isotopes team recognized the problem, and more than four hours before a police officer there on security detail called 911.

By then, radiation had escaped the mobile hot cell device and made its way into the ventilation system and contaminated several parts of the Harborview Research and Training building.

International Isotopes CEO Steve Laflin did not respond to emails and phone calls requesting an interview.

Kamen, the radiation expert from New York, says only a small fraction of the 2,900 curie of Cesium in the capsule leaked.

But the Seattle incident shows how much damage even a small amount of radioactive material can cause.

“So just imagine if a tiny fraction can do such contamination in a building for a year – what would it do if it’s used by someone with malicious purposes in downtown Seattle?  Just imagine how bad it would be,” Kamen said.

Kamen says cesium could be used as a “weapon of mass disruption.” It would not necessarily result in a large body count, but it could contaminate city blocks and shut down the economic engine – much like coronavirus is doing now.

Kamen is one of the leading voices calling for the disposal of medical devices – like irradiators – from low security facilities across America.

As the radiation officer at his institution Mount Sinai Health Systems, he has directed the disposal of four irradiators and replaced them with x-ray machines to cleanse blood and other medical necessities.

After 9/11, New York medical and research facilities became concerned about terrorists staking out their irradiators for their cesium content – a possible ingredient for a “dirty bomb.”

Kamen helped convince the DOE and other agencies to invest in disposing of irradiators at medical facilities nationwide and replacing them with x-ray machines.

“Since 2009 NNSA has removed 350 cesium irradiators from across the country without any contamination as part of this important national security work,” Wolf said.

Ironically, the Harborview leak was part of the federal program to safely dispose of irradiators.

Thirteen people, including an FBI agent observing the cesium removal, were contaminated during the May 2019 leak.  A University of Washington spokesperson says none of them had lasting injuries.

The Harborview Research and Training Building remains closed during a cleanup that is nearing $9 million. Research projects that could be salvaged and medical training have been transferred to other locations.

Seattle Mayor Jenny Durkan agrees with NNSA’s assessment that the area around Harborview is safe from radiation.

“Based on the information we have, there is no risk to the public that is in and around Harborview,” Durkan said.

Durkan, the former United States attorney in western Washington, said the removal of these devices is important for national security purposes. 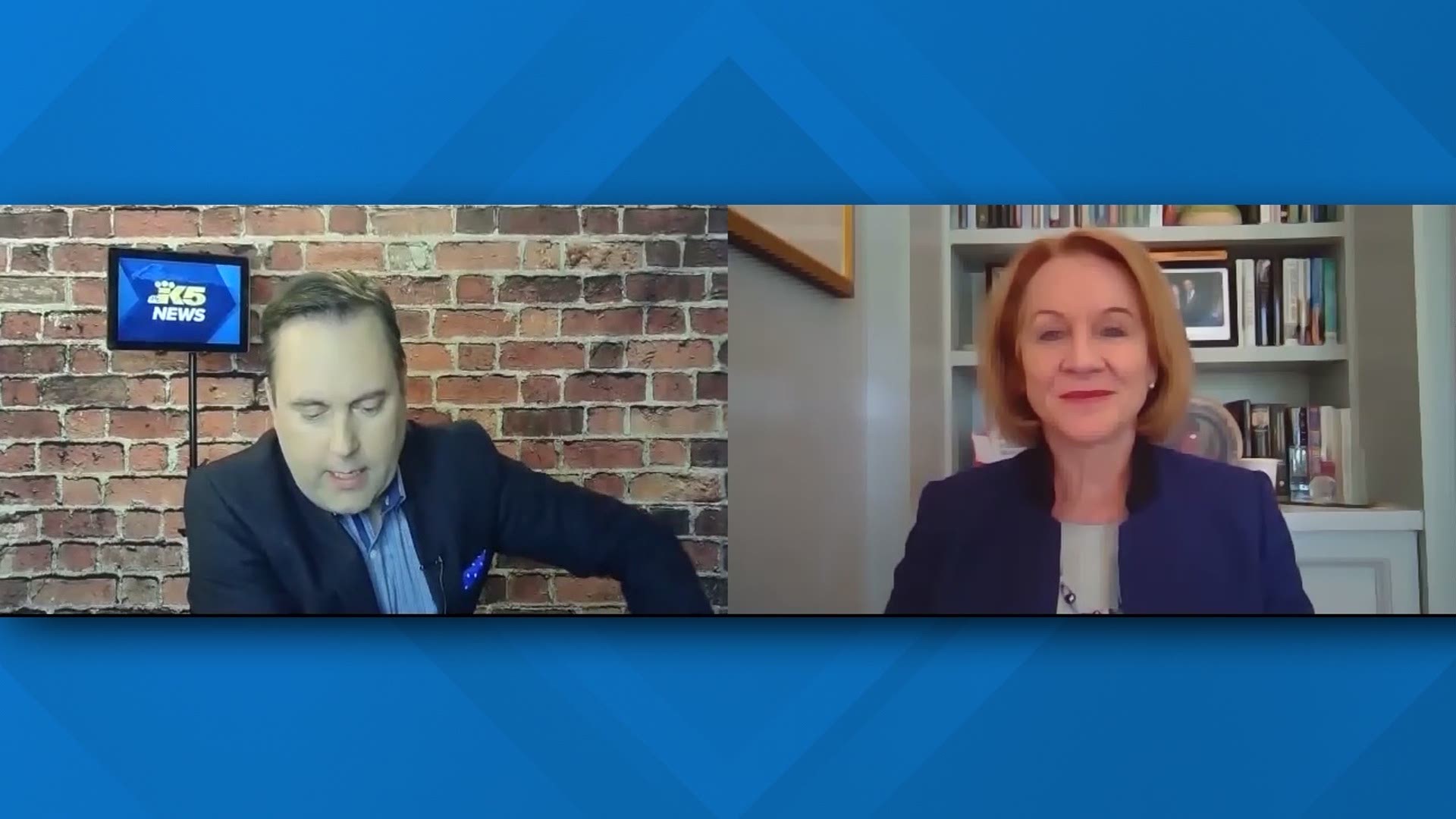 The DOE says the Seattle leak resulted in numerous changes to the oversight of projects at medical and research facilities.