Seattle's Skagit hydropower project is the largest Green Certified project in the country. Stakeholders say the city gained the designation with bogus claims. 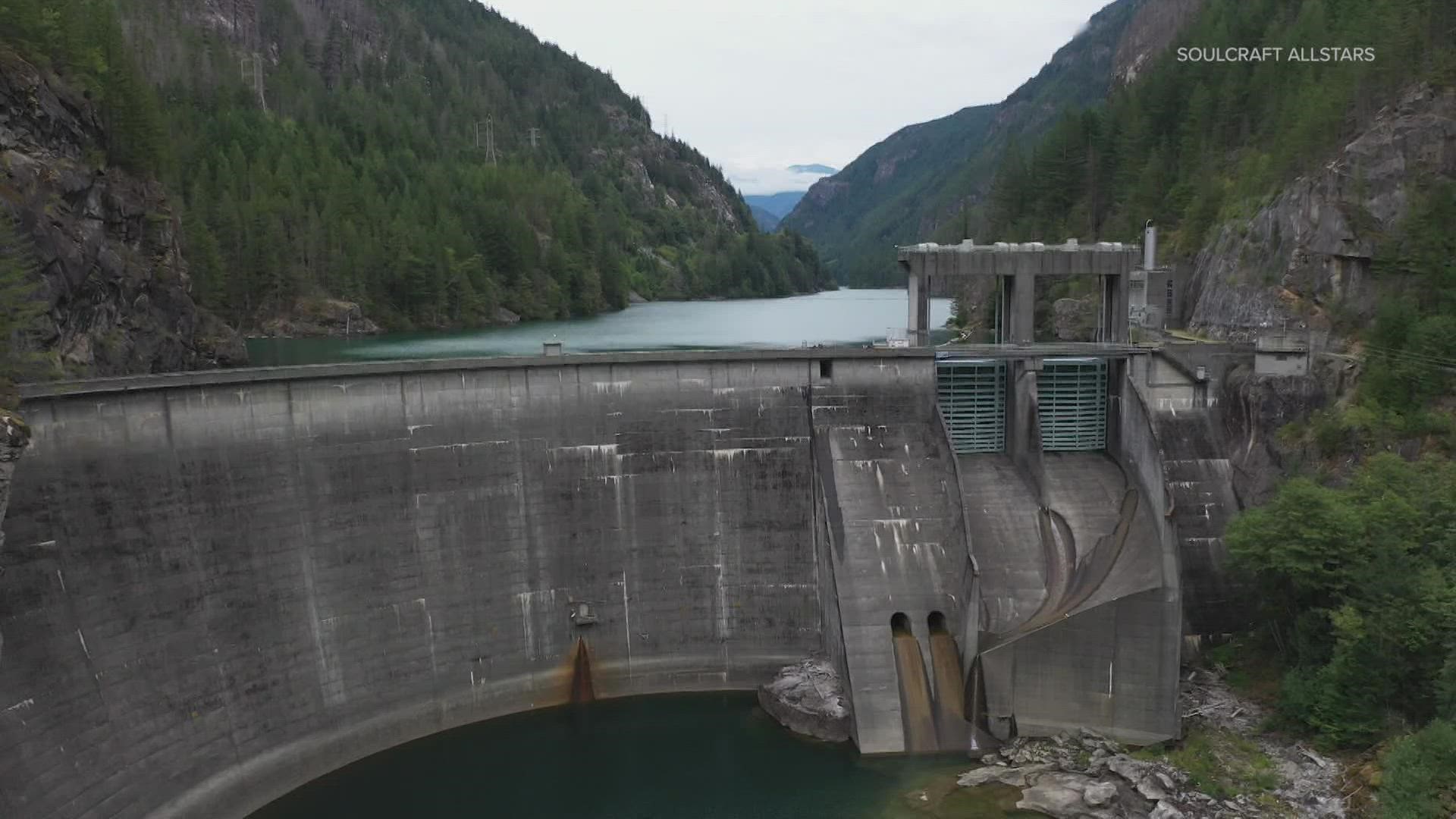 For 100 years, Seattle has generated carbon-free electricity from three dams on the Skagit River.

LIHI is a Massachusetts-based non-profit that defines itself as “the leading non-profit, independent, third-party source to verify the green claims of hydroelectric power suppliers.”

City Light first gained Green Certification in 2003 and was granted re-certification from LIHI in 2008 and 2017. Of LIHI’s 164 certified projects in 23 states, Seattle’s Skagit Project is the largest in the country.

“(LIHI Certification) is a pretty high bar and we take it seriously,” said Chris Townsend, director of natural resources and hydro licensing at Seattle City Light. “We hope to maintain that (certification) and be a leader for the rest of the country.”

To be certified “green,” LIHI has a set of eight criteria the applicant must meet. They include “safe, timely and effective” upstream and downstream fish passage. That means infrastructure to move fish through or around dams to access habitat and “successfully complete their life cycles and maintain healthy populations in areas affected by the facility.”

Lack of fish passage around dams

Seattle’s dams don’t meet that mark. The city has never invested in fish passage. According to tribal and government biologists in the Pacific Northwest, the Skagit dams cut off nearly 40% of river habitat to salmon species that state data shows are all in decline. In turn, Native American Tribes say that hurts their ways of life and threatens their treaty rights. Three of the salmon species, sacred to the Tribes, have landed on the Endangered Species List: bull trout, steelhead, and Chinook salmon. When the government puts a species on this list, it means it is at high risk of extinction.

How did Seattle City Light’s Skagit Project become an eco-friendly all-star without providing fish passage? The utility submitted science to LIHI that showed fish passage wasn’t necessary because historically, salmon were never physically able to swim up to the location of the dams anyway.

Research cited in applications to LIHI showed that below Gorge Dam, a 2.7 mile stretch of the river known as the Gorge Bypass Reach features huge boulders and steep falls too difficult for anadromous fish to swim past. Anadromous fish are born in freshwater, spend most of their lives in ocean waters, then return to rivers to spawn.

“The Skagit River gorge downstream of Gorge Dam marks the historical limit of anadromous salmon migrations in the upper river,” wrote authors of City Light’s 2017 re-certification application. “The Gorge Bypass Reach of the Skagit River, which is located immediately above Gorge Powerhouse, is a steep and narrow canyon that is a natural barrier to the upstream passage of all salmon species present in the river.”

In 2002, City Light submitted its original application to LIHI with similar statements.

“The Gorge Reach of the Skagit River, which is located immediately above Gorge Powerhouse, is a steep and narrow canyon that is a natural barrier to the upstream passage of all salmon species present in the river,” wrote City Light authors in 2002. “(There is) excellent evidence that the project facility and project operations do not negatively affect Chinook salmon and other salmon species downstream of the (hydroelectric) project.”

In the applications, City Light said on occasion, powerful steelhead swimmers could have been the exception.

“Historic records indicate that a few steelhead trout may have occasionally migrated upstream through the narrow gorge under certain flow conditions to Stetattle Creek, which is about two miles above Gorge Dam,” wrote City Light authors in the 2017 re-application.

The authors go on to dismiss this conclusion by citing genetics studies conducted by Seattle City Light.

“(Genetic studies) support the hypothesis that steelhead have not been able to access this portion of the river in recent geologic time.”

In 2003, City Light also dismissed the idea that steelhead may have historically migrated upstream through the Gorge Bypass.

“Due to extremely high velocities and turbulent conditions, successful spawning, incubation, and juvenile rearing of steelhead is highly unlikely in this reach.”

Historic records of steelhead sightings in the Gorge caught the eye of the original application reviewer hired by LIHI in 2003. The environmental consultant firm Stillwater Sciences recommended to LIHI that Seattle not gain Green Certification because of the lack of fish passage. The executive director at the time recommended to the board that they discount their own experts’ findings.

“I think the record we’re presented with is that this area was, at the very best, marginal habitat for some steelhead that could sometimes migrate up the Stetattle Creek to spawn. This was not an area that provided habitat for multiple salmon or steelhead runs,” wrote Lydia Grimm in 2003. “The Governing Board should certify the Skagit project….as Low Impact.”

Biologists of Skagit Valley Tribes and government resource agencies don’t believe Seattle’s natural fish barrier theory that led to its Green Certifications. In public documents, the scientists wrote the landscape of the Gorge Bypass would not be too difficult for salmon to navigate.

“That would be like saying it never rains here in Seattle,” said Robert Howard, the general manager of the Suak-Suiattle Indian Tribe located in the Skagit Valley. In September, the Tribe filed a lawsuit against Seattle accusing it of “greenwashing” its Skagit Hydroelectric Project.

“Even though we are so small, just about 300 (members), we’re mighty in nature, enough so to stand up to the big bully in the playground,” Howard said.

In the three LIHI applications, Seattle City Light referenced the alleged natural fish barriers below Gorge Dam 54 times. The utility leaned on information gathered by two University of Washington scientists from 1921. Seattle did not highlight to LIHI cautionary language featured on the first page of the 1921 report:

“The survey must be considered as superficial. It would take very much more time than was spent to make anything like a thorough investigation of the waters covered,” wrote the UW researchers.

“It was just totally illogical that they would say that there were no fish up there,” said Skagit County Commissioner Peter Browning. “We were a little outraged because the (LIHI) certification clearly meant a lot to them, but they have to be honest. And in this case, they weren’t being.”

The belief that Seattle’s dams don’t harm fish is a long-standing narrative at Seattle City Light. One former City Light executive who worked at the utility from 1978 to 1993 said no one questioned the conclusion that there was historically no way for fish to make it through the Gorge Bypass.

“The prevailing wisdom was that there was never any passage above the area where Gorge Dam was built. People were not even debating it. It wasn’t on the table,” said Sara Patton, former City Light manager of conservation policy and planning.

Townsend, the current City Light executive, said the utility has never meant to deceive LIHI or anyone else.

“We stated what we knew to be true,” Townsend said. “Just because it’s a different river now or we have different ways of understanding what the truth is doesn’t mean that we were untruthful previously. It means we did the best job we could with the information we had. And that’s why it’s so important to do the science we’re doing now.”

“(City Light) suggests that the Project has had limited effects on upstream passage of anadromous fishes, including (endangered) salmonids….(but) numerous observations from state, federal and tribal representatives have documented multiple species and life history stages of salmon and steelhead at the base of Gorge Dam, suggesting no such barrier exists,” wrote NOAA Fisheries biologists.

“(The National Park Service) has surveyed the Bypass Reach…and not found any evidence of a fish passage barrier between the Gorge Powerhouse and Gorge Dam using the best available science and accepted methods established by Washington Department of Fish and Wildlife,” wrote National Park Service (NPS) biologists.

In 2016, the Tribe and NPS found what they identified as a steelhead above the alleged barriers. A City Light biologist was present as well. The Upper Skagit biologists said, at first, the City Light scientist agreed it was a steelhead, but later changed course and called it a “Rainbow Trout,” which is resident fish you would expect in the area.

“If you have definitive proof of a fish above, it means there’s no barrier,” said Jon-Paul Shannahan, the managing biologist for the Upper Skagit Indian Tribe for 17 years.

In April of this year, the NPS and the Washington Department of Fish and Wildlife (WDFW) made a discovery that biologists consider a game-changer: a school of approximately 50 tiny fish they believed were coho salmon. Coho are some of the weaker swimmers in the Skagit, but they were found in a location that City Light’s LIHI applications said the adult fish couldn’t swim to or spawn in.

To make certain, samples were sent to the WDFW Molecular Genetics Laboratory in Olympia for DNA testing. On May 5, 2021, the analysis came back confirming the discovery of Oncorhynchus kisutch (coho).

“It was a great day,” Shannahan said. “It validated the older science that we’ve shared. As scientists, we knew. But we needed that little bit of proof, that observation to convince (Seattle City Light).”

Current LIHI leadership said they’ve been watching with interest the KING 5 investigation “Skagit: River of Light and Loss,” and that as new information comes out, they could change the certification status of the Skagit Project.

“As soon as new reports and new studies come out, we’ll review those to ensure that the project continues to meet our criteria and if they don’t, then we’ll make a decision to either ask the project to remedy the situation or we can suspend or revoke the certification,” said Shannon Ames, LIHI executive director. “We take every stakeholder very seriously and all of the comments that come into us very seriously.”

The LIHI executive director said stakeholder input is an important part of the certification process. In the last recertification in 2017, most of the involved groups issued positive comments about City Light’s operations, in favor of the Green Recertification.

“Seattle City Light has been an excellent steward of the Skagit Watershed’s many natural and cultural resources, and an unwavering partner in our Council’s varied efforts to preserve habitat for sustainable fisheries,” wrote Richard Brocksmith, executive director of the Skagit Watershed Council. In the submission, Brocksmith wrote that the Watershed Council receives financial support from City Light.

The Upper Skagit Indian Tribe disagreed. They were the only group to conclude City Light should not continue with the green designation.

“In my opinion, the applicant has not met all the recommendations for protecting fish, and are not currently operating in a manner that protects fishery resources," wrote Shannahan, the then-managing biologist for the Tribe. “(A) fundamental issue supporting my response, is the continued promotion (by City Light) that the (dams) are upstream of the natural anadromous barrier – which is erroneous.”

Now other stakeholders, including Trout Unlimited, American Whitewater, Skagit County government, and the Sauk-Suiattle Indian Tribe, side with the Upper Skagit Indian Tribe. They said they will not support Seattle’s next Green re-certification unless acceptable fish passage is well on its way to reality.

“Make power, good for you Seattle. But this is not the right way to do business,” Commissioner Browning said. “We need our salmon back. Seattle, you’re better than this.”

The current Green Certification expires in 2026, but LIHI officials said they could make a recertification decision earlier, depending on what resource agencies recommend.

City Light’s Townsend said the utility will most likely be making fish passage commitments prior to the next Green Recertification.

“By that point, we should be making progress towards implementing those commitments,” Townsend said. “And if we’re dragging our feet, then no, we shouldn’t be recertified.”