Former neo-Nazi to KING 5 reporter he targeted: 'I just want to apologize'

21-year-old Johnny Roman Garza is looking to atone for what he did as a member of the Atomwaffen Division. 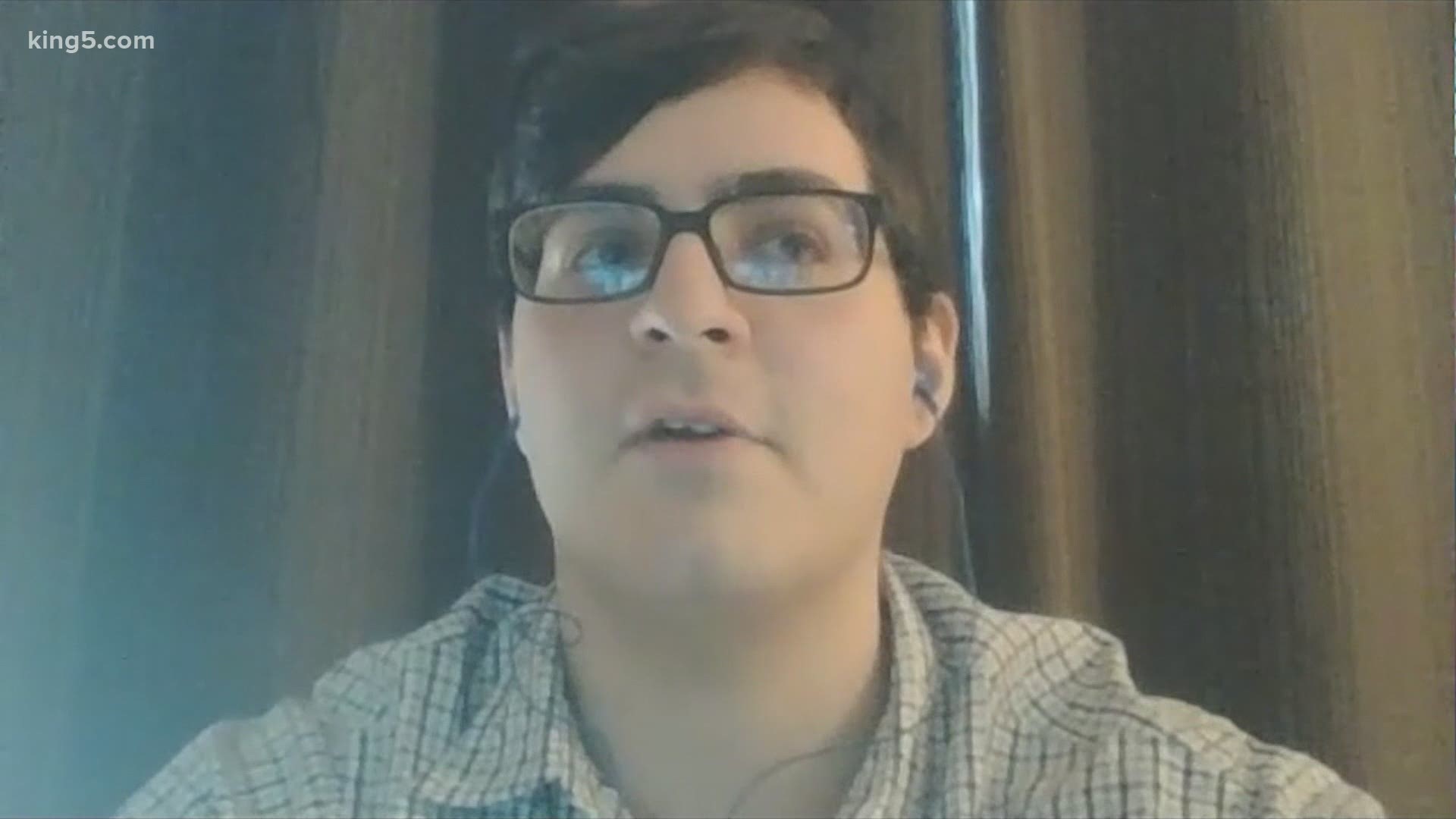 A former member of the Atomwaffen Division, a neo-Nazi group that threatened journalists and persons of color in Washington state and across the country, has a message before he reports to federal prison later this month.

“I just want to apologize,” said 21-year-old Johnny Roman Garza from his parent’s home outside of Phoenix, Arizona.

Garza made his apology during a Zoom interview with KING 5’s Chris Ingalls, one of the victims of what the FBI says was a conspiracy to threaten and cyberstalk persons of color and journalists who reported on the group’s activities.

“It’s simply just evil and I didn’t realize how evil it was, you know?  Professing to be wise, I was actually a fool,” Garza said.

Last month, Garza was sentenced to 16 months in federal prison for putting a threatening poster up on the home of the editor of a prominent Jewish newspaper in Arizona and attempting to do the same thing at the home of a Black reporter.

The poster depicted a figure in a skull mask holding a Molotov cocktail in front of a burning home. The poster included the victim’s name and address and said, “Your actions have consequences … you have been visited by your local Nazis.”

In encrypted chats intercepted by the FBI, Garza told at least three other Atomwaffen participants the plot was to “… have them all wake up one morning and find themselves terrorized by targeted propaganda,” according to court documents.

Garza revealed insights into how a sinister group such as Atomwaffen pulls what he calls “despondent” young people into its grip.

Garza, who is now 21, is a “…troubled man with a chaotic home life,” according to documents filed in court by federal lawyers in Seattle who are prosecuting the case. Records say Garza grew up in a lonely environment, without much of a formal education.

That left him primed for recruitment by a hate group such as Atomwaffen.

“(They) kind of made me feel like they were my only friends, that was where I belonged,” Garza said of the period less than two years ago when he first started chatting online with Atomwaffen leaders.

They talked about crime statistics in which whites were victimized, their twisted views of science and other racially charged topics.

“I was completely cut off (from my family).  My heart was darkened. I really just wasn’t even thinking that far ahead.  I was kind of concerned with me, myself and I,” Garza said.

He added that drug use and an undiagnosed mental illness (court records say he was recently diagnosed bi-polar) distorted his logic.

The FBI has identified Atomwaffen as a violent extremist group, with possible connections to other extremist organizations overseas.  Atomwaffen (German for “nuclear weapon”) follows the teachings of Adolf Hitler and US mass-murderer Charles Manson who convinced his followers in the 1960’s to kill in the hopes of sparking a race war.

“That’s what they think will happen is that the country will just collapse, and it will turn into this post-apocalyptic thing,” Garza said.

Atomwaffen members have been charged or convicted of five murders nationwide.  In one case in 2017, a mentally ill Atomwaffen member killed two other members claiming that they disrespected him, according to police reports.

Another member is in prison in Florida for a failed bomb plot.

Court documents say 25-year-old Kaleb Cole of Snohomish county and Brandon Shae, 24, of Redmond were two Atomwaffen leaders who organized the conspiracy to threaten journalists and minorities.  Both pleaded “not guilty” to federal charges and are awaiting trial.

In addition to Garza’s plea and sentencing, Taylor Parker-Dipeppe of Florida already admitted to his part in the conspiracy and is awaiting sentencing.

Garza says he never knew any of the true identities of the Atomwaffen members with whom he conspired.

“I didn’t know anything about them.  I mean, I knew them by screen names,” Garza said.

The KING 5 Investigators have reported extensively since 2019 on Atomwaffen’s presence in Washington state, and the weapons cache that local authorities seized from Kaleb Cole in Arlington.

Garza says he never took part in any hate camps and he did not own a gun.

KING 5’s Chris Ingalls received a threatening poster in the mail in January of 2020, which was allegedly sent by Shae as part of the conspiracy.  Ingalls was tipped just prior to that by the FBI that Atomwaffen was planning a visit to his home.  He and his family left his home for a short period while the Joint Terrorism Task Force surveilled his residence.  No one showed on the appointed weekend, but the threatening letter arrived in the mail a few days later.

“I know that you, yourself, Chris were one of the victims,” Garza said during his interview with Ingalls.  “I want to apologize for that, too, because technically with the conspiracy I’m culpable for it,” he said.

Garza also apologized to the journalists in Arizona whom he personally targeted.

One of them was Mala Blomquist, editor of Arizona Jewish Life, who told KING 5 she’s “…torn between wanting him to be punished and giving him a second chance.”

Garza glued a threatening poster to the window of her home.

“Garza really seems to understand the depth of what he has done.  I think he is remorseful,” she said.

Blomquist, who is not Jewish, said the sad reality of managing a Jewish newspaper is that staff is subjected to racist comments and threats routinely.

Garza insists that he never had a burning hatred for any minority group, but he says his experience with Atomwaffen did “desensitize” him to other races and cultures.

“That’s kind of the strangeness with blatant just racism.  It’s kind of looking at someone only for their race instead of a complete person,” he said.

Garza says his arrest last February and a subsequent stint in jail shook him free from Atomwaffen’s grip.  He says he is living a more stable life and has turned to reading the Bible.

He consented to an interview with KING 5 as part of his attempt to atone for his bad behavior.

“I see how wrong that I was. It’s really hard to explain yourself after the fact,” he said.  “But I’m serving my sentence, so that’s all I can say.”

Garza begins serving his 16 months in mid-January and has already reached out to the anti-Defamation league and other advocacy groups to see if he can provide helpful insight on white supremacist groups.

He has also offered his services to federal authorities “…to offer to assist law enforcement in helping to attack the recruitment tools of similar groups in the future,” according to court records.