It's at least the second time in two years that police investigated players on Eastside Catholic's powerhouse football team for allegations of serious crimes. 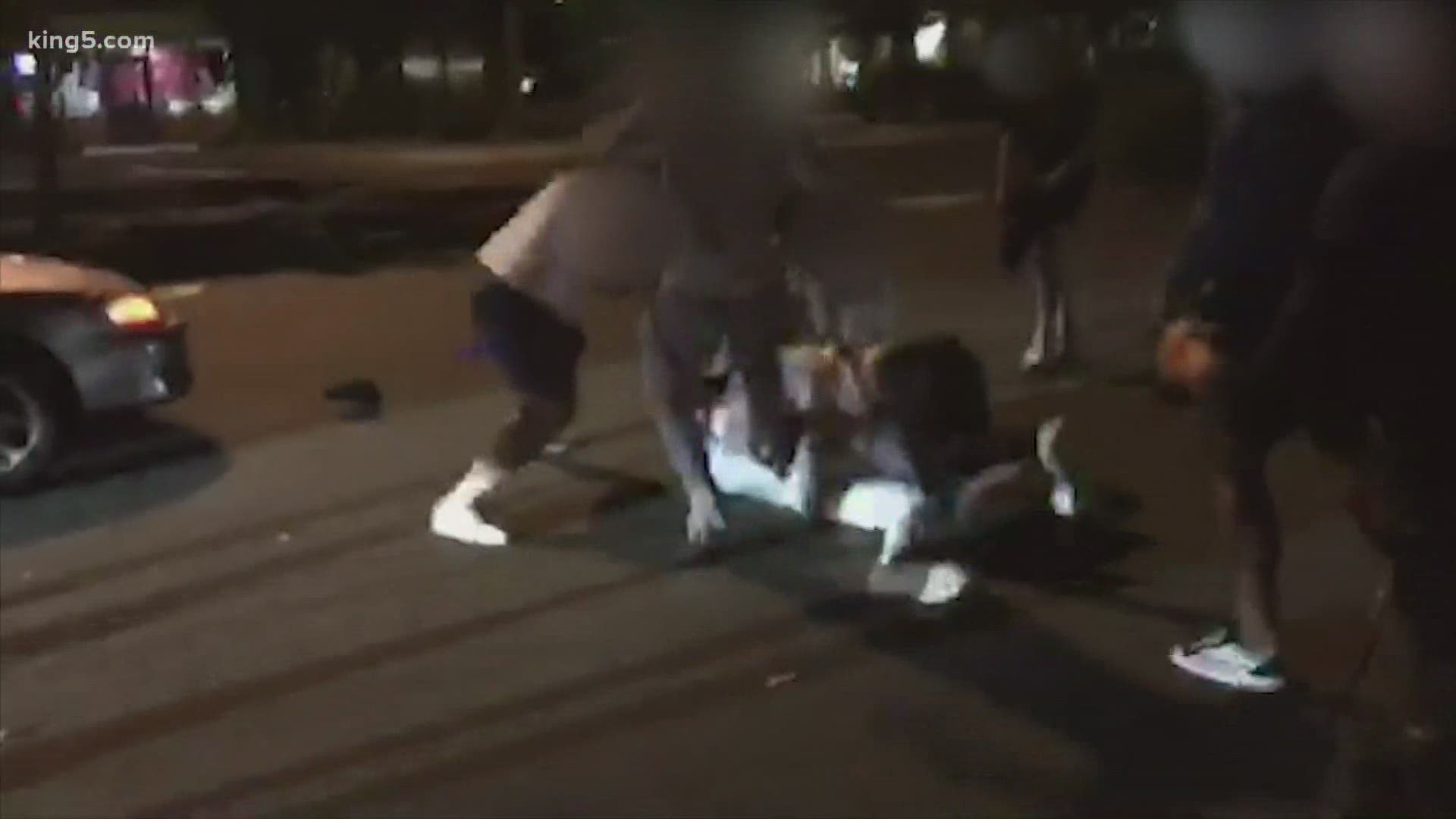 SAMMAMISH, Wash. — On the heels of a 2018 criminal sexual assault investigation involving four Eastside Catholic High School football stars, in 2019, three other athletes on the state championship-winning team were suspects in a different criminal investigation related to a violent altercation outside of a Sammamish grocery store.

Law enforcement records reveal the three Eastside Catholic athletes and another football player from Eastlake High School in the Lake Washington School District were accused of “recklessly and intentionally” assaulting three teenage boys in a Sammamish Safeway parking lot on August 23, 2019, while 50 to 75 juveniles clustered around them and a handful of concerned adult bystanders called 911. A witness reported to cops that “half the Eastside Catholic football team” was in the crowd that night, according to a police report.

This is at least the second time in two years that law enforcement investigated members of the Eastside Catholic powerhouse football team for allegations of serious crimes. The private school’s elite football team is considered one of the best in Washington state — if not the country. The school has won the 3-A state champion trophy four times in the last six years, and its athletes have a track record of landing college scholarships to play Division I football for prestigious universities.

KING 5 is not publishing the names of the football players who were under criminal investigation for the alleged 2019 assault because in each of their cases, prosecutors either declined to file criminal charges or dismissed their criminal case.

Cell phone videos, obtained by KING 5, captured portions of the violent brawl and the chaotic scene in the parking lot. The videos show a group of males throwing punches, kicking and stomping on at least two different boys on the ground while others in the crowd attempt to break up the back-to-back fights. The males involved include not only Eastside Catholic and Eastlake High School students, but also students from school districts across the Bellevue and Issaquah areas. It’s unclear why law enforcement didn't also investigate the other students seen engaging in the fight.

At least one of the three alleged victims sought medical care at the hospital after the incident, reportedly suffering from a concussion and bruised ribs, according to police.

Four days after the incident, a parent of one of the alleged victims provided copies of the videos to a King County Sheriff's Office detective, according to e-mails the parent shared with KING 5. The parent informed the detective that his son and another teen who said he was assaulted wanted to press charges against the Eastside Catholic and Eastlake High School athletes. But, e-mails show, police didn't follow up with the family or interview the alleged victims who sought to press charges until two months later.

In October 2019, the King County Sheriff’s Office opened an investigation, and the agency’s Sammamish detective analyzed the video clips. She documented in her police report that one of the Eastside Catholic football players appeared to put one of the alleged victims in a “choke hold,” wearing “a smirk or a grin on his face” during the encounter. She said the video showed the same football player and another Eastside Catholic star “violently” kicking another one of the boys in the head and torso.

The edited video clip below shows a portion of the parking lot brawl. KING 5 blurred the students' faces and distorted parts of the audio that identifies people by name.

“I received and reviewed the video of the incident and immediately concluded the level of violence used against (two of the alleged victims) was excessive under the circumstances and was much more than a mutual simple assault,” wrote Jennifer Herr, the lead detective on the case.

Others who reviewed the videos did not interpret the events the same way. An attorney for one of the football players investigated in the case said her client didn’t put the teenager in a choke hold; he was trying to pull a fellow student away to de-escalate the fight. The same attorney, plus a parent of another football player involved, criticized the thoroughness of the police investigation, stating police did not interview any of the football players under investigation— only the alleged victims. The third Eastside Catholic player and the Eastlake High School student involved in the case couldn’t be reached on Tuesday for comment.

After completing a two-month investigation in December of this year, the King County Sheriff’s Office referred the case to city and county prosecutors. Cops recommended two of the Eastside Catholic players be charged with second degree felony assault, and the third Eastside Catholic student under investigation should be charged with misdemeanor assault in the four degree, according to police and prosecutorial records.

Police also thought the Eastlake High School student should be charged with misdemeanor assault, according to their investigation file, but a King County Prosecutor’s Office spokesman said the office never received the paperwork on that juvenile.

County prosecutors declined to file second degree assault charges against the two teens police referred to their office. In February of this year, a Sammamish city prosecuting attorney charged the third Eastside Catholic player with fourth degree assault, but a month later, the prosecutor dismissed the case.

“We commend Sammamish Police on their thorough and fair investigation,” said Casey McNerthney, a King County Prosecutor’s Office spokesman. ”This was not a question of their work, rather the totality of evidence that would be presented in court.”

Eastside Catholic school officials said they knew four of their star football players were under criminal investigation for an alleged sexual assault in 2018.  But a school spokeswoman said top brass didn’t have a clue about the Safeway assault accusations until reporters brought it to their attention this week.

“The fighting behavior (KING 5) described is not acceptable or aligned with our values,” wrote Karen Hatch, an Eastside Catholic spokeswoman in a statement Tuesday. “We are deeply dismayed and concerned, both by the behavior itself, and that this information is only now coming to light.”

The private school has faced criticism in the past for failing to hold football players accountable for breaking school rules. Eastside Catholic never opened an internal investigation when four of its football stars were accused in 2018 of sexually assaulting a 16-year-old girl in the bed of a moving pickup truck on public roads.

The school’s 67-page code of conduct spells out expectations for all students, including athletes. It reminds students that being an athlete is “not a right, but a privilege,” and it threatens academic suspension or dismissal from extracurricular activities if student-athletes don’t “display exemplary behavior.”

After reporters asked school officials questions about the 2019 altercation, the school’s president sent a letter to the entire Eastside Catholic community Tuesday, in which he called out poor behavior.

“We expect all of our students to treat everyone they come into contact with respect for human dignity,” Eastside Catholic President Gil Piccioto wrote in the letter obtained by KING 5.

He added that he was “deeply dismayed and concerned” that the school only learned about the summer 2019 brawl nine months after it took place.

“It is clear that our communications processes have failed, and that we need to take a hard look at why we were not aware of this sooner,” he wrote. “It is also clear that we need to recommit ourselves to aligning the culture of our school, including all school programs, with our values.”

The president laid out a plan of action moving forward.

“Effective immediately, we have retained a consulting agency to assist us in independently and objectively evaluating our processes, identifying gaps and implementing changes,” Piccioto wrote.  “We are absolutely committed to ensuring that the culture of every department, every program, every student and every faculty and staff member is aligned with our values. As a faith-based institution, our community must live our values in words, deeds and spirit and you have my solemn commitment to make it so.”

A Lake Washington School District spokeswoman said they were not aware of the Safeway brawl until KING 5 brought it to their attention. She declined to comment on the status of the Eastlake High School student who was under investigation in the assault case.