Pierce County Drainage District No. 23, which has not been audited since 2003, has $1.3 million in tax money sitting in a county fund. 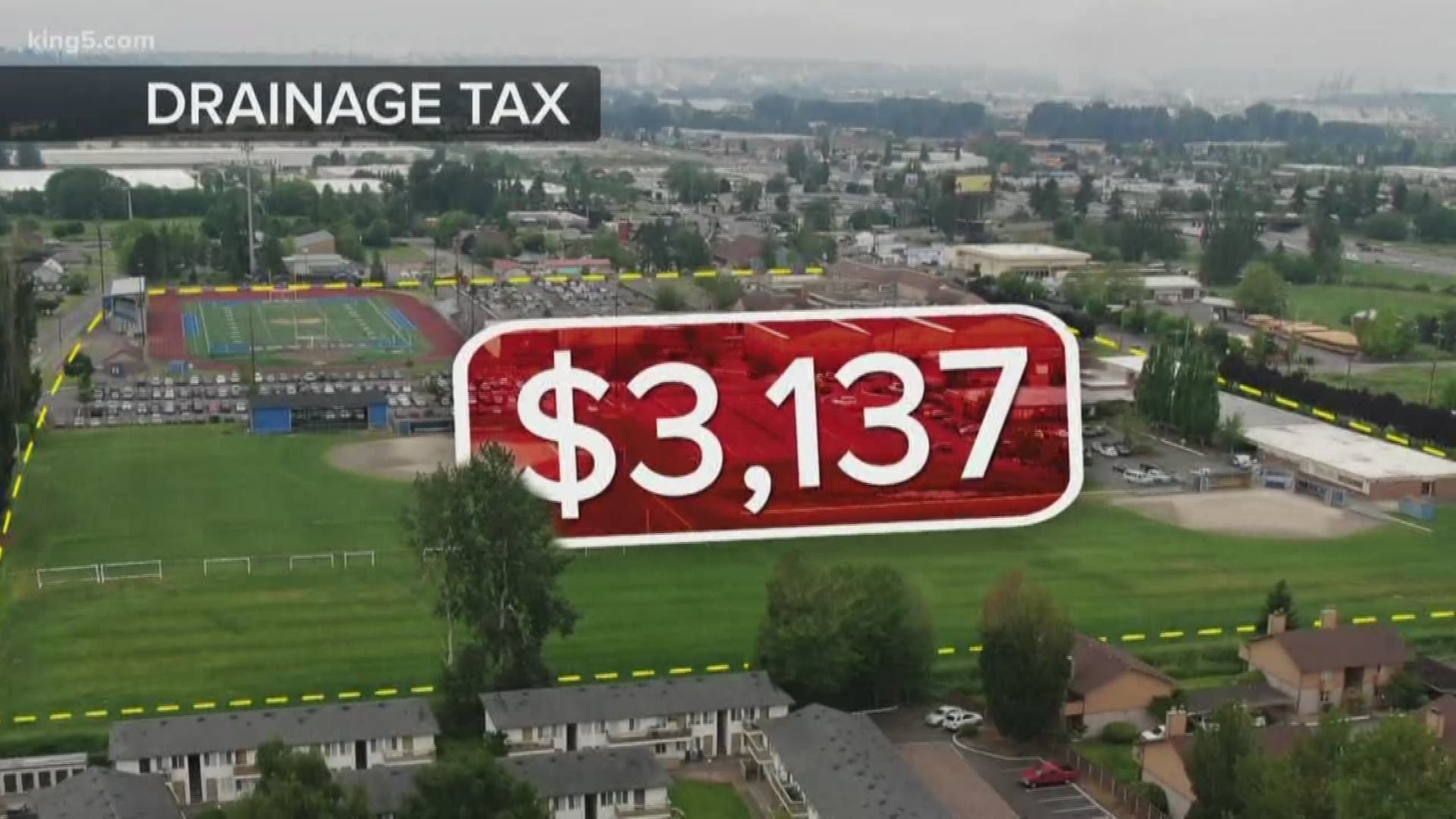 A small government commission in Pierce County is sitting on a growing pile of tax money – $1.3 million  – even though the public drainage system it is supposed to maintain is getting smaller and smaller.

What Pierce County Drainage District No. 23 is doing with the $180,000 in taxes it collects yearly from about a thousand property owners in Fife is uncertain.

The three elected commissioners who run the decades-old storm water drainage system have refused to provide the district’s financial records – as required by law – to the Washington State Auditor’s Office.

Pierce County Drainage District No. 23 was last audited 16 years ago.

It’s one of 10 governments in Washington that has not been audited since 2003, according to a recent state report. That same report says an average of 130 governments miss their deadlines to submit financial records every year.

The lack of action by other government agencies to enforce the auditing rules raises more questions about the accountability of the patchwork of “special purpose districts” in Washington.

There are more than 1,600 special purpose districts in Washington, including Pierce County Drainage District No. 23.

“We are using (taxpayer) money the best we can,” said longtime Drainage District No. 23 Commissioner Max Jaquez.

First elected in 1974, Jaquez is likely one of the longest-serving elected officials in all of Washington.

“That’s a bunch of bull. I’ll tell them right off,” Jaquez of the Washington auditor’s inability to scrutinize his drainage district.

“We are governed by the county. They verify, and they’re the ones that write the checks,” Jaquez said. “If the (state auditor) wants to audit, they should go to the county. Don’t blame somebody else for not getting it.”

The taxes collected are held by the Pierce County Budget and Finance Department, which maintains the current $1.3 million cash balance for the district.

However, the law states that the three district commissioners have oversight of that money – not the county government.

“As long as (the proper paperwork) procedures are being followed the actual use of those funds is not being audited by Pierce County,” said Pierce County Assessor Mike Lonergan.

“We have zero oversight of operations (and) finance of these districts,” added Pierce County Auditor Julie Anderson.

That duty is left to the Washington State Auditor.

However, the Drainage District No. 23 Commissioner who is signing off on almost all of the expenditures isn’t answering the auditor’s questions.

Records show that retired bus driver David Lamberson signs for most of the expenses incurred by Drainage District No. 23. It’s unclear when Lamberson was first elected to the drainage commission, but Jaquez says it was more than 10 years ago.

Lamberson did not respond to multiple attempts to contact him by phone and through social media. A KING 5 reporter also visited his home and left a written note.

Records from the Washington State Auditors Office show that he has not responded to years of written demands delivered to his home in Fife to submit district financial records for a required audit.

Many of Drainage District 23’s expenses are paid out by the county’s finance department on his signature alone. Bare bones expense reports submitted to the county show Lamberson signed for payments for grass cutting, electricity bills and maintenance for a small pumphouse that the district operates.

District 23 is an 83-year-old trench system that drains stormwater from what used to be the rural area around Fife and Milton.

The commissioners oversee maintenance of the trench system which – according to Jaquez – mostly means cutting grass and caring for the pumphouse that sits along the Hylebos Creek near the Port of Tacoma.

Many of the trenches have been covered up over the decades by the development of neighborhoods, commercial buildings and industrial parks.

Once a drainage trench is replaced with pipe, it becomes part of Fife’s storm water drainage system, for which residents are charged a separate tax. Correspondingly, the district’s responsibilities shrink.

Records show that Drainage District No. 23 has consistently taxed the 1,025 property owners in its jurisdiction around $180,000 per year, collectively.

“That’s a lot of money. That’s what I’m saying. $1.3 million. What are they doing with that?” asked Fife homeowner Sean Filomeo.

Filomeo’s tax bill shows he was charged $28.19 by Pierce Drainage District No. 23 this year. He wonders why they keep on taxing if they have so much money in the bank.

“Who do we talk to? Who can tell us at least where this (money) is going?” Filomeo asked.

State Auditor Pat McCarthy would like to be able to answer that question. But she says there’s only so much that her office can do when a government does not respond to their audit demand.

“We can use the Attorney General’s office if we think there’s a crime, but we’re a civil entity, so we can only raise those issues up and let the legislative bodies take care of those problems,” McCarthy said.

In April, the KING 5 Investigators showed what can happen when one of those governments goes unchecked. The longtime commissioner of King County Drainage District No. 5 allegedly diverted more than $400,000 in taxpayer money to his private bank account. The story also showed that commissioner Allan “Ben” Thomas has not been on a ballot since 1986, thanks to a state law that allows the district to bypass a public election if a commissioner is running unopposed.

The same law applies to Pierce County Drainage District No. 23.  There hasn’t been an election since 1998, according to the Pierce County Elections office.

That means there’s no checks and balances from voters.

A check of expenses submitted by Lamberson raises some questions that an auditor might explore.

For instance, Lamberson signed off to pay himself $367 for a district commissioners meeting in March 2018. However, Washington state law says commissioners should only receive about $90 per meeting.

Jaquez says Lamberson encouraged him not to speak with KING 5.

“He said for me not to let you guys talk to me, because it was a big farce,” Jaquez said with a chuckle.

Jaquez says he is speaking out because the district has nothing to hide.

But at least one taxpayer would like more light shining on Drainage District No. 23.

“I want to know where my money’s going,” said Filomeo.