Washington transporter plates, which are issued to towing companies, have been used by criminals who want to conceal cars used in crimes. 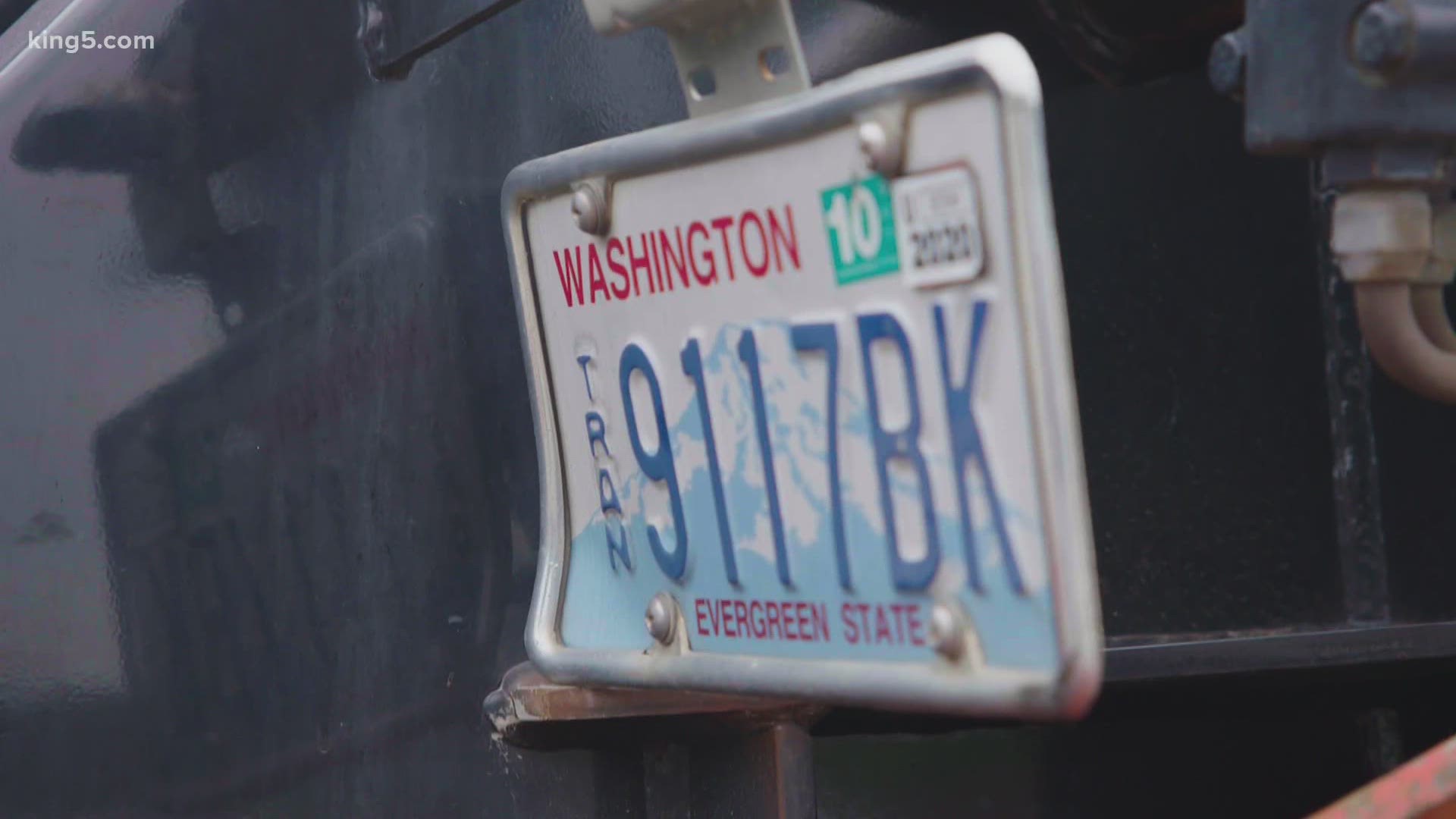 Washington State Department of Licensing (DOL) records show the agency has received hundreds of police complaints about criminals using state transporter license plates, but has not acted to keep them out of the wrong hands.

Transporter plates are typically issued to towing and automotive companies to move unlicensed vehicles from one place to another.

“Anytime they are out there doing an impound on an abandoned vehicle they have to have a transporter plate anytime wheels are on the ground,” said James Aldrich, a longtime driver for Pete’s Towing in south King County.

Every tow vehicle carries transporter plates so it can legally move cars with expired tabs, construction trailers and mobile homes.

But critics say the state makes the plates too easy and inexpensive for out-of-state entities to obtain, and criminals are taking advantage. Police say transporter plates are valuable to a criminals because they help conceal the identity of the owner of vehicles that are used in crimes. Police typically run license plate checks on vehicles they suspect are involved in a crime and knowing who the owner is can help further an investigation.

“During the months of November and December of 2017, the (DOL) compliance unit received over 130 phone calls and emails from federal and local law enforcement up and down the eastern coast of the US, reporting illegal use of transporter plates,” says one undated report in state DOL records that KING 5 obtained through a public records request.

In Manchester, Connecticut a man was sentenced in March for selling Washington “transporter” license plates on Craigslist.

And in Rhode Island over the past three years, police in the city of Cranston have linked vehicles with Washington transporter plates on them to possible drug smuggling operations.

“I know from my experience that people that are involved in the drug trade – transporter plates, dealer plates… those are highly sought after,” said Cranston Police Captain Russell Henry, Jr.

The U.S. Department of Homeland Security worried in 2017 that the same type of Washington license plates were being used by human smugglers.

More than two years later, there’s no indication that DOL has tried to fix the problem.

Washington has reciprocal agreements with 20 states, which means that Washington transporter plates can legally be used in those states.

Records show that police agencies in Massachusetts, Rhode Island, Connecticut, Michigan, New York and Maine complained to DOL that they were seeing increasing numbers of transporter plates on their roadways.

“About two-thirds of the people who were stopped with Washington transporter plates had criminal records,” said Henry.

He says Cranston, Rhode Island police made 17 traffic stops of suspicious vehicles with Washington plates in the last three years, the latest in December.

Records show that criminals start by creating fictitious companies in Washington state. They claim to own a business like a tow company, auto working or vehicle transport.

In truth, the business only exists on paper with the criminal using a fake address.

What they are really after is a Washington state business license, which only costs a few dollars. With that license they can order dozens of transporter plates, which are also inexpensive, and DOL asks few questions.

Police in Manchester say Scully sold transporter plates on Craigslist and other websites to people who could not get vehicle licenses the legal way.

The scheme has a familiar ring to state Rep. Steve Kirby from Tacoma.

“The first thing I think about is, 'Here we go again,' because I kind of have been down this road before,” Kirby said.

In 2017, the KING 5 Investigators reported that wholesaler plates were being used by criminal organizations in other states.

Kirby, who chairs the state House Consumer Protection & Business Committee, said he had not heard of problems with transporter plates until he was contacted by KING 5.

“You can’t just sit here and make excuses for this problem. You’re right. We need to own this, and we need to do our part to make it go away,” Kirby said.

Washington DOL declined to provide a spokesperson for an on-camera interview.

In a written statement, DOL said: “We are looking at rules we could implement to enhance the law that will address the issues we’ve been notified about in other states.”

DOL said one solution could be as simple as “…asking for more information when we receive requests from companies for multiple license plates.”

But he says that program, unlike the transporter system, had few valid users.

Transporter plates are widely used by legitimate companies, and Kirby wants to be sure those businesses can continue uninterrupted.

“It’s not as easy to fix as it might sound,” Kirby said.