The family of veteran Michael Johnson of Concrete, Wash. said they were deceived about his death until the coronavirus pandemic hit. 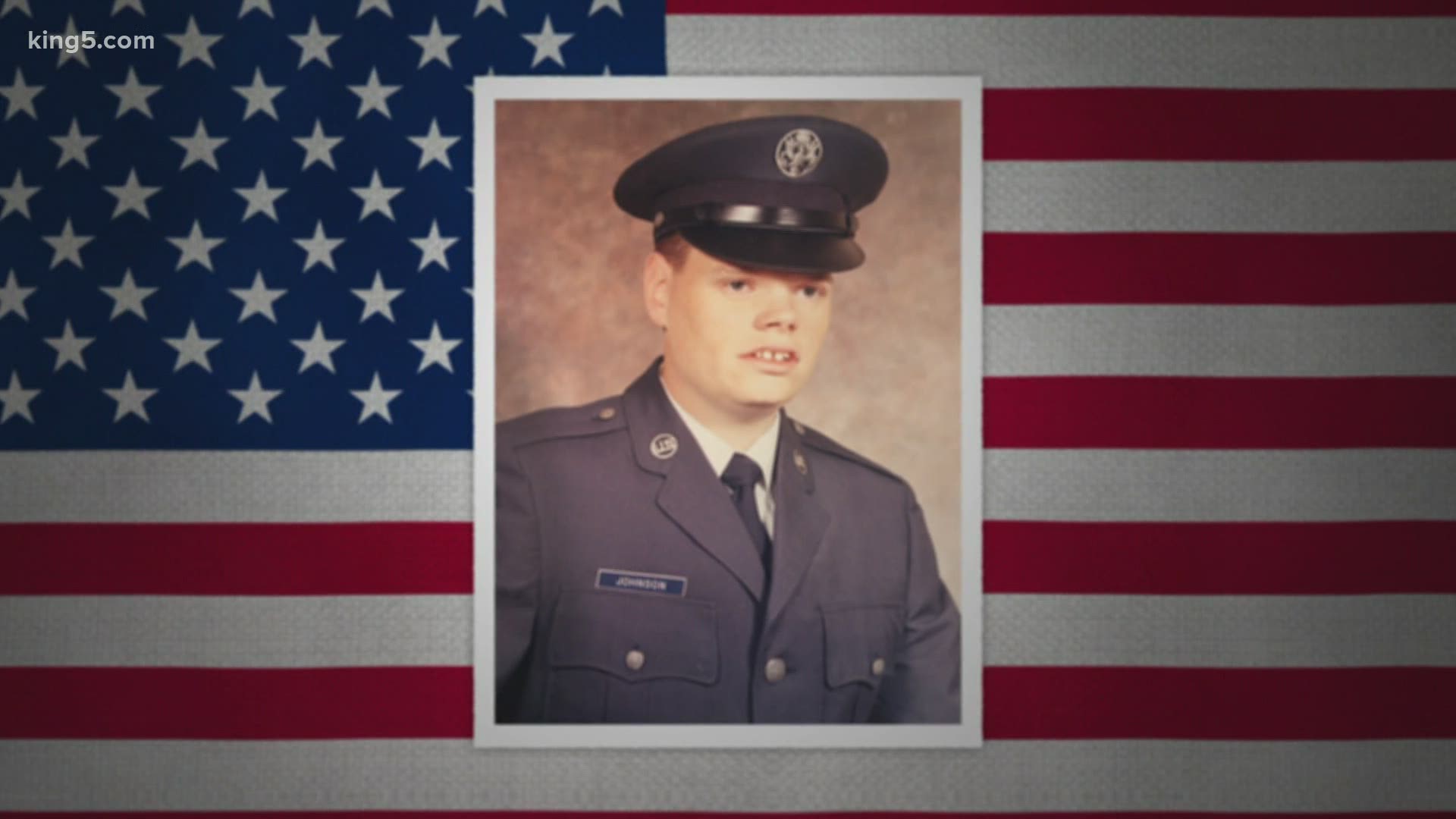 As fears about the coronavirus pandemic were heating up, Kathy Naon of Burien called the Skagit County Sheriff’s Office to request a welfare check on her brother. Michael Johnson, 62, of Concrete, Wash. had several adverse health conditions and Naon could not get through to him.

“He’s got serious health issues. It scared me to death,” Naon said. “I needed to know my brother was okay.”

In late March, approximately 15 minutes after the request for the welfare check, the sheriff’s office called back.

The news was a stunning revelation. Naon said she was close with her brother, who was a career member of the military. He served in the Air Force, then as an instructor in the Coast Guard.

But in the last years of his life, it got more and more difficult to get in touch with him. Phone calls, birthday and Christmas cards went unanswered.

Despite that, as the next of kin, Naon should have been notified of his death.

“No one deserves to have that happen to their family. This is morally wrong, and the devastation this causes a family is ridiculous and it’s hard,” Naon said.

Records obtained by the KING 5 Investigators detail how Johnson’s "daughter," Jodie Hendry-Conrad, took care of his affairs. A 2018 police report shows she called the Skagit County Sheriff’s Office to notify the agency “her father had passed away.”

At the Lemley Funeral Chapel in Sedro-Woolley, the funeral arrangement form was signed by Hendry-Conrad. The owner, Doug Hutter, said she did not want a funeral or an obituary for Johnson.

The official death certificate issued by the Washington State Department of Health lists the "daughter" as the informant who reported Johnson died from “multiple organ failure.”

But KING 5 learned Johnson didn’t have a daughter. He never married and had no children.

Hendry-Conrad was actually Johnson’s longtime, live-in caregiver, paid with benefits provided by Veterans Affairs (VA). She’s also a convicted felon who, according to the family, isolated their loved one to the point where relatives were cut out of his life.

“He was extremely vulnerable. His health was very fragile. She isolated him even further by cutting off communication, by intercepting phone calls and not relaying messages,” Hulse said.

Medical records reveal in his last years Johnson’s physical and mental health declined as Hendry-Conrad’s power in his life increased.

In his will, signed in 2019, he left everything to her. Upon his death, Hendry-Conrad would be the personal representative, also known as the executor. That designation, authorized by a Skagit County Superior Court Judge, would put her in charge of all affairs. The family was completely cut out.

“The thought of my brother going to his grave not knowing we loved him kills me,” Naon said.

Behind the scenes, professionals were concerned about Hendry-Conrad’s motives.

In a 2011 medical progress note, a VA social worker wrote the “veteran is at risk for financial exploitation.”

Another social worker that year said Hendry-Conrad “receives his monthly VA check and uses it for her children and family.”

KING 5 confirmed the concerns led to an investigation by Adult Protective Services, but the disposition of that is uncertain.

Reached by telephone, Hendry-Conrad, 47, said she hasn’t done anything wrong and that she did not engage in financial exploitation.

“I didn’t spend anything without asking. Everything went through him,” Hendry-Conrad said. “We were like a family and he was happy. I sacrificed a lot of my life. I sat at home and didn’t do anything except take care of him. I have lost my best friend.”

Hendry-Conrad also said she never told anyone she was Johnson’s daughter. She said people just “assumed it,” and that one of the funeral directors suggested she write down that she was the daughter.

The funeral director disputed those claims.

“I would never have said that; never. I could lose my license for that,” said Tobi Stidman of Lemley Funeral Chapel. “This is a legal document. (Falsifying it) is wrong on every level.”

The isolation allegedly experienced by Johnson is a risk factor for negative outcomes for seniors, according to experts who work with the elderly.

Neubeck said when seniors don’t have regular contact with family or friends, the isolation creates a breeding ground for the possibility of exploitation.

“There’s no one watching. If (Hendry-Conrad) had been taking advantage of him during his lifetime, nobody knows,” Neubeck said.

Especially during the time of COVID, when senior centers and other forms of community connection are shut down, Neubeck said it’s imperative to check in on the elderly.

“As a society in general, we need to look out for the vulnerable among us and seniors are part of that,” Neubeck said. “Don’t be afraid to call a neighbor and say, ‘Hey, can you check on Uncle Bill, just pop in, make sure he’s doing alright?’”

As a veteran, Johnson was entitled to a military burial service with honors. Naon, his sister, said he said he wanted Tahoma National Cemetery in Kent to be his final resting place.

With Hendry-Conrad in charge, that didn’t happen. She signed paperwork as the “daughter” that authorized his remains be gifted to the Lake Washington Institute of Technology. There, students in the state’s only funeral service program practiced embalming skills on his body. Because of the donation, Johnson was cremated for free.

“He would have never wanted that. It would have made him so uncomfortable just thinking of that. That’s not something he would even consider,” Naon said.

“I’ve never felt that anyone could be more disrespected than he was disrespected in this situation,” said Hulse. “It feels like he was just discarded.”

Hulse said his uncle was a proud veteran who deserved the respect and dignity of an appropriately reverent service.

“I think the worst part of it is that Michael was denied his right to have a proper burial,” Hulse said. “His military service was very important to him. To him, that was probably the single biggest contribution of his life.”

In August, four months after a coronavirus welfare check request revealed the truth and the family was able to obtain his remains, Johnson’s family paid tribute to their loved one.

The service at Tahoma National Cemetery was complete with a 21-gun salute and the presentation of the flag to next of kin – his sister Naon.

“He served honorably with sacrifice and courage. He earned his way into this cemetery. A final resting place,” said an officiant at the service.

A spokesperson for the Lake Washington Institute of Technology said in the school’s history, this is the first time they’ve experienced a situation like this.

“We were extremely saddened to learn about what happened prior to Mr. Johnson’s remains being taken into the college’s care. Our thoughts are with his family during this unimaginably difficult time,” said Leslie Shattuck, public information officer for the Lake Washington Institute of Technology. “We hope that this experience will lead to an opportunity for change in the state law regarding how next-of-kin are verified, so this never happens again.”

Death and dying experts said the system is not set up for double-checking the identity of those coming forward as family members but that the honor system is currently at play.

“We don’t have the ability to track down who the next of kin is. We have to take (people’s) word for it,” said Hutter of Lemley Funeral Chapel.

Johnson’s family said they’re a step closer to finding justice. Hendry-Conrad was charged with a crime related to the case. The Skagit County Prosecutor’s Office accused her of lying under oath to become Johnson’s personal representative in 2019. Hendry-Johnson signed a legal document to say she was qualified for the position as she had never been convicted of a felony, which isn’t true.

On Tuesday, in a call-in arraignment in Skagit County, Hendry-Conrad pleaded "not guilty" to the felony charge of perjury.

On Sunday, Johnson's family visited his plaque at Tahoma National Cemetery and brought flowers of remembrance.