"Instead of seeing him on a TV screen it felt more genuine, personable. So it really just...let us know that he understands our pain." 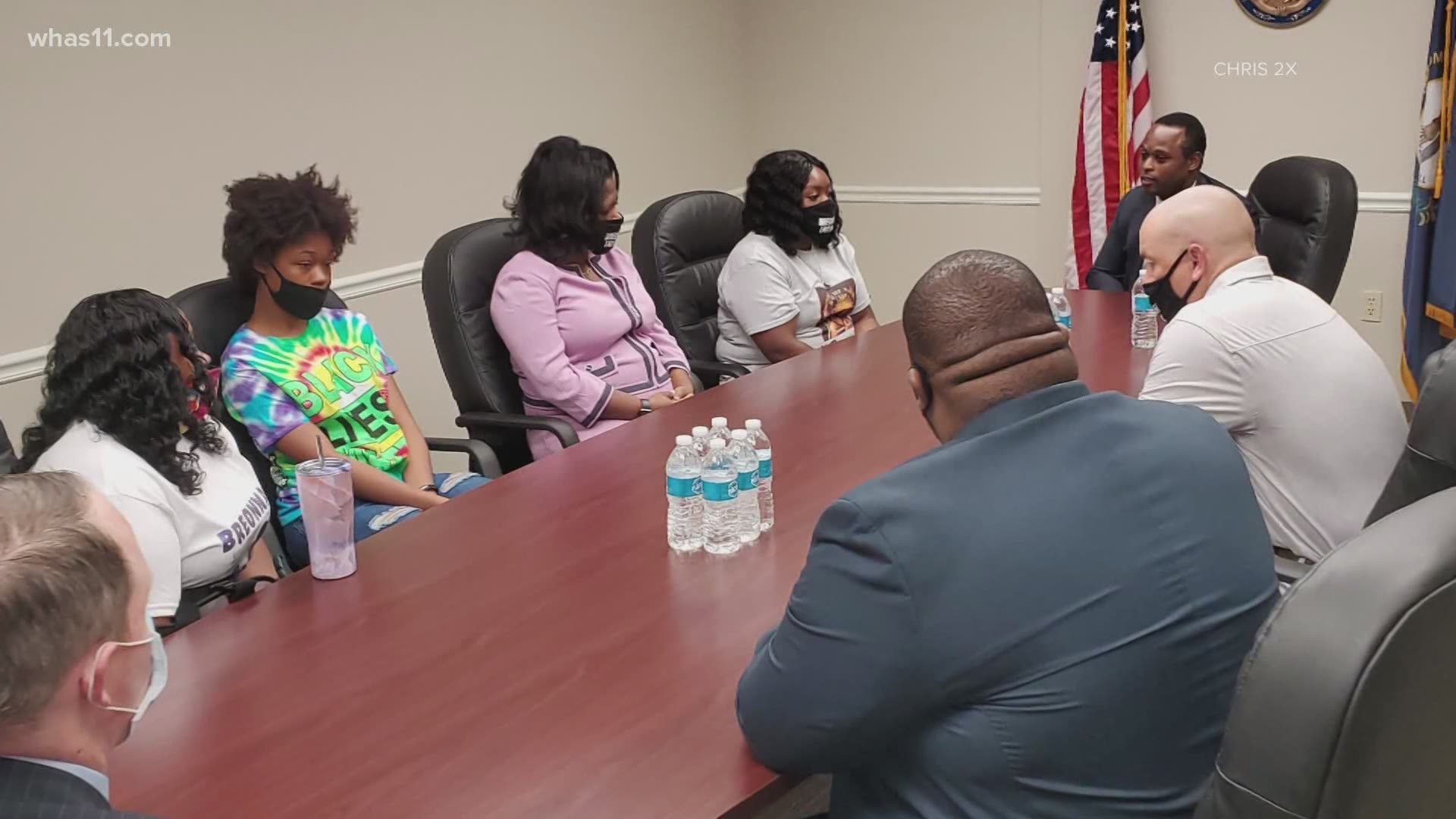 LOUISVILLE, Ky. — Attorney General Daniel Cameron met with the family of Breonna Taylor Wednesday as his office's investigation into her death continues.

"Instead of seeing him on a TV screen, it felt more genuine, personable. So it really just offered us and let us know that he understands our pain," Taylor's aunt, Bianca Austin said. "Our concern is communication; people are not communicating to us, and we're left in the dark about a lot of things that's going on, and that's what we expressed."

The meeting provided an opportunity for Cameron to personally express his condolences to the family.

"The investigation remains ongoing, and our Office of Special Prosecutions continues to review all the facts in the case to determine the truth," Cameron's spokesperson Elizabeth Kuhn said in a statement.

Cameron took over Taylor's case in May, two months after she was killed during the execution of a no-knock search warrant at her apartment.

Since then, Cameron has offered little information on the case. On August 8, the AG's office said they were waiting for key evidence about the shooting from the FBI crime lab.

"Attorney General Cameron remains committed to an independent and thorough investigation into the death of Ms. Taylor," the office said. "The investigation remains ongoing, and we currently await additional testing and analysis from federal partners, including a ballistics test from the FBI crime lab."

The meeting provided an opportunity for Attorney General Cameron to personally express his condolences to the family. The investigation remains ongoing, and our office of Special Prosecutions continues to review all the facts in the case to determine the truth.

Cameron didn't provide the family with a timeline on his decision. Attorney Sam Aguiar who is representing Taylor's family told WHAS11 Cameron said he still needs to re-interview witnesses.

"These ballistics and labs are important and we understand the delay and the need for them, but it's frustrating that the police basically wasted two months investigating themselves in what was clearly a one sided manner," Aguiar said in a statement. "Had this case been turned over right away for an independent investigation, like it should have, then the testing would be complete and we wouldn't be needing to wait for re-interviews right now where these officers actually get asked what they should've been asked to begin with."

Aguiar and Taylor's family say they will remain confident that the Attorney General and the Department of Justice will do the right thing.

"That doesn't mean that we're here for any undue delays, but when we walked out of there today we didn't feel like he's just intentionally delaying the investigation," attorney representing Taylor's family Lonita Baker said.

According to attorneys for Taylor's estate, more than twenty shots were fired into her apartment March 13. Taylor was shot multiple times, attorneys say.

Hankison is the only officer terminated from LMPD. His termination letter states that he "blindly fired" 10 rounds from outside, through the patio door.

FBI Louisville said it collected a "significant amount" of ballistic evidence and completed a shooting reconstruction during its time at Taylor's apartment June 19. The evidence, the FBI said, is being tested at the FBI lab in Quantico.

"Once the FBI Laboratory has completed its findings, FBI Louisville will promptly share our results with the Attorney General's Office," FBI Louisville said in a statement.

RELATED: 'LMPD will not dictate how we demand justice': protesters respond to new restrictions

►Make it easy to keep up-to-date with more stories like this. Download the WHAS11 News app now. For Apple or Android users.