In rural King County, elected official answers to no one

For 30 years, Allan Thomas oversaw the collection of hundreds of thousands in tax dollars. But a KING 5 investigation found that money is making its way into his personal bank account.
Author: Chris Ingalls
Published: 11:37 AM PDT April 25, 2019
Updated: 7:38 PM PDT April 25, 2019

Ronald Reagan was president of the United States the last time property owners in Enumclaw voted for the office that manages the publicly funded drainage district charged with protecting the area from flooding.

That was 1988. The winner of that election was Allan “Benny” Thomas. Not once since that time have voters been asked to cast a ballot for the commissioner who leads King County Drainage District 5.

Over those 30 years, Commissioner Thomas oversaw the collection of hundreds of thousands of tax dollars from property owners. A KING 5 investigation unravels how that tax money – meant for upkeep and improvements to the 18 miles of flood-control trenches in and around Enumclaw – is making its way into a bank account for the personal use of Thomas and his wife.

Thomas insists that all the spending on his watch was done properly.

“Oh yes. It has to be. We go through the state auditor’s office and everything. So, we keep our books up very tight,” Thomas said when questioned by KING 5.

But KING 5’s investigation reveals Drainage District 5’s boss evaded the system of checks and balances intended to make the district subject to the voters’ will and laws governing how taxpayer money is spent.

Starting 10 years ago, complaints were made to King County elections officials about how no election had been called in District 5 for decades. Election officials so far have not taken action, insisting that the law says only the commissioner – Thomas – can call for an election.

All the while, Thomas, a longtime dairy farmer whose 150-acre farm is one of the largest parcels in the district, is free to levy taxes on property owners and spend the money as he sees fit, including steering funds to his own bank account.

What is a drainage district?

Drainage districts are small, century-old governments established in Washington under laws that create “special-purpose districts,” such as water, fire, and health districts.

Drainage District 5 and 5A were established in 1895 to help drain surface water from what was at the time almost entirely farmland. Runoff flows through a trench system that carries water to Newaukum Creek, north of the City of Enumclaw, and then to Green River.

Drainage district commissioners have the authority to tax property owners the dollar amount that they anticipate it will cost to maintain the system for the upcoming year.

In addition to Thomas, some records show his wife JoAnn listed as a co-commissioner, and another Enumclaw landowner named Kenneth Olson.

The 600 taxpayers living in District 5 are assessed a collective $70,000 to $80,000 per year, with each owner’s specific assessment varying based on the amount of land owned and how much runoff a property produces. Commissioner Thomas sets that annual assessment amount, a total that is second only to King County Drainage District 1, which serves the more populous Green River Valley in the Kent region.

At Thomas’s direction, King County pays that money to contractors hired to clean, dredge, and maintain the ditches that comprise the district’s drainage system.

“I questioned why KC (King County) has no records of district elections when my reading of the law indicates that they should,” Enumclaw City Engineer Scott Woodbury wrote to his superiors in a January  2009.

Records show that Woodbury traded emails and phone calls with a host of government agencies, including the offices of King County Elections, Assessor and Prosecutor, as well as the state Public Disclosure Commission and the Washington state Attorney General’s office.

The consistent response to Woodbury’s queries: It was the drainage district commissioner’s job to call for elections.

By 2012, officials in Enumclaw were worried about how Thomas was spending the tax money he collected from residents both in and outside the city.

“Does King County act as a bank and issue all checks for Drainage District 5?” Woodbury asked in an April 2012 email to the King County agency that funds special purpose districts.

Robin Richard, in the King County office of special districts, directed Woodbury back to Commissioner Thomas to answer questions about oversight of the taxpayer’s money.

Thomas calls the city’s complaints about him harassment and “small town politics.”

“A couple of guys in the city have raised a fuss about it. They haven’t come talk to me at all,” Thomas said.

Billing records submitted to King County show that the contractor doing most of the maintenance work on the trenches in Drainage District 5 is a company called A Conservation Services, or AC Services.

The company address listed on the invoice on 440th Street in Enumclaw is the house where Thomas’s mother-in-law lived in 2016.

Thomas admits that A Conservation Services was a family affair, a company started by his son Alexander in 2012.

“My son was a legitimate contractor and before I (did) it I checked, and I checked carefully that it was OK to do business like that, and it was,” Thomas says.

Thomas may not have known it when he talked to KING 5, but his son was telling police a different story.

In 2017, the City of Enumclaw wondered if poor maintenance in Drainage District 5 was contributing to increased flooding on city streets and private property. 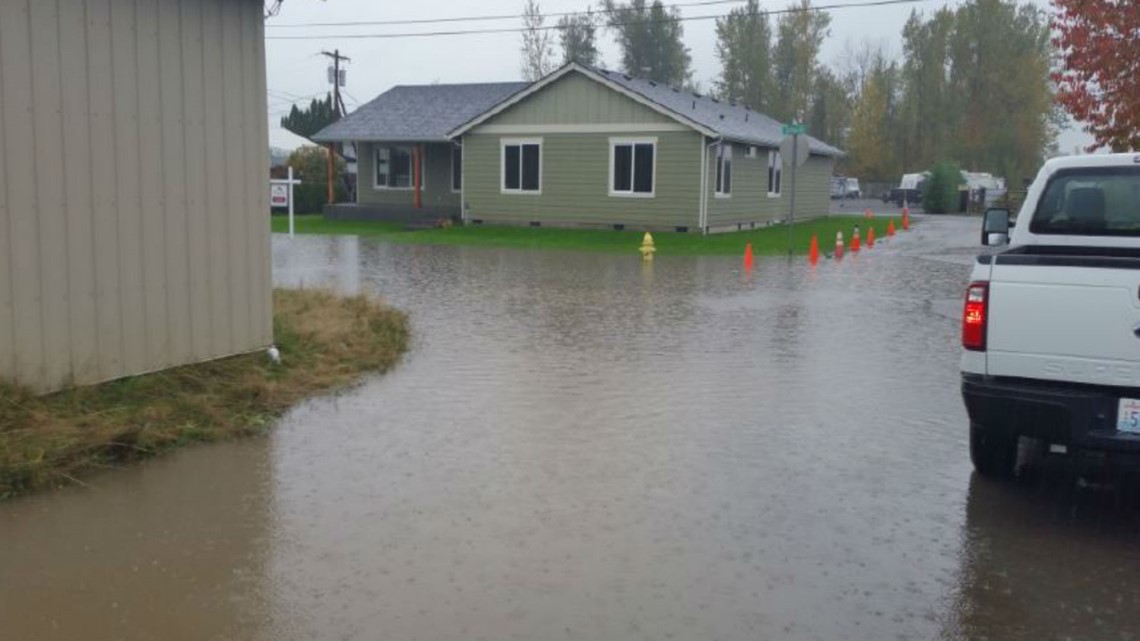 “We asked our staff and some of our field staff, ‘Anybody recall seeing any maintenance work done during this period?’  Nobody had any recollection (of work being done),” said Enumclaw City Administrator Chris Searcy.

City officials knew Drainage District 5 was collecting tens of thousands of dollars in assessments from property owners who lived in the district, raising questions about where that tax money was going.

“There’s a possibility that behind the scene there’s an improper use of people’s money,” Searcy said in an interview with KING 5.

According to records, those concerns led Enumclaw City Attorney Mike Reynolds to file a November 14, 2017 report with Enumclaw police that said, “he believed someone was collecting taxpayer’s money fraudulently.”

“There’s a couple things he hasn’t paid me for,” Alex Thomas told the detective in a videotaped interview obtained by KING 5 through a public records request.

Alex explained that his father urged him to start A Conversation Services in 2012. He told the detective that he worked two jobs for the drainage district but that his father had yet to pay him. He also said he believed AC Services had since folded.

“I didn’t do any jobs after that,” Thomas said in the police interview.

Alex Thomas was surprised when the detective told him the company still existed, and that money was pouring into a bank account established for the business in 2012.

A police report says Allan Thomas’s wife, JoAnn E. Thomas, had access to that account and that money that appeared to be county payments to A Conservation Services was deposited into the account.  Records also show years of withdrawals for what appear to be personal expenses, according to the police report.

Alex Thomas also told the detective that his father was “freaked out” that people were asking questions about Drainage District 5.

“Yeah, he’s like, ‘We got to stay together.  If they (the police) call you in, call me.  I’ll get you a lawyer,’” Alex Thomas told the detective.

At some point in 2018, police forwarded their case to the King County Prosecutor’s Office seeking fraud charges.  But that case is sitting on a prosecutor’s desk with no charges filed.

Allan Thomas denied that A Conservation Services is a shell company.

“Is (sic) there dummy companies?  No. There’s no dummy companies,” Thomas said.  “There’s been some complaints, but I guarantee you (the work has) been done.”

He pointed to a 2016 audit by the Washington State Auditor’s Office that gave the district a clean bill of health.

The auditor’s office says it has opened a new investigation into Thomas but won’t comment further.

“I did not know that,” Hughes said when told he was paying taxes to a commissioner who had not been elected for 30 years.

“I can’t say corrupt, but it sounds suspicious to me,” Hughes said.