A former special education teacher in Auburn believes the school retaliated against her after she spoke up about students' rights. 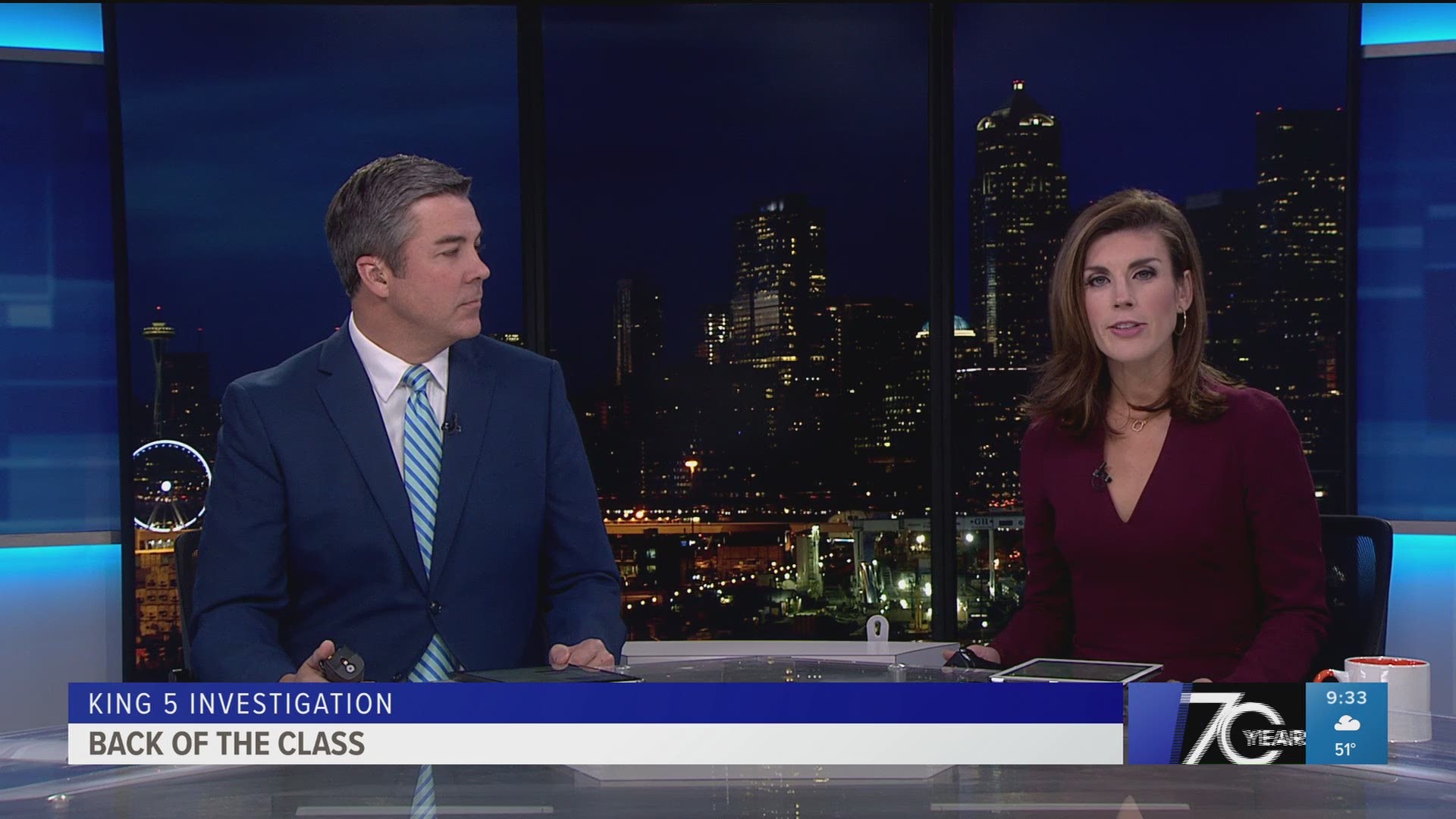 Jason and Rachel Legaspi were nervous when their daughter Presley, who has autism, started kindergarten in the Auburn School District last year.

Presley had few words, few friends, and little self-confidence. But early in the year, it was obvious that Presley was breaking out of her shell. To their surprise and relief, she was flourishing both academically and socially.

“Last year I noticed, for the first time, she would actually be playing with kids and going up to them and saying ‘Hi, I’m Presley!’ and that was a shocking eye-opener to see that, and to see your kid making friends," said Rachel.

“She grew confident,” said Jason. “And she was communicating way more than she did before so... Leaps and bounds. It’s great.”

The couple said Presley’s special education teacher at Evergreen Heights Elementary School, Elicia Kneadler, deserves much of the credit. They said Kneadler had great communication skills, passion for her job, and treated all her students with special needs with respect.

“Ms. Kneadler was off the charts awesome in helping (Presley) develop,” said Jason. “She blew us away with her work ethic and communication. She was so beneficial for Presley and it’s hard to come up with more words for just how awesome she was.”

The school principal, Anne Gayman, seemed to be just as enthusiastic with Kneadler’s performance. She gave her extremely high marks on her first two observations, including 46 "D" marks for "distinguished," the highest grade a teacher can receive.

On January 17, 2018, Gayman noted on the assessment: “Classroom routines are established and the environment is calm and welcoming… Staff are positive and expressive with students.”

But three months later, that all changed. Kneadler said her crime was advocating for students with disabilities who needed someone to speak up for them.

“I was punished for it,” said Kneadler.

Kneadler said she knew the principal wanted her out after her third and final evaluation of the year, dated April 24, 2018. Principal Gayman didn’t give the teacher any of the highest marks like before. And for the first time in Kneadler’s 12-year career as a special ed teacher, she received “unsatisfactory” ratings – the lowest possible that typically mean you’re on the way out the door.

“(Unsatisfactory) is very bad. It’s basically the kiss of death (for a teacher). To receive an unsatisfactory on your last evaluation over the course of a school year, where you’ve received proficient and distinguished marks on other evaluations, is completely unusual,” said Seattle-based special education attorney Shannon McMinimee.

On the final evaluation of the year, Gayman wrote Kneadler was a troublemaker who had negative conversations with staff members: "Speaking negatively about staff does not create a healthy teaming and collaboration environment. For this reason, I am recommending non-renewal for the 2018-2019 school year.”

In other words, Kneadler wasn’t wanted back. She resigned. She said she opted to quit to avoid a termination on her record, as recommended by her union representative.

Kneadler said the year began to unravel when she started noticing problems with the school’s special education program and didn’t keep quiet about them.

In emails to the principal, Kneadler raised concerns about student safety and students not receiving therapies guaranteed them on their federally-mandated Individualized Education Plans (IEPs).

Kneadler said she wasn’t shy about raising concerns after a highly-skilled paraeducator (teaching assistant) was transferred to another classroom in the building. She said that left her students, who had the highest needs in the school, vulnerable.

In a March 31, 2018 email, Kneadler wrote: “We have seen quite a bit of violence and unsafe behavior" in the classroom with the assistant gone.

Previously, in a March 22, 2018 email, Kneadler advocated for a student who was allegedly not receiving his social/emotional behavior therapies that were guaranteed him in his IEP. Not following an IEP is against federal regulation under the Individuals with Disabilities Education Act (IDEA) of 1990. The IDEA ensures that students with disabilities are provided a free and appropriate education tailored to meet their specific needs.

In the March 22 email, another special education teacher at the school suggested giving a student fewer behavior therapy minutes than what was listed in his IEP.

In response, Kneadler wrote “He needs it… and it is following his need and what the IEP says. I don’t think we can amend (his IEP) because his behavior is showing he needs it.”

Kneadler said shorting students on their agreed upon minutes of therapy was a pattern at the school and that she discussed the problem with the principal and other teachers.

On April 24, 2018, the principal submitted the third and final evaluation with low marks and the recommendation to sever ties with the teacher.

The Auburn School District said Kneadler was given a poor evaluation because of performance concerns, not as a means of retaliation.

“We had concerns about her performance,” wrote Vicki Alonzo, Auburn School District (ASD) Director of Communications in a statement. “We followed appropriate employment laws and evaluation processes… The ASD did not retaliate, she resigned from her position. She has not challenged her written evaluation or employment status through available avenues."

As for the concerns raised about students not receiving mandatory therapies, Alonzo said the district follows special education law. “The concerns (from Kneadler) were made regarding students in another teacher’s classroom; she was not a teacher in that classroom. We follow all special education laws. IEP adjustments are made through an IEP team meeting and parent involvement is a part of that process,” wrote Alonzo.

Other cases of alleged retaliation

The KING 5 Investigators have learned of other cases of alleged retaliation in other parts of the state.

In Eastern Washington, former paraeducator Veronica Vargas filed a lawsuit against the Mabton School District near Yakima in July. In the suit, she alleges she was terminated for advocating for students.

In August, former Tacoma School District school counselor Lisa Cash filed a complaint with the Office of Civil Rights alleging retaliation for bringing problems to light at Edison Elementary School. In the complaint, dated June 26, 2018, she outlined the concerns she brought to administrators. “(A) child was put in a self-contained (special education) classroom (who didn’t qualify for special ed) several hours a day, many days a week without even notifying the family… This is a huge special education violation to both this family and the other six children already qualified to be in (the special) ed classroom,” wrote Cash. “My job was to advocate for children and families. I did my job so well that it became threatening and the only way to keep me quiet was to get me out of the way,” she wrote.

Special education attorney McMinimee, who’s been retained by Elicia Kneadler, said retaliation is illegal and sends a chilling message to educators who have a duty to report non-compliance.

“Students, families, and other school staff receive the clear message that if you speak up when you, in good faith, think students with disabilities are being wronged, you will be the one to pay the price,” said McMinimee.

The terminations come at a time when there is a “critical shortage” of special education teachers in the state of Washington, according to Glenna Gallo, Special Education Assistant Superintendent with the state’s Office of the Superintendent of Public Instruction (OSPI).

“These shortages result from recruitment and retention challenges, which are impacting both rural and urban school districts across the state. These shortages impact all students with disabilities in the state, as they cover all age ranges… and also include a dearth of speech-language pathologists and school psychologists,” said Gallo.

In the 2017-2018 school year, dozens of special education positions were filled with subs and teachers without expertise on students with special needs.

“They need every special ed teacher that genuinely wants to be there for those kids. Why would you want to get rid of them?” said Kneadler.

Presley Legaspi is in first grade now at Evergreen Heights Elementary School. Her parents said they don’t think she’s regressed with a new teacher, but that they don’t have nearly the amount of communication this year.

“To lose a great teacher like Ms. Kneadler is terrifying. I constantly worry ‘what’s she doing? Is she being included in the (general education) classrooms anymore?’ (This year) I feel like a pest because I’m always having to ask,” said Rachel Legaspi. “We miss her terribly and I know Presley does. (Ms. Kneadler) was a great resource and communicator.”

“We wish we still had her,” said Soukie Kawaii, whose son has autism. “I don’t know why this happened to a good teacher who was really passionate. You could tell she wasn’t there for the money. She wanted to help the kids with disabilities.”

Anna Everson said her son, 6-year-old Kristos Everson, who has Down syndrome, made huge strides in Kneadler’s class. “He flourished. His speech and other skills really improved. My child is non-verbal and for the first time last year he said ‘Mommy.’ I credit Elicia for his development. I was in tears when she left. It was devastating,” said Everson.

Kneadler has started a business focused on advocating for the rights of children with disabilities. She is considering suing the district.

“Nobody will ever take my passion away from me. What happened is those kids lost a passionate teacher,” said Kneadler.

The Auburn School District responded, "The district believes our number one duty is to ensure students are able to receive their educational programs in a safe and caring environment. When we believe a staff member is not a good match for the program or needs of students, we address it.”