Cornelia Fort was among the very first to meet the enemy during the attack on Pearl Harbor. Now her story is being shared through her airplane that has landed in Skagit County. 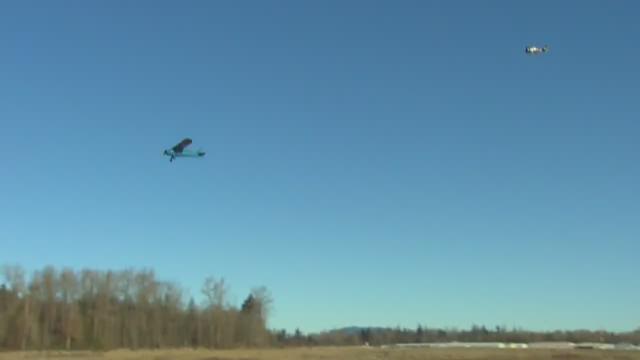 Pilot Greg Anders is resurrecting the lost story of an obscure American aviator.

"It’s actually kind of a chilling experience to be able to tell her story with her own airplane," said Anders.

The story surrounds an old civilian aircraft, a 1941 Interstate Cadet. It was being flown in the skies over Pearl Harbor 75 years ago when the Japanese attacked. Behind the controls was 22-year-old Cornelia Fort.

Fort was a civilian giving flying lessons that morning, but she ended up becoming an unwitting combat pilot.

The one-time Nashville debutante became the first American to engage with Japanese war planes when she was hit with machine gun fire.

"She pulled the aircraft up. The other plane went right underneath her, barely missed her," said Anders. "She saw the rising sun on the wing and said, 'Oh my goodness, we’re under attack by the Japanese. On December 7, this aircraft is the most historically significant aircraft in the United States, if not the world."

Fort and her student-pilot escaped unscathed. The plane worked the Hawaiian Islands until the 1970's. It ended up in pieces, destined for a Phoenix scrap heap. Anders found out about it over a beer at a bar.

"It was a very expensive beer. But look where it led us," he joked.

It led us to a memorial flight on the anniversary of Pearl Harbor. Anders re-created Fort’s encounter in the skies over Burlington’s Heritage Flight Museum where the plane is now housed.

To Anders, the plane, pilot, and their story serve to remind all of us that we shouldn’t take any day for granted and to be grateful for every blue sky.

"No matter how good or bad things are everything can change very quickly," Anders said.