Babies born too soon spend a lot of time in the NICU before being sent home. Volunteers make sure they get plenty of cuddles at this Seattle hospital. 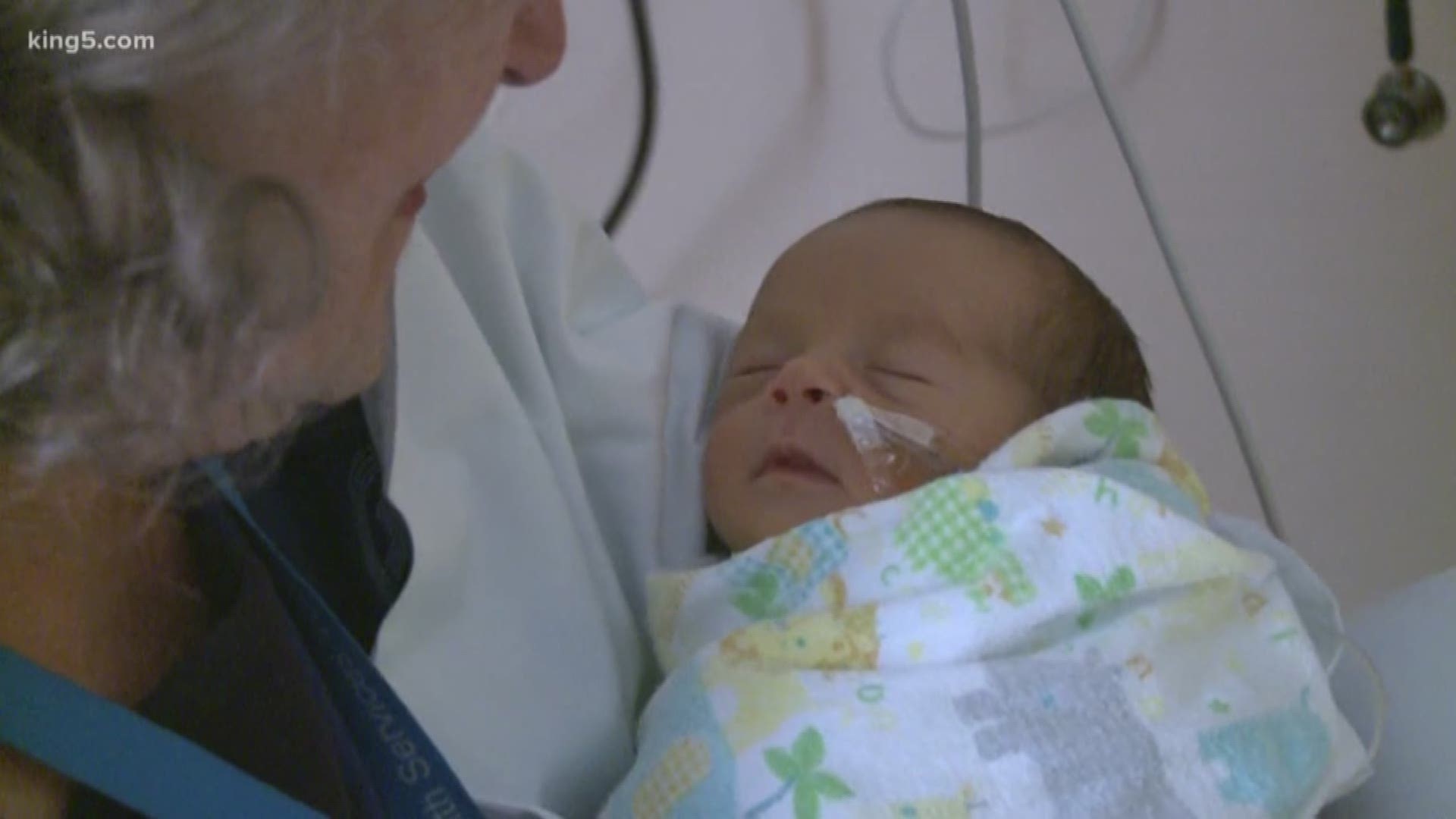 Cuddlers at Swedish Medical Center have only one task. It's not just adorable, it's crucial.

All babies need cuddling after their born. It's not a sentiment. It's a fact. Especially considering they spend a lot of their time being poked and prodded and not in their parents' loving arms.

"I didn't get to hold him until he was 24-hours old because he was in an incubator, he was in the incubator for two days. So, I relish the time that I do get to hold him, but now it's going on 13 days. There's something to be said for getting some help," says mom Emily Byrd.

She and her husband Joe welcomed their baby at 34 weeks after an emergency C-section. When we met them, it was the first time they'd slept in about 13 days. Joe and Emily want to hold baby Wilder every chance they can, but when they can't, it's Dorothy Canavan to the rescue.

"Different ones like different things. Sometimes they like the little bottoms patted. Other ones want to curl up," said Cuddler Dorothy.

Dorothy Canavan is one of a handful of volunteers at Swedish Medical Center who dedicate their time to cuddling babies in the NICU. It's a godsend for parents and nurses who need an extra hand to keep babies calm — because crying equals calories.

"When they're expanding calories to cry, they're not growing, and so we don't like to hear babies crying or being that upset. So it's important for us to be able to respond and attend to that as quickly as possible. And we're able to do that with our cuddler program," said Trish Nervik, nurse manager for the NICU.

Nervik said being a cuddler is much more than a hobby. You are required to keep a regular schedule and undergo extensive screening as well as training. But you also must have the magic touch.

"So I start talking to them, talking by voice and say no crying here now, and soothing them and just my voice. I do not sing to them like some cuddlers do because I cannot sing and that would probably be bad for the baby. So, I'd rather talk to them," Dorothy said.

Because pre-term babies are not fully developed they are often fussy, which can be very stressful for parents as well as nurses.

"We would love to be able to sit and hold every baby but when you have to feed another baby, and you just don't have the time to be able to do it all and to help take care of their needs, and so we love being able to have cuddlers here that can sit and actually spend time," Wilder's NICU nurse Michelle said.

In the six years that Dorothy has been cuddling babies, there have only been three babies she has not been able to console.

"Three babies out of six years isn't too bad. I've tried to count up how many babies I've held over the six years. I think it's about probably about 1,200," Dorothy said.

It's a pretty good record, but the reviews from parents are even better.

"We have spent every night here because we've been terrified to leave his bedside. We just went home for the first time and feel comfortable enough because of the nursing care that we received here, and people like Dorothy make you feel at ease," Emily said.

Along with the screening and training, there are strict rules for the cuddlers. They must stay seated and only the nurses can pick the babies up or put them down. If you would like to find out more about the cuddler program check out the Swedish volunteer services page.

As for baby Wilder, he is now 17-months-old, happy and healthy.