323 Spokane students excluded from school due to measles vaccine law

A total of 323 Spokane Public Schools students were excluded from school after Exclusion Day due to vaccination rules, but that number has since dropped. 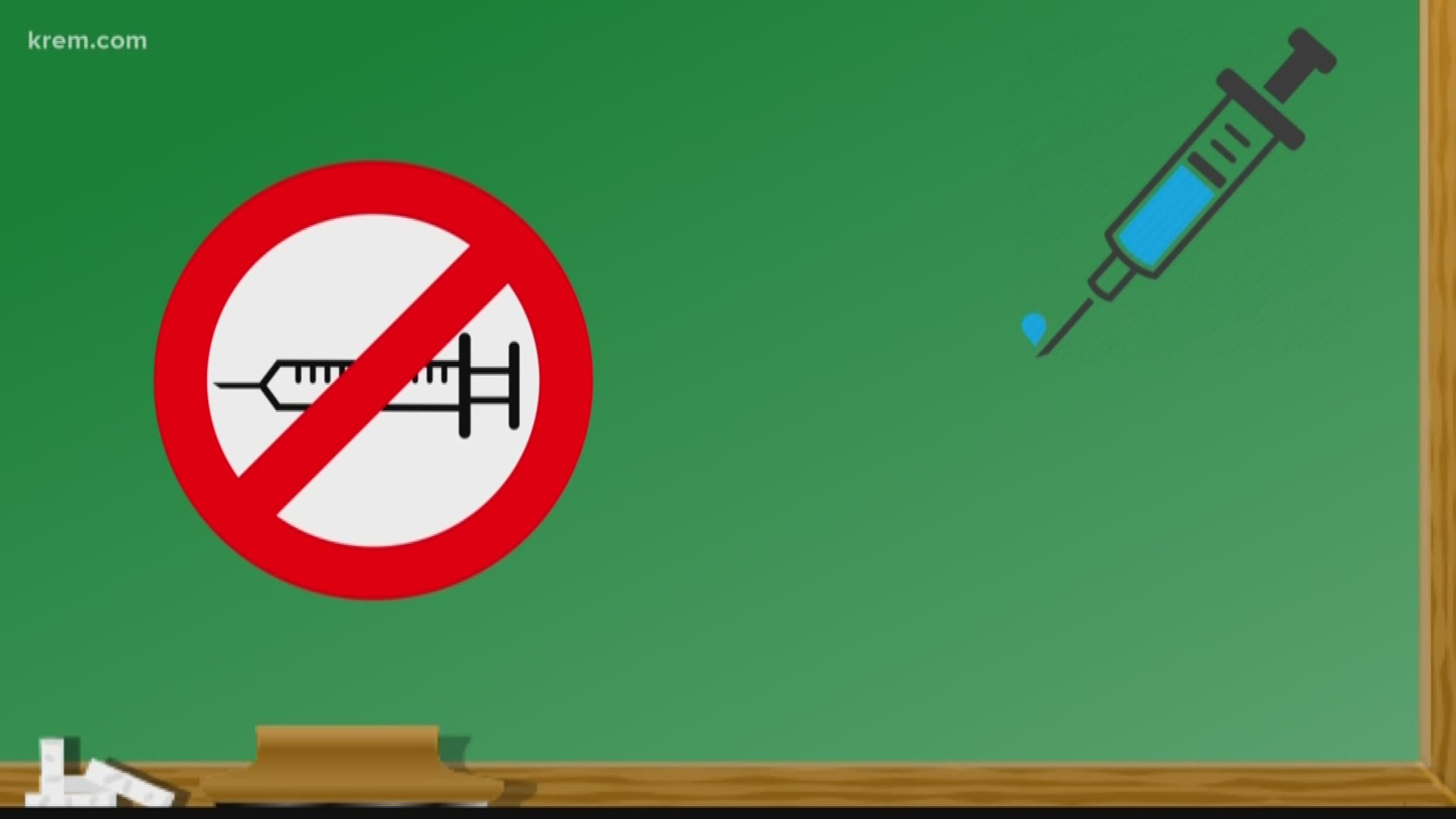 SPOKANE, Wash. — Hundreds of Spokane Public Schools students either received vaccines or updated their vaccine paperwork over the past two weeks to comply with the state and district's vaccine laws.

A total of 323 Spokane Public Schools students were not allowed to come to school on Oct. 14 because they either claimed a personal exemption for the measles, mumps and rubella vaccine or they didn't have the proper paperwork for the school's vaccination requirements.

That number dropped to 35 on Oct. 18. As of Oct. 29, only 10 students were not in compliance, according to school district spokesperson Brian Coddington.

A Washington law that went into effect in July no longer allows for personal exemptions for the measles, mumps and rubella vaccine. It requires students to either get vaccinated or claim a religious or medical exemption in order to attend public schools and day cares.

Oct. 14 was exclusion day at SPS; the first day students were not allowed to come to school without their required vaccine paperwork.

A total of 323 students were kept home that day, including 23 students who still claimed personal exemptions.

The week prior, the number of students without their paperwork in order was 911, Coddington said.

On Thursday, Oct. 11, SPS told KREM about the 23 students who still maintained personal exemptions but not the students who did not have proper paperwork.

Coddington told KREM 2 the district has had tough conversations with parents, but they have known about the law for months.

Students who are not in compliance will receive homework while they are missing school.

Coddington previously told KREM that just under 600 students have medical or religious exemptions for some vaccines.

Washington has had two outbreaks of measles in 2019 with a total of 86 cases, according to the Department of Health. The majority of those cases were in Clark County, but the more recent outbreak included 12 cases in King County, two in Pierce County, and one in Snohomish County.

During the 2018-19 school year, 3.7% of exempted Washington students, or 41,871 kids, claimed a personal exemption, according to data from the Washington State Department of Health.

More than 8% of Spokane County students were listed as exempt during the 2018-19 school year, according to Department of Health data.

The Mead School District also sent a letter to families in June, warning them that students who do not comply with the new law could be sent home in October.

Approximately 34 students within the district did not have required MMR exemptions or immunizations, according to district leaders. That number sat at 80 in late September.

The district said they do not have a drop-dead exclusion date, as each school works with individual families to come into compliance.

Mead spokesperson Jolene Andres sent a statement from nurses with an update on Thursday:

"We did not set a District Wide drop dead exclusion date for MMR but have contacted our parents about all immunizations that are out of compliance and most of our exclusion dates are listed for after the FREE Immunization clinic next week at Farwell."

RELATED: Hundreds of students not compliant with new vaccine law in western Washington

CVSD did not have vaccine data in September

When KREM reached out to Central Valley School District spokesperson Marla Nunberg in September, she did not yet have data on MMR vaccination compliance. She added that the district is following procedures guided by the Department of Health.

KREM has reached out to Nunberg for an update on vaccine compliance numbers and the district’s policy.

Policies on the MMR vaccine extend beyond primary and secondary schools in the Spokane.

Beginning fall 2019, the Eastern Washington University Board of Trustees passed a policy requiring all students to show verification of MMR immunity or they would not be allowed to register for winter classes.

Winter registration runs from Nov. 12 to Nov. 19 for EWU students.

Students must provide documentation that shows two doses of the vaccine received after one year of age or at least one month apart, a blood test showing immunity, or a diagnosis of MMR signed by a healthcare professional.

EWU spokesperson Dave Meany said students have been informed that a hold can be placed on their account if they don’t show proof of vaccination. With winter registration not starting for another month, the university is focused on providing them with the information they need to get it done, or show proof of immunization.

EWU student can get free vaccinations at MultiCare Rockwood.

RELATED: Most of Washington’s kindergarteners are fully immunized for school, state says