The unions say all parties have "made significant progress on key issues" and will continue bargaining on respective contracts. 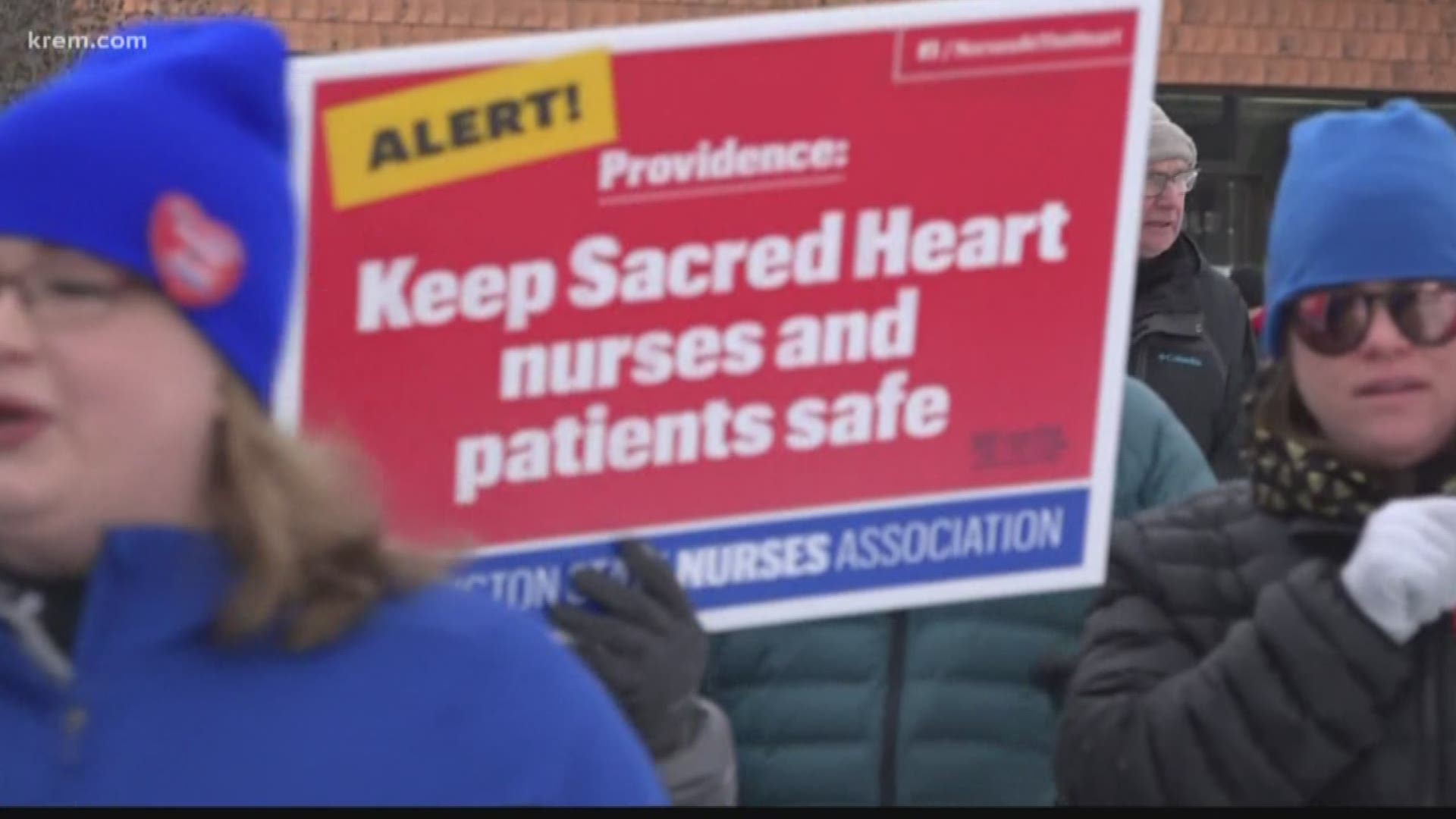 SPOKANE, Wash. — Unions representing nurses and other health care workers in Washington state announced on Friday morning that they have paused plans to strike.

The three unions representing 13,000 Providence health care workers at 13 hospitals statewide, including Sacred Heart and Holy Family in Spokane, say parties have "made significant progress on key issues" and will continue bargaining on respective contracts.

A press conference that would have announced strike plans at 8:30 a.m. on Friday has since been canceled.

"We are committed to working through outstanding shared interests regarding patient safety, workplace violence prevention, and recruitment and retention," the Washington State Nurses Association union wrote in a statement on Friday.

The Providence Sacred Heart Board of Directors told KREM they are pleased to expedite the negotiation process.

Gerard Friesz, a WSNA staff member, said a bargaining sessions on Thursday night was one of the most productive sessions held yet. He also said they don't want to strike.

"Our goal has never been to strike. Our goal has always been to reach a fair contract, and we feel like we're on the right path to do that," Freisz said.

The reason for the pause in striking? The Providence Board of Directors canceled an offer that would cut nurses' sick leave, according to the WSNA.

Nurses and health care workers at Providence hospitals statewide have been in contract negotiations for months and even more than a year in some cases.

Alyssa Boldt, a nurse at Sacred Heart, called the process a "rollercoaster."

Negotiations in November and December did not produce adequate progress, the WSNA said. However, 24-hour joint discussions with all three unions, including UFCW 21 and the WSNA, have resulted in "the most significant progress to date," they said.

The unions agreed to pause Friday's filing of a 10-day strike notice in response to the progress made and a commitment to hold ongoing negotiations in the coming days.

Nurses and caregivers at Swedish Medical Center, the largest healthcare provider in the Seattle area, have also postponed plans to strike.

Union leaders said Sacred Heart nurses have proposals on the table that address all of those issues. Members of UFCW 21 at Sacred Heart and Holy Family also have similar proposals.

The year-long dispute between the hospitals and unions representing healthcare workers has gone back and forth over benefits, time off and patient safety.

"We wouldn't do it if it wasn't that big of an issue that's how big of a priority for us that we have to take this step to vote and say we're ready if we have to but that's not the ultimate goal," said Stevie Lynne Krone, who is a nurse at Sacred Heart.

Lynne Krone is a nurse on the cardiology floor at Sacred Heart. But Lynne Krone said the hospital would likely bring fill-in staff from outside of the area if a strike were to happen.

"Then they would bring in traveler nurses to fill our spots during that time," she said.

A UFCW 21 union spokesperson told KREM that some staff could also take on positions they don't normally fill if a strike were to happen. He said those who don't strike and the people called in could be forced to take on new roles they're not suited to do.

The hospital said the average salary for nurses is $80,000 and they receive five to seven weeks paid time off, which they said is "market-leading compensation."