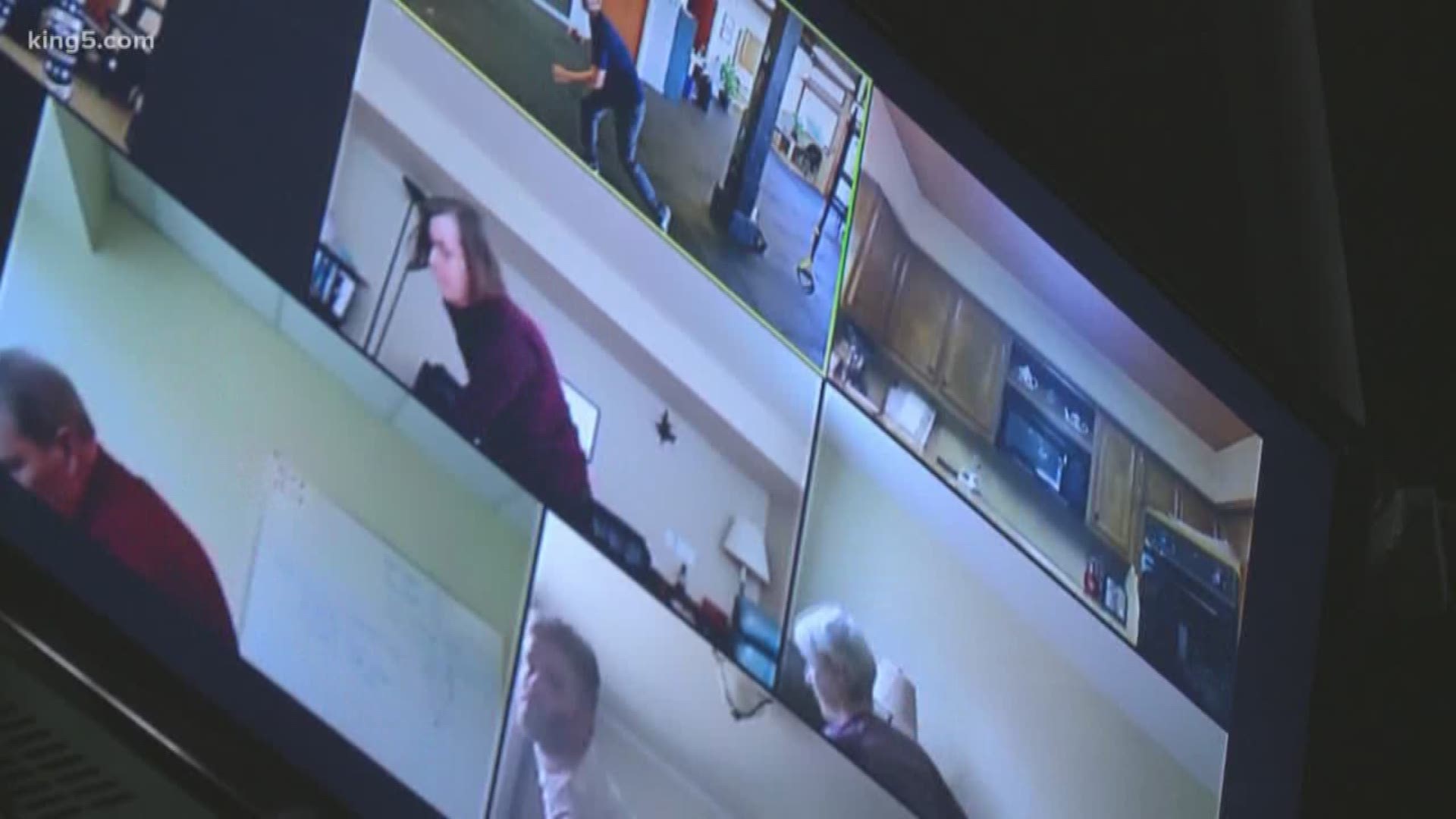 A select group is working out together regularly to stay in shape and to slow the progression of Parkinson's Disease. The Parkinson’s Fitness Project targets the Parkinson’s community in the gym but also on the web with videos and live exercise classes.

Physical therapist Dr. Nate Coomer stands in front of a laptop connected to the Internet. On the screen are multiple video windows showing the members tuning in live for a unique exercise class.

“Together… out, together out,” Nate instructs to the class as he performs the movement.

His clients tune in to this Seattle gym from all over the world. It’s a devoted group. It’s a mindful group. It’s a group that needs exercise to live.

“I feel like I have purpose in my career as a physical therapist and it drives me. I really want to do more. I want to reach out to as many people as I can, not just in Seattle but anywhere in the world. I feel like there’s value in what I’m doing,” said Coomer, creator of the Parkinson’s Fitness Project.

Coomer's students all have Parkinson’s disease in various stages, and he’s devoted his physical therapy practice specifically for those with Parkinson’s.

“This is the one disease where I felt like I actually had purpose when I was treating these people and was actually having an effect with each session,” said Coomer.

Parkinson’s is a slowly progressing neuro-degenerative disease. There are no cures or medicines that stop the advancing effects.

The symptoms are varied among different people through the most well-known expression are tremors. But movement-related symptoms are just the tip of the iceberg with a disease that can take years, even decades to progress. Apathy, sleep disorders, cognitive impairment, and depression can overwhelm individuals even before diagnosis.

“The short gate, falling, the tremor with my right hand, I didn’t know what was wrong with me. I had depression so bad. I had thoughts of suicide,” said Neil Humphrey, a former wine and beer wholesaler, and a Parkinson’s Project class member.

“I played the piano a lot and my left hand wasn’t keeping up with my right hand. It was fatiguing,” said Randy Devitt, a Seattle fire investigator.

You’ve probably heard the saying "go at your own pace." At the Parkinson’s Fitness Project that pace can be pretty brisk.

“We don’t treat them like their fragile people. We want them to feel strong and powerful and stable on their feet, so we try to promote that,” said Coomer.

When you see someone with tremors or difficulty walking, you might think of them as frail. When it comes to Parkinson’s, vigorous exercise has been shown to be one of the only ways to slow the progression of the disease.

“We know we need consistent exercise. It can’t be just one or two days a week and that’s where the Daily Dose really helps out because once they leave the clinic, people are able to take exercise with them and guidance through videos and live streaming,” Coomer said.

The Daily Dose is Coomer's vision of photocopied exercises your physical therapist might give you at the end of an appointment. Coomer signs you up for a library of Parkinson’s centric exercise videos available anytime anyplace.

For those who need even more exercise love, they tune in live, like Noel from Puerto Rico.

“You can work on you're deficiencies you have, the balance, like for me, I’m beginning to have trouble with the balance,” said Noel.

“If I wanted to go to an exercise class I’d have to drive about 30 miles, and we’re still having winter,” said Wendy from Alberta, Canada.

These participants don’t just build strong bodies they also work on their minds.

Exercise at the project combines motion with a mental workout too.

“Count backwards from 100 by sevens. The average person has problems with that, too,” said Neil Humphrey as he and other members follow Coomer's instruction and countdown by seven, only to start all over again.

Something you might not see at your pilates, yoga or step class is the compassion and comradery Parkinson’s Fitness Project members have for each other.

“It’s a battle, and we’re all in the same boat, and each person’s disease course is individual, but get involved in the Parkinson’s community. Apathy is a trap,” said Randy Devitt.

“This along with the whole Parkinson’s community, they’ve become really good friends. I consider this a support group,” said Humphrey.

“We are able to connect people. We have discussions afterwards. Everybody can join in and feel like they’re part of something a little bit bigger than just themselves,” said Coomer.

“It’s a club that nobody wants to be in, but as long as you’re in it you can support each other," said Devitt.

You can learn more about The Parkinson’s Fitness Project here.