Dogs train in San Juans to sniff out Parkinson's disease

Inside a small trailer at the San Juan County Fairgrounds in Friday Harbor, nine dogs are learning to do things doctors can't even do right now. 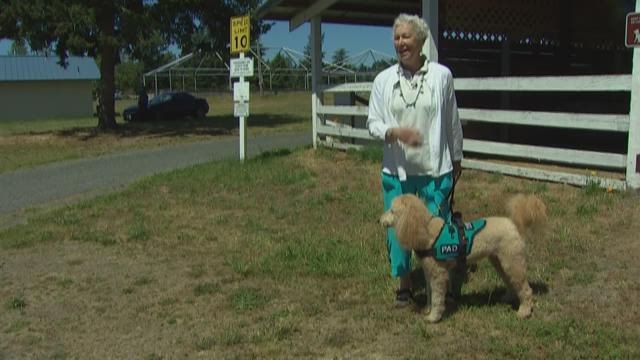 Rowan, a 5-year-old Goldendoodle, doesn't know it, but she's on the trail of groundbreaking field work that could change the lives of countless people around the world.

Inside a small trailer at the San Juan County Fairgrounds in Friday Harbor, Rowan and eight other dogs are learning to do things doctors can't even do right now.

They're learning to sniff out and detect Parkinson's disease. It's a sort of med school for mutts.

“I could actually start crying when I think about it,” said Lisa Holt, founder of Parkinson’s Alert Dogs (PADs). “It’s amazing to us. It’s just amazing.”

Holt is a dog trainer and certified instructor who specializes in teaching dogs to follow scents.

She is leading what is believed to be the only training of this kind in the United States. Dogs are being taught to smell otherwise undetectable traces of Parkinson’s disease.

It's done essentially the same way experts teach dogs to detect drugs and other diseases.

One of the symptoms of Parkinson’s is a secretion through the skin called sebum found around the face and neck. People can’t usually smell it, but dogs with senses of smell up to 100,000 times stronger than those of humans can.

By the time most people are diagnosed with Parkinson’s, it’s too late to turn it around. So, man’s best friend might be man’s best hope to detect the disease before it does too much damage. Early detection would provide an opportunity for doctors to add years, maybe decades of quality time to patients’ lives.

“If those dogs could detect the disease long before you had a symptom it could be a miracle,” said Nancy Jones, whose husband, David, has been battling Parkinson’s for 17 years.

The Jones and many more families dealing with the disease are volunteering in Holt’s study. They swab themselves down with cotton clothes and send her the samples.

Holt puts a serum-contaminated cloth in an aluminum canister in one corner of the trailer at the fairgrounds. Three other canisters are the control group.

“We’re basically proving to ourselves that dogs can detect Parkinson’s,” she said.

Jean Allenbach, Executive Director of the Northwest chapter of the American Parkinson Disease Association, said she is “hopeful and excited” to see the results of Lisa Holt’s work.

“Knowing we’re on the path to potentially help many thousands of people who could later on be suffering with Parkinson’s, it’s a pretty big deal,” she said.

Now, she and Rowan vow to keep on their path so others might not know her pain.

“It can just give hope to people that something is happening,” she said. “It’s too late for us, but not for others.”

You find out more information by contacting PADs at sanjuanlisa@gmail.com and here.